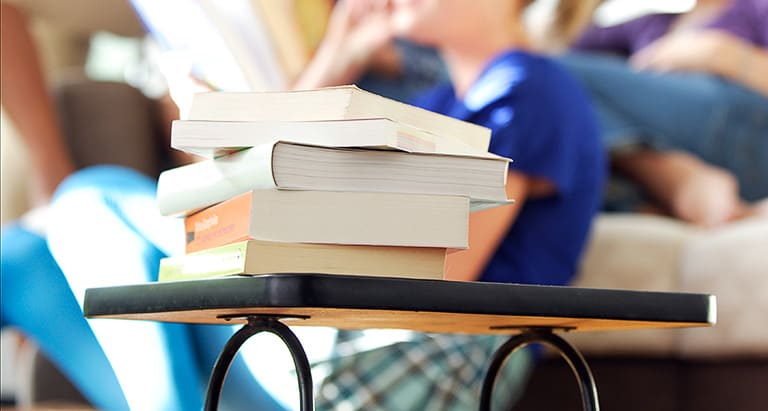 Who had time for a women’s reading group when life was already too busy? This writer took a chance and found out how much she’d been missing.
By Kate Kelly

Six years ago, when my friend Gretchen told me her book club was looking for a new member, I hesitated. I’ve never been a joiner; I’m wary of groups and not keen on activities that make demands on my already scarce spare time. On a typical night, I’d arrive at my suburban home from my full-time job in New York City at around 5:30, grab the car keys, and dash off to pick up one kid from soccer practice and another from a playdate. Back home, I’d rustle up dinner while the kids got started on homework. As it was, I felt guilty that I wasn’t more involved in the PTA or with church activities, that whenever possible I volunteered to bring paper cups instead of cupcakes. Did I really need another obligation that I’d end up neglecting?

There was also the fact that, while I’ve always been an avid reader, I barely had time for the books I chose for myself. What guarantee was there that I’d like a book chosen by others? Which brought me to another downside: I’m not someone who likes to take social risks. I’d be embarrassed if I picked a book no one liked. And talking in a group among people I don’t really know? Not my thing.

On the other hand, my reading list was in need of an upgrade.

Left to my own devices, I favored beach reads and page-turners—fun while they lasted but quickly forgotten. I almost never cracked those long, prizewinning works of serious literature that book groups are known for assigning. And while I had plenty of friends, it’s not as if we were having leisurely heart-to-hearts over a glass of wine; it was more on the order of quick catch-ups at the soccer game about kids, work, or the state of the lawn. I missed those rambling, soul-searching conversations—about movies, relationships, politics, and, yes, books—that were so common in my college and early-career days. Busy as I was, something was lacking in my life, a connection I longed for. Maybe a book group would fill the void.

“Joining a club, being part of a group, makes us feel like we belong to something bigger than ourselves,” says Melody Warnick, author of This Is Where You Belong: The Art and Science of Loving Where You Live. “Anything that connects you to other people in the community makes you more invested, which deepens your satisfaction with where you live and how you feel.”

I told Gretchen I was in (at least for now) and she gave me the lowdown: Next book up was Atonement, by Ian McEwan. The meeting was at Natalie’s house, just a few blocks from my own, though our paths never crossed.

Atonement was exactly the type of book I would normally never pick up.

It looked so. . .serious. And the story, which centers on a 13-year-old girl, Briony, whose poor judgment sends her sister’s boyfriend to prison for a crime he didn’t commit, was far from my comfort zone. In general, I steer clear of books and movies about false accusations; I find them simultaneously disturbing and contrived. (Sorry, Othello, The Crucible, and all those stirring documentaries about innocent people who spend decades in prison.) But I plowed through it, despite my discomfort, and looked forward to the meeting.

The appointed Thursday came, and I left the bedlam at my house and arrived at Natalie’s, where the vibe was calm and adult. She made quick introductions and pointed me toward the elaborate spread on the coffee table. I helped myself to some cheese, poured myself a glass of wine, and headed for the couch, where one member, Jenna, was settled in a pair of striped pajamas and slippers. She explained that she was always cold and liked to feel cozy. Two moms I vaguely recognized confessed they hadn’t finished the book; they’d come to chat and drink wine and didn’t mind having the ending revealed. Another member, Liz, popped in to say hi and apologize for not staying because her husband was stuck at work.

I was starting to think that this was a superchill club until Natalie (who’d chosen the book) pulled out her laptop and began reading background info on McEwan to kick off the discussion. This, I realized, was not one of those clubs where the book was just a pretext for a girls’ night out. People had come prepared to discuss everything from the meaning of the title to the ambiguity of the ending.

Gretchen had an insight about Briony’s actions as an adult that cast the novel in a whole new light for me, and I felt a rush from using a part of my brain that had been dormant for way too long. Best of all, when I confessed my discomfort with the unjust accusation angle, the others found it fascinating rather than narrow-minded.

The group’s warmth, the ease of conversation, and the “anything goes” lack of judgment made me feel I was among people I’d known for years. “Wow,” I thought. “I’ve found my tribe.”

For years, we met unfailingly, working around scheduling glitches— basketball tournaments, vacations, kids’ birthdays—to find dates that worked for everyone. Amid packed schedules and canceled appointments of every other sort, our book group chugged along on its built-in momentum. Absences were rare. “Somehow, the responsibility of being in a club gives you the permission to do something for yourself, even when you’re pulled in a lot of different directions,” says Irene S. Levine, PhD, author of Best Friends Forever: Surviving a Breakup with Your Best Friend.

It was enriching to be part of the larger conversation that book lovers everywhere were having, but, for me, the social piece was the real payoff. Too often (and I know I have lots of company here) I put socializing on the back burner. “Over the past 50 years, Americans have been slowly shedding a lot of the regular social activities that bound us to our communities. We have the illusion of a rich social life because of our Facebook friends and Instagram followers,” Warnick says. “But seeing people in person provides a stronger emotional boost than interacting online.” Each meeting was a lifeline that drew me closer to the other women.

My longtime membership in the book club turned me into a more ambitious reader than I’d been on my own.

And of course it helped forge irreplaceable bonds with some wonderful women. So a couple of years ago, when I moved from my New York suburb to Pittsburgh, I suffered epic separation anxiety. Worse, with no smart, penetrating discussions to motivate me, I reverted to my junk-food diet of easy reads. My mind was growing fat and lazy. Something had to be done.

Book groups, perhaps uniquely in today’s social media–oriented world, tend to operate by word of mouth, so it can be tough to find one when you’re the new girl in town. I figured I’d stumble on one eventually, but I was impatient. So some colleagues and I formed a club that meets every six weeks in our office’s conference room. Getting back to a more elevated reading list was a relief, and it’s been a treat to get to know my co-workers in a deeper way. Who knew that the guy in PR had such a dry sense of humor?

I just finished our latest pick, Commonwealth, by Ann Patchett. The novel, about siblings in a blended family, begins in 1971 and spans 50 years. It struck such a chord that I finished the book and immediately turned to the first page and began rereading it. (I don’t remember the last time that happened.) I can’t wait to find out if the others love it as much as I do. Either way, it will be a great discussion. And I’m even bringing homemade cupcakes.


A book group discussion is almost always accompanied by tempting refreshments. These tips will keep you from blowing your SmartPoints budget.

When You’re a Guest


Avoid mindless munching. Handfuls of M&M’s here and a few chips there can quickly add up. You’ll be more mindful of what you’re putting in your mouth if you eat only from a plate. Sit strategically. Pick a seat that’s farthest away from the snack-laden coffee table. Beware the “It’s a special occasion” trap. Book group is about connecting with friends; that should be the focal point.

When You’re the Host


Don’t go overboard. Of course you want to provide a nice spread. But the guests may not eat much, leaving you with loads of leftovers. Notice how much people consume when others host and plan accordingly. Balance richer treats with healthy options. Chances are good that you’re not the only one who’ll appreciate less-fattening fare. Flavored seltzers or pitchers of water with ice and lemon slices can be a nice addition. Don’t serve your trigger foods. If you can’t resist chocolate, don’t offer it. And there’s nothing wrong with picking a cheese you don’t like as long as you know others do.

RELATED: Why Reading May Help Your Stress Slip Away