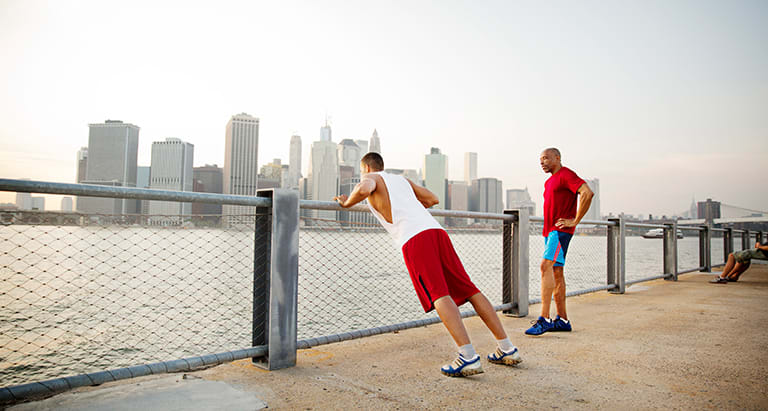 The One Thing You Should Do Before Exercising Outside

Checking your local air quality can protect your health. Here’s why.
By Maria Masters

It’s always a good day to exercise—but when it comes to fitting in a workout, some days are better than others.

About two out of every five people in the United States are exposed to unhealthy levels of air pollution, according to the 2017 State of the Air report from the American Lung Association (ALA). Among the biggest offenders: particle pollution (or microscopic irritants) and ozone—a gas that forms when pollutants react with each other in sunlight. Both of which may increase your risk of lung infections, heart disease, and more.

“I recommend people check their local air quality,”says Brian Christman, MD, a spokesperson for the ALA and the associate director of the medical residency program at Vanderbilt University Medical Center. “In major cities, it can fluctuate fairly abruptly.”

Yifang Zhu, PhD, a professor of environmental health sciences at the UCLA Fielding School of Public Health, suggests that people check the Environmental Protection Agency’s website, AirNow.gov, where you can find real-time updates of your local air quality. If the air index is coded yellow—meaning that the levels are acceptable for all but a small portion of the population—she says to think twice about going outside. If the index is coded orange—which indicates that the levels are “unhealthy for sensitive groups”—she says to take your workout indoors.

How Air Pollution Can Affect Our Health


Thing is, you don’t have to be surrounded by smog to experience pollution-related health problems—even a small accumulation of air pollution can shorten our life span.

For example, after the Acid Rain Program was started in 1995—which capped the power industry’s output of one pollutant, sulfur dioxide—the percentage of deaths within a 100-mile radius of power plants declined by 5 percent in people aged 35 to 64 by 2005, according to a 2017 study from the National Bureau of Economic Research.

“People who are exposed to gradual amounts of pollution over their lifetime are more likely to die as they age, especially when they age past 45 years old,” says one of the study’s authors, Alan Barreca, PhD. In fact, Barreca says that the Acid Rain Program saved more than 30,000 lives in 2005—just one year.

Other studies have found that exposure to air pollution can raise blood pressure, trigger asthma, and increase occurrences of anxiety and other respiratory ailments.

The bottom line: You don’t have to barricade yourself indoors all day, but you should take some precautions.

3 Ways to Protect Yourself from Air Pollution During Your Workout


1. Stay away from major highways


Gas and diesel emissions from cars, trucks, and SUVs can release pollutants like particulate matter, nitrogen oxides, and volatile organic compounds into the air. Dr. Christman recommends working out at least a quarter mile away from crowded roads. At the very least, says Dr. Zhu, try to exercise upwind of the traffic.

2. Exercise early in the morning


Bad ozone develops when the gases from vehicle tailpipes, lawn mowers, and other sources come into contact with sunlight, which is at its highest during the middle of the day. Try to schedule your run for the early hours of the morning, before the sun is at its peak. “If you go for a run during rush hour, when all the cars are out, you’re taking deep breaths of the worst-quality air of the day,” says Dr. Christman.

RELATED: Why Now is the Time to Become a Morning Exerciser


Not only are parks located away from the bustle of high-traffic areas, especially in big cities, but the trees and other plants can help filter out air pollution particles, Zhu says.

Whatever you do, don’t trade in your walk for a Riverdale binge. Both Dr. Christman and Zhu say that outdoor air pollution shouldn’t keep you from exercising. “Use a stationary bike at your house, or go to the local YMCA,” says Dr. Christman.

And, if you do choose to exercise indoors, it never hurts to buy an air purifier.

RELATED: 5 Moves to Turn the Park into a Gym