Recently, Gary and I renewed our wedding vows in in Las Vegas. I wore a red lace dress and had a blast! 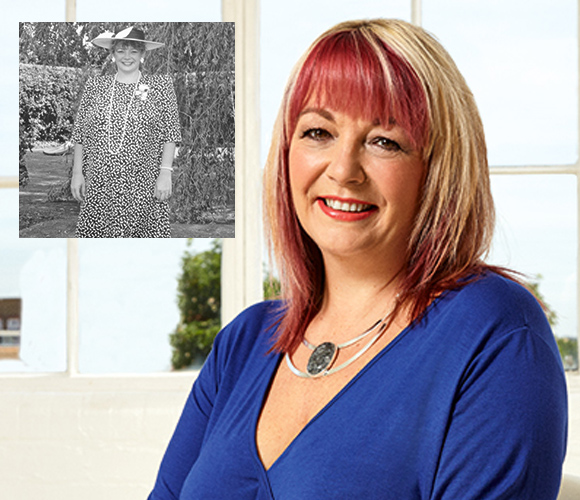 "I am fitter, healthier and more positive now in my 50s than at any other point in my life. "

Sue spent most of her life feeling sad and overweight, but now she’s in her 50s, she’s feeling fitter and foxier than ever.My 20s were not a good period of my life. When I see photos of myself, I look old. I was stuck in a rut in a deeply unhappy relationship and comfort-ate my way through it. I gained more weight after the birth of my two sons, and as I reached 16st, my confidence hit rock bottom. If I could go back, I'd urge my 25-year-old self to lose weight. If I'd been a size 8, there's no way I would have put up with my husband's behaviour.

I hid from the world I'd always struggled with my weight. Even as a child at school, I was 'Big Sue'. On the outside, I was bubbly and never short of friends, but inside I was insecure.I turned down a music scholarship at college in my late teens because I felt I wasn't good enough. I'd always cover myself up in baggy clothes. I hated shopping and lived in men's shirts and jackets. One time in Marks & Spencer, I had to be cut out of a bra by the manager because it had got stuck as I was trying it on. I was utterly horrified. In short, I hid from the world as much as I could and was very depressed.

The love of my life My marriage ended in my early 30s and I was lucky to meet the love of my life, Gary, soon afterwards. He didn't have a problem with my weight. We married when I was 32 and had a daughter, Anna. I was still large, but so much happier that it didn't feel like a problem.

Something clicked But as I hit my 40s, I started to suffer with endometriosis and was told I'd need a hysterectomy. I resisted for as long as I could, frightened that the op would make me put on more weight. But then a friend said to me, 'Having this operation doesn't have to be the end. It can make a positive change to your life', and something clicked.

More positive than ever! I decided to go ahead with the surgery and after I'd recovered, I joined WW, determined to crack my weight problem once and for all. I've never looked back. I am fitter, healthier and more positive now in my 50s than at any other point in my life. Say the word 'party' now and I'm there.

Renewing our wedding vows Recently, Gary and I renewed our wedding vows in the Graceland Chapel in Las Vegas. I wore a red lace dress and decorated my hat, shoes and handbag with red cherries, and had a blast. I look at those photographs and I can't believe that the woman with the beaming smile in Las Vegas is the same woman who looks so sad and old in her 20s. I'm just so glad I did something about it.

1. Don't get stuck in a rut A deeply unhappy relationship in my 20s led to comfort eating and weight gain.

2. Seize the day! As I reached my 40s, something clicked and I decided to make a positive change.

3. Show off your shape When I was younger, I covered up a lot, and as a result, I looked so much older than I actually was.