Peter: How I went from fad diets to fit dad 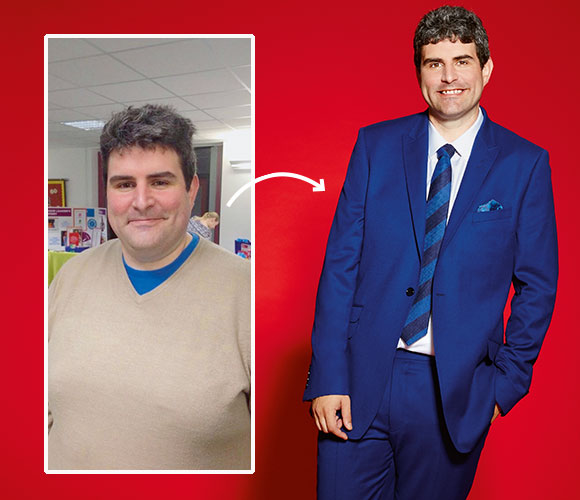 "All I’ve ever wanted was to live a normal, healthy lifestyle and, for me, WW was where that started."

Fast food sector Working for Domino’s isn’t easy when pizza is one of your favourite foods and you have access to it, for free, all day long. That was definitely part of the reason I found myself standing in my boss’s office weighing 30st and struggling to do my job.

But it wasn’t the whole story, which began when I was at college. For the first time in my life, I was living alone as well as studying for a HND in computing, and I was struggling with both. The pressures of the course combined with a lack of social confidence meant that I became increasingly isolated. My weight was going up and I was completely oblivious to it. I was grabbing the wrong things and eating them in large quantities. Ever since I was a small child, I’ve loved my food and found it a real source of comfort. By the time I reached my final year of college, I had sunk into a deep depression. I failed my course, moved back home and had to start again.

That was when I joined Domino’s, at first as a delivery driver. I liked the company and the friendly culture, and within a few years I’d worked my way up to be the manager of a store.

The constant access to free food meant I never had to cook. I would have cereal and toast slathered in peanut butter for breakfast. For lunch, I would have a large tandoori hot pizza with extra cheese, and a side of chicken wings and wedges. And in the evening, I would order a Chinese or Indian takeaway or stop off at the local petrol station and get a sandwich, crisps and a cake.

Meal replacement diet That was what led me to that painful conversation in my boss’s office. Being a store manager involved a lot of standing and the weight on my knees was making this very difficult, which was affecting my ability to do the job. My boss had had problems with his weight in the past and had tried a meal replacement diet, and he suggested we do it together.

I started losing weight in January 2008 and by the October, I was down to 15st 5lb. But as soon as I started to eat normal food again, I began to regain the weight. I hadn’t learned how to eat healthily and the old habits crept back. Within a short time, I was back up to 18st.

By this time, I had met and married my first wife but, from the outset, there were cracks in our relationship. We had a daughter, Bethany, now five, but as it became clear the marriage was over, I started to feel low and withdrawn.

Old colleague, new beginning Around this time, an old colleague and friend of mine, Ruth, returned to the company. She had known me when I was at my biggest and, at first, she was a shoulder to cry on. But over time our relationship developed into more than just friendship and we made the decision to be together as a couple. Our two children, followed soon after. Ruth and I were happy but tired new parents, and would eat whatever we could get our hands on. We did eat more home-cooked food, but we had no sense of a normal portion size and were both gaining weight.

Reality struck In July 2013, I stood in front of my wardrobe trying to find something to wear and realised that none of my clothes fitted me. That was my moment of realisation. I either had to buy a whole new wardrobe or, once and for all, I had to take control of my eating patterns.

Joining a WW Workshop My parents had lost weight with WW and were now both at goal so, weighing 23st 11lb, I joined as an online member. I did quite well and managed to lose around 3st, but then the scales stopped moving and I could feel myself losing focus. Ruth stepped in and said that if we were going to do it, we needed to go to a WW Workshop. So we both found Workshops that could fit into our busy lives. Ruth’s is close to home and mine is close to work.

The first thing we learned was sensible portion control. We also added fruit and vegetables to every meal to help us feel full and swapped all our snacks for healthier ones. At around this time, a friend of ours gave us a dog and I took him out for a 30-minute walk every day.

Gradually, our walks got faster and longer. Now, they’re runs of around 45 minutes every day. Exercise really helped with my weight loss and, motivated by my Wellness Check-in, I started to lose weight every week.

Kitchen makeover Ruth and I have completely transformed the way we eat at home. We rediscovered the kitchen and found that it could be a fun place to be. Most evenings, we find a new recipe from a WW cookbook or the magazine and try it out together. We often cook enough for four people and store some for the kids’ tea the next day or freeze extra for the days we don’t have time to cook.

We both still love pizza, and treat ourselves around once a month, but now we’ll split a medium pizza and eat it with salad. It dawned on me that not everyone who walks into our store for a pizza is 30st, so having treats is something perfectly normal.

Everything in moderation My new philosophy is that everything should be enjoyed in moderation. I am still adapting to my new body. I sometimes squeeze my waist to remind myself that I don’t have a tummy any more and I still go to my weekly WW Workshop to keep myself in check. Ruth is about 1st from goal now and we continue to support each other.

I don’t think depression is something you ever shed entirely. It’s been there for a long time and I still do get days when I feel low. The difference now is that I don’t find myself going back to food for comfort. I try to remember the simple things like going for a run, knowing that getting the endorphins pumping will help me. All I’ve ever wanted was to live a normal, healthy lifestyle and, for me, WW was where that started.