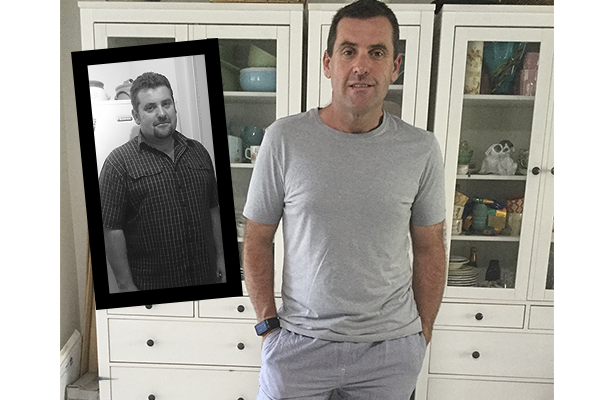 Michael has maintained a weight loss of nearly 5st for over two years – while still enjoying life to the full. Here he explains how his world opened up to new possibilities.

A wakeup call from his GP


In 2015 I’d been struggling with poor self-image and several health problems, so I decided that 2016 was going to be the year for facing up to the truth about myself. I took myself to my local GP and gave him my list of health concerns (bad knees, cloudy vision, strange chest discomfort). My cholesterol and blood pressure were elevated: slightly higher and I would have needed medication. He told me I needed to lose 5-6st to get into my healthy weight range for my height and age.

I realised that I had abdicated my responsibility for my health to others when it was my own responsibility. I remembered my mum's journey with WW and that's when I decided to check it out. I didn’t want to continue on this dangerous path to ill health. I had my wife Kelli, to think of; not to mention my four beautiful kids: Felicity, 29, and my three children with Kelli – Grace, 19, Toby, 13, and Nicolas, aged nine.

Being welcomed with open arms


That first week, despite being the only bloke, everyone was so welcoming – and by my second workshop I’d lost 6lb. The week after I’d dropped another 6lb. That’s when it became fun. I re-educated myself about nutrition and portion sizes. I threw out any notion of WW being a super-strict way of eating as fast as I was throwing out clothes that were rapidly becoming too big.

I lacked the confidence and zeal for life that I had when I was younger, and I’d become more withdrawn from social outings. One thing that surprised me on the programme was that as I was changing on the outside, I was changing on the inside: becoming more positive, confident and happy with myself.

When I had lost 4st 10lb, I was amazed that small changes can make a big difference. What seemed like an impossible journey when I began turned into a great accomplishment.

How did you stay motivated?


I took it one day at a time, tracked my food and went to the WW Workshop each week, putting the advice into practice. The key for me was the support and encouragement I received through my Workshops and the WW app.

“I hadn’t seen these particular Year 9 students for six months after my contract had ended, but when I took on a casual position at the same school, their reaction to seeing me again was astounding. ‘Is that really you, sir?’ They looked at me wide-eyed as if their teacher had fallen victim to something like Invasion of the Body Snatchers. As for me, I could only grin in reply, thinking, ‘Is this really happening to me?’ But it was. It was the same when I spotted a former colleague down a corridor and waved to her. I could see her asking a student next to her who I was. The fact that my transformation was causing such a stir was unbelievable. And I was loving every minute of it!


I used to reward myself with junk food like hamburgers and fries and Coke on the way home from work, and if I’d had a stressful day I’d comfort myself with high-sugar foods. I became a couch potato, too. When I began my journey with WW I started eating more fruit and veg, and began to drink lots of water.

The FitPoints® aspect of the programme helped me to see all movement in terms of the benefit it could bring me. Now I love walking first thing in the morning and monitor all my exercise on my Garmin. Every day I aim to exceed my steps goal and have synced my watch with my WW app so it records my activity automatically. I love outdoor activity - the more variety the better! Cycling, running, swimming laps, kayaking and playing football.

I also park further away from the shops so I have to walk, and I try to get involved with the kids more at home and school because it keeps you young!

A programme for life


I love the expanded range of ZeroPoint™ foods and how you're guided to eat more healthily and in a more fulfilling way. It takes the pressure of tracking everything I eat and gives me power to make good choices.

Losing weight can often be associated with feeling hungry, but this programme gives you options that provide more satisfaction.

Since starting, I’ve had some major life changes that have affected my journey, but I’ve retained the confidence and resilience that I’ve developed on the program.

A new outlook on life


I used to always be concerned about eating out and blowing my SmartPoints® Budget but now I have so many more food options that I can choose and be healthy. I’m more relaxed and less inhibited than before. I eat out and just adjust my food the next day. It’s very important to me that nothing’s off limits, so if I want sticky date pudding (and I do!), I’ll have it.

I don’t limit myself anymore. I don’t think, ‘I can’t do that’. Instead I say, ‘Yes, I’ll give that a go.’ That means my social life is more active, I’m far more sporty than I ever was with jogging, cycling, playing tennis or badminton or kicking a ball around with the kids.
That self-pitying couch potato has disappeared and I’m far more engaged with the kids these days because I’m being active with them.

I use Connect for inspiration and know that I can bounce back if I have an off day. I’ve been a teacher for 22 years, and now I’ve maintained this weight loss I’m seeing the possibility of mixing things up and doing something different. I would never have had the confidence to do that before. I’m living a higher life where every day is a new adventure and where I’m looking forward to turning 50, not dreading it. The future’s bright and it’s only going to get brighter.”

What do you love about being a WW Coach?


It’s such an honour to be part of people's lives and help them on their journey. I’ve been a WW Coach since August 2016 and have three regular WW Workshops.

How are you incorporating ZeroPoint foods at home?


Chicken breast and salmon are my new best friends for lunch and dinner! In the morning I love eating eggs for their protein and filling value. When I build my day around these foods I’m able to keep my SmartPoints down.


Ice-cream! And a few beers at a barbecue.

What was it like being in the WW TV ad?


I hope it’ll encourage my family, friends and members that anything is possible. My WW journey has been life changing: it's not just about losing weight but finding yourself.

How has your mindset changed?


I’m much stronger and less susceptible to negative feelings. Something has clicked: I just won't put up with the old mindsets. I now teach my members to break that cycle of worthlessness, too.

What are you proud of since prioritising your health?


I’ve set a healthy example for my family; they’ve adopted better habits as a result. Taking back control and responsibility has empowered me to be more effective in other areas of my life. I feel like I’m living the life I dreamed I would and I know the future is only going to get better. I want to live an abundant life and help others achieve that too. Not necessarily an easy life, but an adventure.

It’s easy to personalise the programme. Only you can provide the motivation, the self-discipline and the goals that will help move you towards them becoming a reality.

Develop perseverance and enjoy what the Workshops offer. Make mutual friends who will encourage you on your journey.

Become your best self

You’re important and you’re worth it. Become the best version of yourself that you can be.