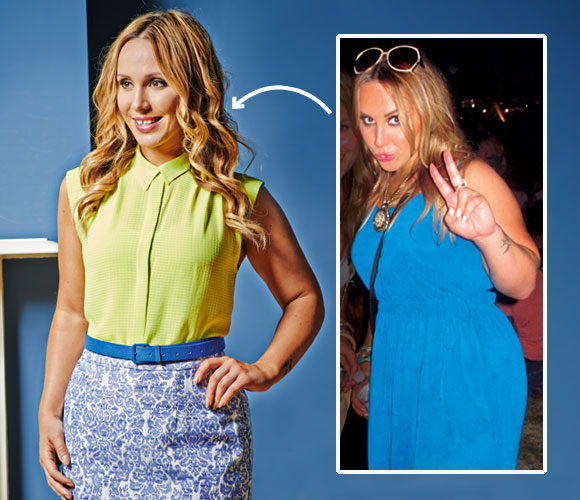 "I feel totally confident about meeting new people now and I know that's down to feeling more confident within myself. "

Celebrity make-up artist Lyndsey felt out of place beside her showbiz friends. But she made her new healthy-living plans work with her life and transformed her body.

It all happened so quickly. I moved to London to help boost my career – I was doing bridal make-up back home in Lincolnshire, but my passion lay in the showbiz world and London was the hub of it all. Once there, my career began to take off. It was an incredibly exciting and busy time. I spent my days on photo shoots and my nights attending networking parties.

Celebratory shoots At the shoots there was lots of food available and, as the novelty of it excited me, I ate way more than I needed. Breakfast would be croissants, lunch a pizza or sandwiches and then I'd snack on crisps all day in an attempt to keep my energy high. At night I'd skip dinner, instead choosing to drink the champagne and cocktails on offer and munch on canapés.

My new lifestyle saw me gain weight rapidly. My weight shot up to 13st within a year and, as I'm 5ft 3in, it really showed and affected my confidence terribly.

As part of my work, I do make-up for celebrities such as Denise Van Outen and the girls from The Only Way Is Essex, so I was constantly in the company of women with the most perfect figures. I couldn't help but compare myself to them and it left me feeling awful.

My low confidence stopped me from enjoying the parties as much as I should have and I'd drink more to feel better about myself. Soon I was stuck in a vicious circle: at night I'd drink my worries away and in the morning I'd eat to cure my hangover.

What I couldn't admit was that the way I looked and felt about myself was completely my fault. I was the one who chose to eat as much as I did, who wouldn't work out or eat healthily. I'd moan how unfair it was that I didn't look like the women around me when, in reality, they worked hard to look as good as they did.

Holiday blues The final straw was a holiday to Ibiza with a couple of friends. As they played by the pool in little bikinis, I stayed glued to the sun lounger, covered up in a floor-length kaftan.

As soon as I got home I went to see my mum and broke down in tears. She was really honest with me and told me I needed to change my entire attitude to food: I had to stop crash dieting for good and have a lifestyle overhaul.

Reality check  That's where WW came in. I signed up to Digital and found that even when I thought I was eating healthily, my portions had been far too big. I cut them back and also began going for long walks with friends to increase my activity.

The temptation to eat was still all around so I had to change my mind-set. On shoots I'd have a small plate of the healthiest item on offer, usually a wrap or a salad, track it and then leave the table. I told myself that just because the food was there it didn't mean I had to eat it!

Before I started WW, I'd been drinking way too much alcohol, so I cut down on the number of parties I was attending. I chose to visit my mum or the gym instead. Once I saw the difference it was having on my body and mood, I knew it was worth it. And, of course, I made sure to treat myself! Each weekend, I'd use my weekly allowance on a night out, with a couple of cocktails and a cooked breakfast the day after.

Small steps I felt as though I had a good balance of eating healthily and enjoying myself that I hadn't experienced when crash dieting. WW broke it down into manageable chunks: I'd focus on the next half stone or dress size, with the longer-term aim to fit into a favourite red dress in time for a friend's wedding in January 2013. Having that focus meant I rarely strayed from the plan, even over Christmas, and reached goal just in time.

Now, I'm no longer constantly thinking about my body or comparing myself to other people. Work is going better than ever and I've even opened up my own make-up academy (Lyndseyharrison.com), offering tutorials to aspiring make-up artists. It feels so good to stand up in front of a big class and not worry at all about my weight.

It's also given me the confidence to start dating again, after four years of being single. I feel totally confident about meeting new people now and I know that's down to feeling more confident within myself. I can get on with enjoying life again and it couldn't be better.

I couldn't have done it without:

Healthier You: The danger of not knowing what's going on!