"For Graham (left) and Andy, love triumphed over temptation as they got healthy as a couple" 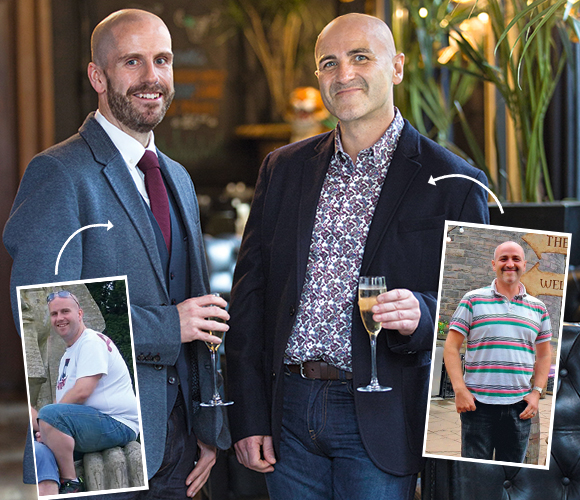 Graham says: By the age of 23, I was probably around 18st, but my weight was getting out of hand. My problem was portion sizes and comfort-eating. I was very reserved and I’d shy away from new situations.

I didn’t come out as gay until I was 28, just before I met Andy, which tells you something about how I felt about myself. At my largest, I was wearing XXXXXXL clothes.

When I met Andy in a pub at Christmas 2009, we hit it off and moved in together just a couple of months later. That’s when I piled on even more weight. We both love food and Andy is a trained chef, so most nights, he’d make a big dish of delicious food and we’d share a lot of wine. But we were happy and in love.

After my mother’s birthday party in 2013, I finally decided to do something. Andy and I were the biggest people there and, while no one said anything, I felt embarrassed.

I told Andy that I was going to join WW and was delighted when he said he’d join, too. I was stunned when the scales tipped over 25st at our first WW Workshop, but overjoyed when I lost 9lb after the first week. Our WW Coach, Jo, set me small targets, and the weight came off gradually. When I reached my goal weight 18 months later, it was pretty emotional.

Being slim has changed my life. I used to be nervous of what other people thought of me, but now, I don’t care.

Andy proposed in 2010 and I knew I didn’t want my wedding pictures taken at that size. Now, our wedding is the next goal, and we are scouting locations. We just want to live happily ever after.

Andy says: When I got together with Graham, the fact that we were both struggling with our weight probably brought us closer. We fell in love and didn’t think about what we were eating, because we were enjoying ourselves so much.

But I was happy when he suggested joining WW. Doing the plan together spurred us on and when I got to goal after 10 months, Graham was delighted for me.

Since WW, our relationship has changed for the better. Before, we’d always stay in and have a meal. Now, we’re always going out. We’re also wearing more fashionable clothes instead of being embarrassed about going into clothes shops, in case nothing would fit us. Losing weight has given us both such a boost in confidence. We’re very happy and our big day will be the final celebration of how far we’ve come.