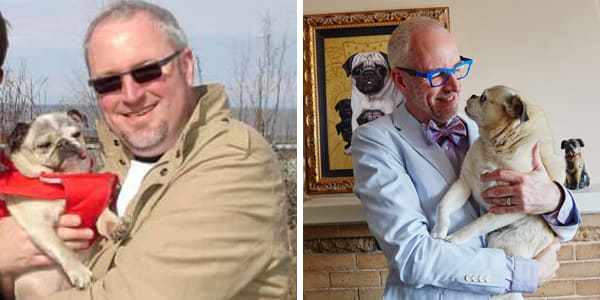 How this stair-climbing, dog-loving WW Coach learned to make healthy choices by tackling one challenge at a time.

*People following the WW program can expect to lose 1-2 pounds/week. Michael lost weight on a prior program and is continuing on PersonalPoints™. Watch Michael's journey of finding success for himself and his furry friends in the video below.

In Michael’s words:
I was that skinny, awkward kid in high school. In college, I started to fill out, and then when I met my partner, Lee, I really started gaining. We had bad habits: We’d go out for cheesy Mexican food; I’d eat the desserts that he’d bake, like brownies and lemon bars; and we’d eat lots of spaghetti. I’d try dieting, but I always seemed to throw in the towel. Then, one mortifying moment in 2006 really made me think about changing.

The turning point
I was volunteering at a pug rescue in San Francisco. I just love pugs — I’ve had nine in my life and I currently have two pug mixes and a rat terrier. At the rescue event, one of the little guys had an accident on me. To stop smelling like Fisherman’s Wharf, I searched for a new pair of shorts. I could only find one pair in that neighborhood big enough to fit me and they were $175, so I decided to wear my stinky shorts all day. I was so self-conscious and I felt terrible. But still, I couldn’t stick to healthier habits. I didn’t make a real change until 2008 when a WW Studio came to my partner’s office, and we decided to join together. I was a skeptic at first since I had already tried so many other ways to lose weight, but I kept my hopes up.

My first WW Workshop
Going to my first Workshop was a little strange — my partner and I were the only two guys there. While it felt odd at first, all of the members made us feel really welcome. As we got to know the group better, it became clear to me that this dynamic was exactly what I needed. It felt comfortable knowing there were people I could relate to, who had similar challenges.

Mexican makeover
What surprised me most about the program was that we were still able to eat the foods we loved. After I realized that, I remember saying to myself, “This is the plan for me.” We’d go out for Mexican food and order the same meals we would’ve before, just altered. Instead of getting the cheese enchiladas with rice and beans, I’d order them à la carte. Instead of eating the whole basket of chips, we’d count out our 14 chips and push the rest away. We stuck with salsa instead of guacamole; we had one margarita instead of three. We made huge savings on points (and money!), and I was still enjoying my favorites.

Saying "yes" to boot camp
I’ve never been active in my life, but when I was about 10 pounds from goal, I started thinking about working out. My body had changed so much from losing almost 50 pounds at the time, and I thought it would be a good idea to add toning to my routine. I found a six-week outdoor boot camp class next to AT&T Park where the San Francisco Giants play. It sounded tough, but they seemed friendly to beginners, so I gave it a try. In just six weeks, I got faster and stronger. So I signed up for another session — and then another and another. I loved that it was outdoors, plus, getting in shape made me feel fantastic. 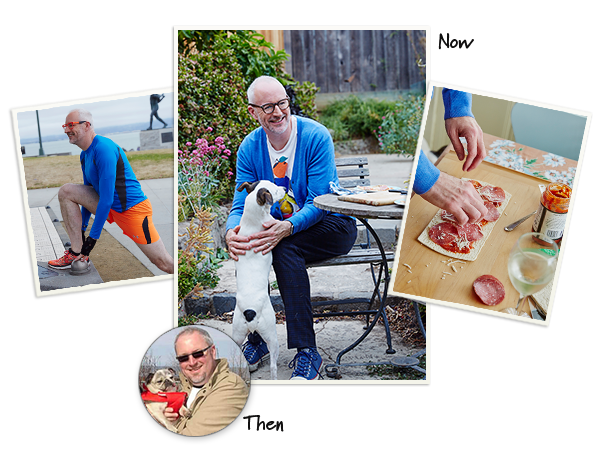 How Michael’s success with WW has improved his life

Running up stairs
We run up hills and stairs during boot camp. Some of the members talked about doing a 52-floor stairway race in the Bank of America tower, and since I was getting stronger, I decided to join them. At first, I didn’t know if I’d be able to finish, but I surprised myself. I had trained for the race, and on that day, I remember just getting into a zone and not really noticing how many floors I was running. Every now and then, I’d look up and see the number sign on the wall and be amazed at how fast I was moving. I planned to have a margarita after I finished, but when I got to the top, all I wanted was water and a banana! The breathtaking view from the rooftop made the hard work even more worthwhile.

Puppy love
My dogs bring me so much joy. They get me out of the house — we walk and hike together — and they help me relax. I have to admit, one of my dogs even went through the weight-loss journey with me! The doctor told Larry, a pug mix, that he needed to lose some weight, so I put him on “doggie WW.” We changed his portion sizes, bulked up his meals with canned, unsalted green beans, gave him baby carrots as treats, and walked him a bit more. I’d post his weekly results on Facebook (Larry’s Inspiring Weight Loss Journey) and told members from my Workshop about his progress. The accountability helped us — and Larry.

A new beginning
My life now is amazing. I’m confident, I have a lot of fun, and I feel great. It’s a totally different me; if I’m not feeling well or I’m too busy to exercise, I miss it. That was never me before. I’ve realized that I’m no longer a number on the scale; I’m just a happier, healthier version of myself.

WW Taught This Teacher to Put His Health First

“Honoring my heritage made me a healthier eater”

How a “Total Dessert Queen” Keeps Up Her Healthy Habits