Sneak Peek! Read the First Chapter of The Shift

The new book from Gary Foster, PhD, WW’s Chief Scientific Officer, will change how you think about your weight-loss and wellness journey.

We practice compassion all the time with our loved ones, but we deserve to give it to ourselves too. Whether you’re trying to lose weight or adopt healthier habits, it’s important to reframe your wellness journey as an act of kindness to yourself, not a punishment for past behavior. The more you repeat the gesture, the easier it is to maintain—and the more likely it becomes a habit.

This small mental breakthrough makes a big difference in achieving your goals, as explained in the first chapter of The Shift, a book about the most powerful mindset changes by Gary Foster, Ph.D., WW’s Chief Scientific Officer. Get a sneak peek of the first chapter below and find out why self-compassion is so essential. Like what you see? Get your copy of The Shift here.

I MUST BE TOUGH ON
KIND TO MYSELF TO LOSE WEIGHT

“What’s the single most important tool for success on the weight-loss journey?”

That’s a question I often open with when I speak at WW workshops, in person or virtually. Then I look around the room—or at all my Zoom squares—and see people gathering their thoughts. Hands go up, members eager to share their answers.

Once everyone who wants to has spoken, I give my answer.

Since it’s unexpected for many of them, even counterintuitive, I elaborate.

“You’re at the starting line of a journey. If part or most of your thinking is fueled by beliefs like ‘I’m disgusting’ or ‘I have no willpower’ or ‘I can’t believe I put myself in this position again’ or ‘I can’t like myself until I lose weight,’ do you think the journey will go well? Does that feel like a good starting place? That’s YOU you’re talking about! Are you feeling motivated, empowered, hopeful? How might it be different if you began the journey with self-compassion rather than self-criticism?” They get it immediately. There’s universal recognition—indeed relief—that there might actually be a better way than self-degradation.

Self-compassion. I imagine you intuitively know what it means. Being kind to yourself, especially when things aren’t going the way you would like. Valuing yourself. Considering yourself worth taking care of. An outlook that frames things not as failures but as chances to learn and grow.

But self-compassion can be difficult to achieve—more so, on average, for those struggling with weight, because of the nasty characterizations that many people in our society make about weight. Many people think that being tough on themselves is the key to motivation, that the whole point of the journey is to fix flaws, and that when they lose weight, then they’ll deserve kindness. I’ve heard it too often throughout my career. I vividly remember Katie, a happily married mom (kids aged ten and twelve) and lawyer in her early forties who wanted to lose fifty pounds. During our first two weeks together, she followed our behavior modification program at Penn meticulously, met her daily goals, and lost four pounds. While she had hoped to lose even more weight, she was pleased with her progress and herself.

Week 3, life got in the way. She was in the middle of a complex case, and her kids had a stomach bug. Katie ate more than she had planned—specifically, three slices of pizza one night and a midafternoon candy bar on another day. She gained a pound.

When she saw me, Katie’s self-assessment was harsh and uncompromising. “This is terrible. I can’t believe I did it again. I ate like a pig,” she lamented. “Can you believe three slices? I’m a terrible role model for my kids. I know my husband is disgusted with me. I don’t blame him.”

The severity of her self-criticism was distressing not only to her but to me. I wondered how an extra slice of pizza could trigger such character assassination, leading her to question her suitability as parent and spouse. In practical terms, I wondered how she could find weight-loss success if each setback was followed by such a vicious self-attack.

Yet when I asked Katie to imagine sitting with a friend who had “messed up” the way she had, and if she would respond to her friend with the same vitriol she aimed at herself, she was quiet. She shook her head. “No, never,” she said.

I hear the harsh statements that Katie and so many others make about and to themselves after suffering a setback in their journey.

I went off track again. I have no willpower.

Would you ever use this hopeless, discouraging tone on a friend who had just experienced a setback? Would you use it with any person you know? With a stranger? If your child used such language about a perceived failure of theirs, would you encourage that tone? Would you consider it productive?

So why do you talk like that to yourself? When you experience a setback, imagine a friend describing it. “I can’t believe it!” your friend says. “I followed the plan; I thought I was doing so well and the scale went up.”

Now what would you tell that friend? Probably something encouraging like, “Don’t be so hard on yourself. Think how much it would have gone up if you didn’t do all that you did.” Or, “Hey, you’ve been doing great! Look where you’ve come from. Hang in there!”

Note that encouragement does not mean lying. The things you told your friend are not made up or fantastical. You’re not fudging facts. You’re being encouraging and hopeful but also honest and direct. A good friend can be realistic and truthful while still being kind. What if you simply extended the same courtesy to yourself that you would to a friend after a setback, particularly if your friend had just spoken unkindly about herself?

“Self-compassion is really just turning compassion inward,” says Kristin Neff, Ph.D., one of the world’s leading self-compassion researchers, codeveloper of the Mindful Self-Compassion training program, and a professor of educational psychology at the University of Texas, Austin. “If you think of what it feels like when you give compassion to a friend who’s struggling, whether they’re feeling bad about themselves or having some challenge in their life, we know what compassion looks like. We know how to use our tone of voice or body language.

We know what to say to be supportive to someone who’s suffering. Self-compassion is simply giving that same type of warm support and understanding to ourselves.”

Extensive research shows that self-compassion “works” and can be applied to help those on a weight-loss and wellness journey. “Clinically, patients who do well over the long-term—four, five, ten years—are those who are basically able to put into practice self-compassion skills,” says Gary Bennett, Ph.D., professor of psychology and neuroscience at Duke University and an expert in digital obesity treatments. 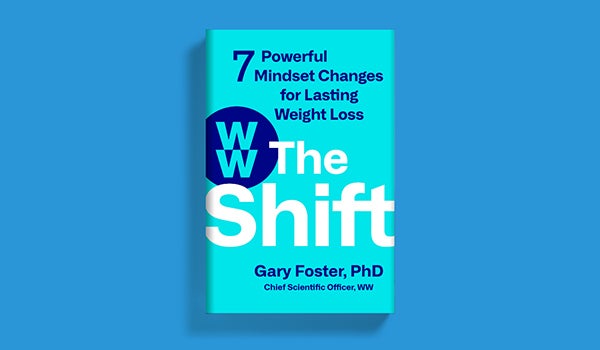 Keep reading The Shift to learn more about the small mindset shifts that will make a big difference in your wellness journey. Get your copy here.