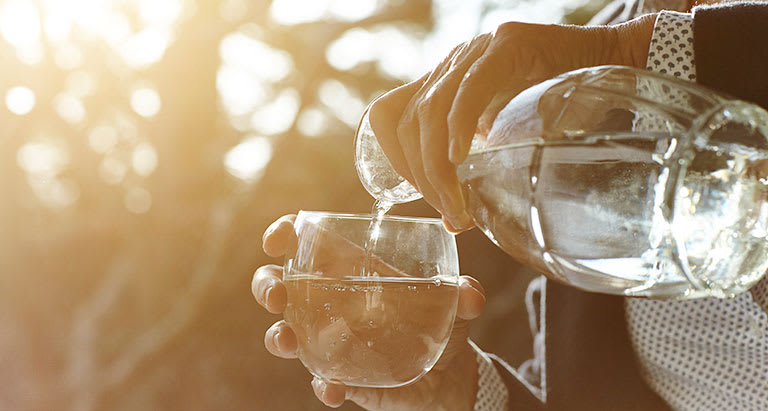 Why You Should Drink a Glass of Water Right Now

These health benefits will motivate you to drink up.
By Mike Carlson

What can you do in the next 60 seconds that will improve your health and help advance your weight loss goals? It's a tough question. A minute of riding your bike may burn about five calories, and it may take you about 60 seconds to chew a mouthful or two of kale. These are good things, but there is something else that is quite simple that you can do in one minute to improve your health:

Under certain conditions, drinking two cups (one pint) of water can boost your mood, metabolism, brain power, and ability to deal with stress. Scientific evidence links hydration to a plethora of health benefits, and the fact is, scientists have just scratched the surface when it comes to understanding all of the roles that water plays in our body.

“I don't even think you can quantify the benefits of hydration. We don't have the data on all the health benefits,” says Jodi Stookey Ph.D., a nutritional epidemiologist specializing in water and hydration effects on chronic disease at the Children’s Hospital Oakland Research Institute in Oakland, California. “Any time you have a thought or feeling, that is mediated by a change in cell volume. That is how nerve cells generate their signal, by shrinking and swelling and changing the concentration of ions in and out of the cell. It is all based on water. If you don't have enough water, then your cell processes are limited.”

Here are just a few reasons why you should drink water throughout the day.

Water may help you lose weight

Last year, Stookey published a literature review in the journal Nutrients that looked at water intake and weight loss. It’s a multifactorial topic with dozens of different scenarios and outcomes. For instance, studies report  that water intake increases the number of calories expended by very overweight subjects, but may not increase the total calories burned for others. Under the right circumstances, though, water can boost anyone's ability to burn fat.

''Drinking water instead of any beverage with calories (including milk, juice, soda, coffee, tea, sports drinks, alcohol) reliably lowers the total calories, carbohydrate, and protein that people consume at their meal, which in turn favors fat burning. Drinking water can also boost fat burning, by improving cell hydration (by improving the cell's response to insulin; by decreasing the cell's breakdown of protein and stored glycogen to amino acids and glucose. Fat burning is suppressed when concentrations of glucose, amino acids, and/or insulin increase).”

“Let’s say there’s someone sitting in a dark room and you hand them a book,” says Stookey. “They can’t read it in that condition, so they get nothing from the story. But if you turn the light on, there you go. It’s like that. You have to have the light on and have the proper conditions for the water to really help you lose weight.”

Stookey believes from her review of studies that one way to potentially turn that light on is to drink water when insulin levels and blood sugar levels are low. Ideally, that means first thing in the morning and between meals while eating plenty of vegetables and protein, but limited sugar and starchy carbs. She says that staying hydrated keeps the fat-burning processes going.

Water may help you feel less cranky and be more motivated

A small study published in The Journal of Nutrition followed dehydrated female subjects when they attempted tasks where learning, reasoning, concentration, memory, and mood were assessed. The study found that most aspects of cognitive performance were not affected by dehydration, but the participants did find the chores to be more difficult compared to when they were fully hydrated, and worsened mood was also associated with dehydration. And in a small study of male subjects in the British Journal of Nutrition, the men's concentration and memory performance declined with dehydration and anxiety and fatigue increased. Comparing the studies, the researchers found that  women experienced worse changes in mood than men when dehydrated and that, for both sexes, darkening mood  may undermine motivation to exercise.

Water may help you beat stress

Today’s world is pressure filled. Drinking water may not lower your credit card interest rate or get your boss to relax, but according to Stookey optimal hydration can limit the effect stress — any stress — has on you.

How Much Water Should You Drink?

The amount of water each person needs on a daily basis can vary depending on size, activity level, and a number of other individual factors. The best way to judge your hydration level is by the color of your urine, says Stookey. You want to drink enough to dilute it until it runs clear. (Yellow = drink more water.)

“In one study, people on a calorie-restricted diet drank 500 milliliters of water, which is about two cups, before every meal. That was associated with significantly greater weight loss,” says Stookey, who says that the very best time to drink two cups of water is first thing in the morning.

“That way, all day long you will be impacted by the fact that you stay hydrated.”