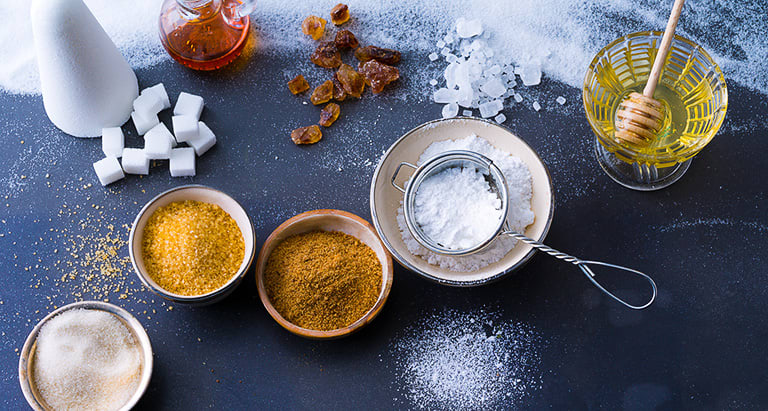 The Skinny on Sugar and Sweeteners

Get the 411 on more than a dozen sweeteners, plus tips from our own recipe developer on cooking with them.
By Leslie Fink

Walk down the baking aisle of your supermarket and all of the sweetener options can be overwhelming. Even plain old sugar comes in a variety of colors, sizes and textures; and then there’s molasses, honey and the more esoteric, agave syrup — not to mention the growing variety of calorie-free sweeteners. So when do you use what, and why?

Here’s the skinny on more than a dozen type of sweeteners, plus tips from WW recipe developer Ronne Freedman on how best to use them.

Granulated sugar
Granulated sugar, AKA the white stuff we spoon into our coffee, comes from the sugar cane or sugar beet plant. It’s a crucial ingredient in baking since it helps food to brown and caramelize; provides flavor and texture; and enhances creaminess.

Coarse grain sugar is used as decorating sugar, regular granulated sugar is used in cooking and superfine sugar (made by passing regular sugar through a sieve) is typically used in beverages and meringues. Powdered sugar, also known as confectioner’s sugar or icing sugar, is made by grinding regular granulated sugar to a fine powder and is commonly used to make icing and frosting, and to dust over baked goods. Powdered sugar typically contains cornstarch which helps to prevent clumping. You can make powdered sugar at home by processing granulated sugar in a coffee grinder.

Ronne’s sweet thoughts:
White sugar is an all-purpose sweetener that doesn’t have much flavor on its own but really enhances the flavor of the foods it’s paired with.
Use superfine sugar when you want sugar to dissolve quickly such as in drinks, gelatins, glazes and whipped cream.
Confectioner’s sugar is the baker’s and candy makers’ sugar. It’s perfect for making icings, candies, whipped creams, mousses and custards.

Once opened, brown sugar is very sensitive to moisture loss, so keep the package shut tight. To soften brown sugar that’s gone hard, place the container of brown sugar in the microwave with a small bowl of water. Microwave for about a minute; if it’s still hard, give it another 30 seconds until softened but not melted.

Recipes often give a packed or unpacked amount. To pack the sugar, bang your measuring cup on a table and then press down with your hand.

Turbinado sugar is typically sold under the brand name “Sugar in the Raw”. It has large, light crystals that can generally be swapped one-for-one for brown sugar in recipes. Muscovado sugar has much smaller crystals and has a strong molasses flavor.


Ronne’s sweet thoughts:
Use brown sugar in baking for that “old-fashioned” touch or as a topping for pies and fruit-based crumbles and crisps since it melts well. Brown sugar adds a deep sweet note to sauces and is delicious in spicy rubs for meat or fowl.
Light brown sugar has a milder, caramel flavor, so it’s preferred in most cookies, breads and crisps.
Muscovado sugar retains the rich flavor of molasses more than regular dark brown sugar so use it when you want an earthy note.

Molasses
Molasses is a thick syrup made from either sugar cane or sugar beet. There are three grades of molasses: mild (very sweet), dark (less sweet with a slight bitter taste) and blackstrap (very nutrient dense, often sold in health food stores as a supplement).

Molasses imparts a strong flavor — and dark color— to baked goods but is not as sweet as sugar, so if you want to replace some sugar with molasses (not more than half the sugar in a recipe), use a ratio of 1 1/3 cup of molasses to 1 cup of sugar. Make sure to decrease the liquids in the recipe by about 1/3 cup.

Ronne’s sweet thoughts:
Use molasses when you want a rich deep note, like in a barbeque sauce or pumpkin hermits. It lends a very heavy, sweet earthy flavor.

Honey
There are many different types of honey that vary in color, taste and texture depending on the type of nectar collected by the bees. Three very common types of honey, all with mild flavor, include orange blossom, clover and alfalfa honey.

Because honey is sweeter than sugar, you can use less of it in a recipe: substitute 3/4 cup plus 1 tablespoon of honey for each cup of sugar. But slightly scale back on the other liquids in the recipe by about 2 tablespoons.

Agave syrup
Juice from the agave plant is processed and concentrated to form a sugary liquid that’s slightly thinner than honey. It’s popular with vegans as a honey replacement and makes a great sweetener for cold beverages since unlike honey and sugar, it dissolves easily into cold liquids.

To bake with agave, use 1/3 cup of agave syrup for every cup of sugar in the recipe and decrease the amount of liquid in the recipe. Some cooks also recommend decreasing the oven temperature by 25ºF.

Ronne’s sweet thoughts:
Use agave syrup when you want a honey-like sweetness without a strong honey flavor.

0-calorie alternatives: can I cook with it?
Sucralose is made from sugar but the body cannot digest it so it doesn’t provide any calories. It’s marketed under the brand name Splenda, is approved by the Food and Drug Administration (FDA) and is about 600 times sweeter than sugar. Splenda is sold as a granulated powder and works well in cooking and baking. Substitute Splenda cup-for-cup for sugar in recipes.

Stevia is a zero calorie sweetener harvested from a wild herb that’s anywhere from 100 to 300 times sweeter than sugar. It’s sold in powder and liquid form as a supplement in health food stores. It works well in cooking and baking and has been used overseas for years. It was approved by the FDA in January 2009 for use in products in the US; it’s also known by brand names Truvia and PureVia.

Aspartame is an artificial sweetener sold under the names Equal and Nutrasweet. It’s about 180 times sweeter than sugar but loses its sweetening power when heated and therefore cannot be used in cooking and baking. It’s best used in beverages and no-bake desserts and puddings. It has been approved by the FDA.

Grilled peaches with almonds and honey