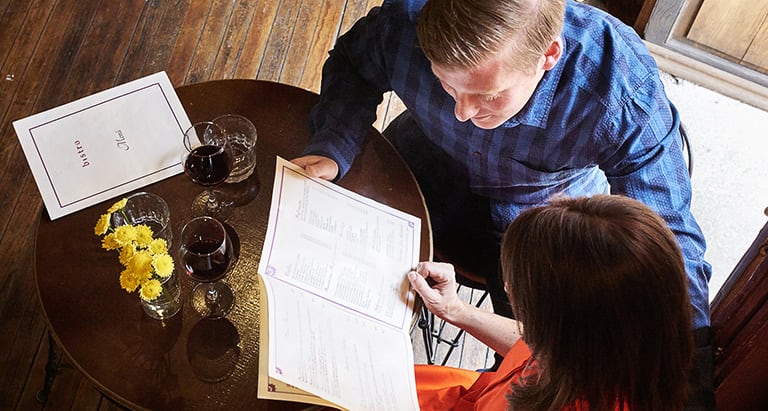 Use these insider tips to be a finer — and wiser — diner.
By Duane Swierczynski

If you eat in a restaurant 4.2 times a week you are officially an average American. Unfortunately, the typical American is also overweight. Part of the reason is that restaurant portions tend to be oversized, and it's hard to monitor the ingredients and means of preparation, which often means high fat and calories. Armed with the following info, however, you can stay in control of what you eat — even when you're out.

Avoid unlucky number 7
Open the menu, and trace a large, imaginary "7" with your finger from edge to edge. Research shows that the average customer's eyes follow this path first upon opening a menu, says Brian Wansink, PhD, director of the Cornell University Food and Brand Lab in Ithaca, New York and author of Mindless Eating: Why We Eat More Than We Think. You'll usually find the items that yield the highest profit (food cost vs. menu price) along the 7 line. The better values will tend to be nearer the left-middle and lower-right corners of the men

Hold the butter
Must raid the bread basket? Use olive oil, not butter. A University of Illinois study of 340 patrons in an Italian restaurant found that those diners who dipped their bread in olive oil ate an average 23 percent less bread than the butter users, and reported feeling full sooner. They escaped the bread basket with 50 fewer calories overall; olive-oil users ate an average of 264 calories in bread and oil, while butter spreaders consumed 319.

Start the right way
Stick with a classic appetizer: get the shrimp cocktail and save SmartPoints™ values.

Nix the prix fixe
Ordering the three-course prix-fixe is just a fancy way of super-sizing your meal, says Bonnie Taub-Dix, a nutritionist in New York and spokesperson for the American Dietetic Association. The automatic addition of an appetizer and dessert adds SmartPoints™  values and is harder to resist—after all, you've paid for them.

Keep greens lean
Salads are good-for-you choices, but sometimes the wrong dressing choice can multiply the SmartPoints™ value. When possible, order salad dressings and sauces on the side. Dip your fork in, instead of pouring it on, and you'll consume far less without noticing much of a difference in flavor. Here are some things you need to know about popular salad choices:

Cobb salad: It tastes great because it's loaded with bacon, dressing, egg yolks and blue cheese. You might as well go for the steak.

Caesar salad: Expect to find plenty of SmartPoints™ values in just a quarter cup of the caesar dressing alone — before the croutons or any other special extras. If the restaurant offers a low-fat caesar dressing on the side, order that with a plain salad, which will likely contain more vegetables.

Chef's salad: There could be 1,000 calories in that festive bowl of cold cuts, says Taub-Dix. Depending on the types and quantity of meats and cheeses the restaurant uses, it could vary from 2 SmartPoints™ values per cup to five times that with dressing.

Crispy-topped salads: Adding Asian crispy noodles or crunchy croutons to your salad? They can add a ton of SmartPoints™ values to your meal.

Ace the Main Event
Redefine surf and turf
Steamed fish and grilled chicken breast are the champs of sea and land. But be careful: "'Grilled' can mean it was 'grilled' in a frying pan with oil," says Taub-Dix. Ask for it "grilled dry."

Roasted chicken surprise
"Very often I have seen chefs lift the skin and put butter or oil under it," says Taub-Dix. Chefs also put butter on steak to give it glaze. Ask them to refrain when you order.

Halve it your way
Cut your entrée in half as soon as it arrives and put it aside in a doggy bag. What's left on your plate will probably still be larger than a "standard" portion size.

Have your just desserts
If you and your loved one traditionally like to close a restaurant meal with a shared dessert for the table, go for the sorbet.