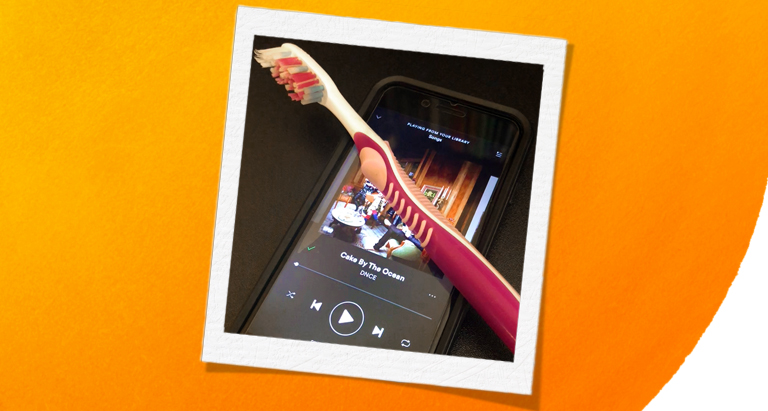 I’ve been making a real effort to get more movement and steps in. There are old standbys: parking (or in my case getting off the bus) further away so you can walk more, taking the stairs instead of the elevator, and so on. However, I’ve been finding there are a lot of little things that you can do (even when you’re stuck in the house) that don’t take much effort but really help rack up those steps!

Cooking countdown: I was cooking some veggies in the microwave. I had four minutes until they were done. Normally, I go back to the couch and sit down. Not anymore—now I make the most of those minutes. I pick up stuff around the apartment, I clean the counters, gather up the garbage, and look for little odds and ends of chores that I often put off. Later, while I was making something on the stovetop, instead of standing still, I walked in place while I was cooking. I figured if I had to stand there anyway, I may as well get some movement in!

Movie (or TV) march: I find myself putting on the TV and watching my favorite shows and movies all the time. That’s a lot of time spent sitting on my butt doing nothing. So now I’ve been making myself get up and march in place, do a two-step, a little punching, kicking, anything to get in some movement.

Line dancing: The grocery store had a huge line. I was standing there waiting for what seemed like forever. I still had a long way to go until I hit my step goal, so I decided to get some steps in right then and there. I moved back and forth as I waited in line. I realize I may have looked like a child who had to go to the bathroom or just a real fidgety adult—but who cared! I was getting steps in! Bonus—I had been frustrated standing in line (knowing I had so much to do and not enough time), but this made me feel like at least I was getting a little movement in! (This line dancing also works when you’re walking and get stuck waiting for a light to change!)

Bedtime bustle: I put some music on as I was getting ready for bed and realized I was wasting some valuable movement time. Why not dance around while I brush my teeth, get my pajamas, or on the rare occasion wait for a facemask to dry? So I gave it a try! It was fun, put me in a good mood, and upped my number of steps for the day.

Dance party: The bedtime bustle also works when you’re getting up in the morning—or really any time you’re looking for an energy boost. It’s a feel-good way that also helps you get in some steps. The other day, I realized I hadn’t made much of a dent in my movement goal, so I put on some music and danced around my apartment (my own private little Zumba class). I started off with Cake by the Ocean by DNCE (about 3½ minutes) and it was so much fun that I kept going! It didn’t feel like exercise, it was just fun, but it got me moving and put a smile on my face.

What are some different ways you like to get steps in? You can find me on Connect @shani!