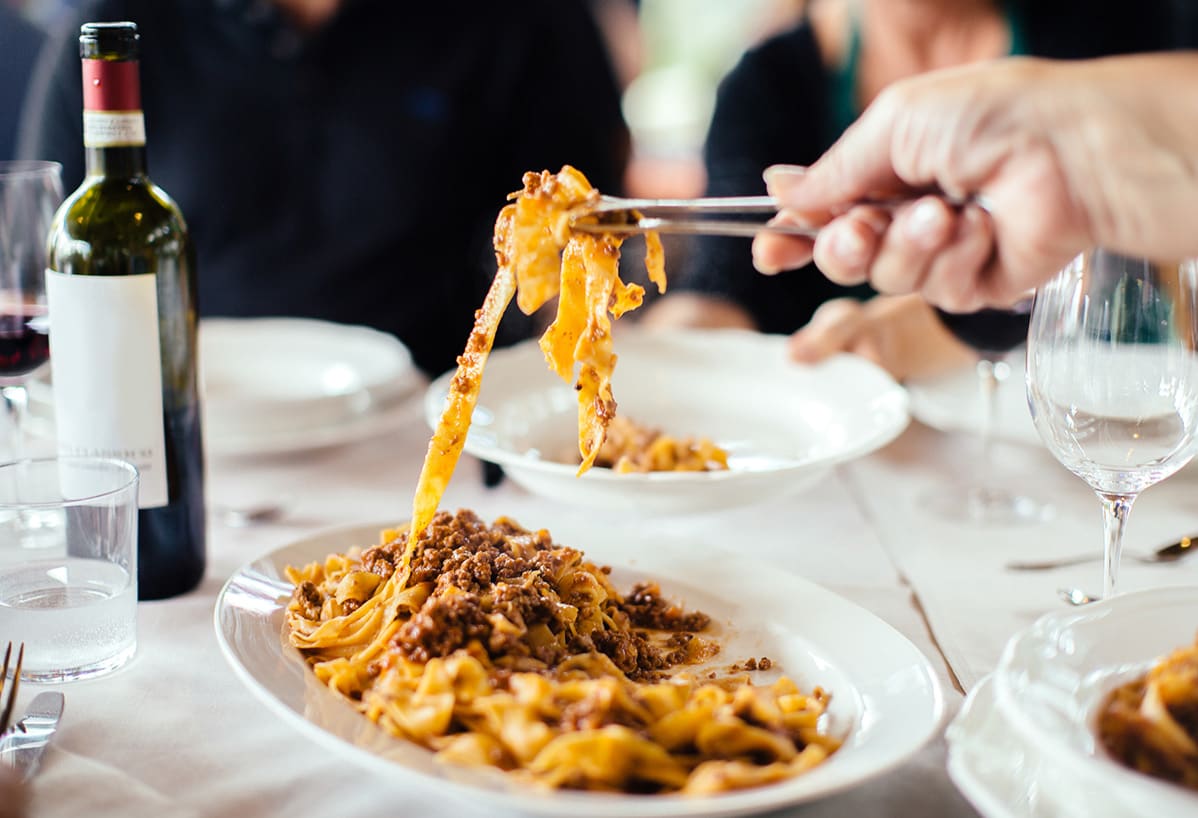 Let’s go out for … Italian

Whether you’re at the local pizza parlor or a white-napkin establishment with a famous chef, here’s how to mangia bene.

There’s a good reason why Italian staples like spaghetti, lasagna and pizza have become naturalized citizens at the American table. “I think of Italian food as happy food — accessible, with tons of flavor, but it doesn’t take itself too seriously,” says Amy Brandwein, executive chef of Casa Nonna restaurants in Washington DC and New York.

That partly explains why Italian restaurants are the most popular ethnic restaurants in the United States. Repeatedly indulging in restaurant portions of some of the most delicious food in the world, however, can wreak havoc on your weight-loss goals.

But don't mourn your meatballs just yet: If you’re armed with the right info you can enjoy meals at Italian restaurants. Authentic Italian cuisine can be a healthy choice, with fresh ingredients typical of the Mediterranean diet, according to Melissa Joy Dobbins, RD, spokesperson for the Academy of Nutrition and Dietetics and instructor at Kendall College Culinary School in Chicago. “The problem comes with the Americanized Italian dishes and the tendency toward outrageous portions.”

Venture into almost any Italian restaurant in this country and you’ll see plenty of extras that you won’t find on most family tables in Naples or Florence. Like a bottomless bread basket, for starters. And a mountain of cheese-smothered pasta with meat set in front of a single person, rather than at the center of a table of six. If you want to enjoy the healthiest, most pleasurable meal at an Italian restaurant, eat like an Italian. From antipasto to dessert, these tips will help.

Have your pane with protein
The best decision is to leave the bread basket off the table. However, if that would risk starting a riot, at least eat it with some antipasto. “Have bread with a small bite of cheese, or charcuterie, which offers more satisfaction and won’t send you reaching for another slice,” says Dobbins. Watch out for the focaccia: A single piece can total 4 SmartPoints values, twice the amount in a normal piece of white bread.

Use oil, not butter
Not only is olive oil a source of healthful monounsaturated fat, but a Cornell University study found that diners who used olive oil as a bread condiment ate 23 percent less bread than those who used butter. Just don’t soak the bread entirely; one dip is enough.

Don’t O.D. on lunchmeat
A common meat antipasto is misto salumi, or Italian charcuterie that includes dried meats like the familiar prosciutto, as well as speck, mortadella and bresaola. While these meats are high in fat and protein, with about 70 to 90 calories per ounce, they usually come in very thin slices. “A thin slice can be satisfying because it’s intense in flavor, but the key is to not make a sandwich with it,” says Dobbins.

Consider going tapas
The small plates that precede pasta are known as “antipasti,” and they run the gamut from healthy choices like marinated vegetables, olives and artichokes to heart-stoppers like fried squash blossoms stuffed with cheese. “It’s perfectly fine to make a tasting meal of antipasti,” says Brandwein. “The beauty is, you can pick one indulgence, like risotto balls, and balance it with a number of healthier selections.”

Don’t overlook soup
Soup is a main course in authentic Italian restaurants but you can also order it as an appetizer. Traditional Tuscan and Florentine soups, with combinations of escarole, beans, pasta and sausage, can be good alternatives to meat antipasti or salads filled with cheese.

Combine courses
In traditional Italian dining, the second course, or secondo, is usually a simple piece of meat, with contorni, or side dishes, ordered separately. If it’s an option, pay the premium to add chicken or shrimp to your pasta and skip this course. “It’s counterintuitive, because you’re adding something. But you’ll eat less food overall with one course. And that single plate will be more filling and satisfying than pasta alone,” says Dobbins.

Go halves on pasta
Pasta,,in its many shapes and sizes, is the heart of the Italian dining experience. Often, it’s not the pasta itself, but the portion that is most destructive to a healthy diet. “I frequently order a half portion of pasta,” says Brandwein. You can also order two different half portions, and split the difference between a splurge and a healthier choice. It’s harder to do this with lasagna, but you can ask the server to cut it in half and serve it on two plates for sharing (a 1-cup serving will run 8 to 15 SmartPoints values, depending on its ingredients and density).

Fill your plate with air
A hollow pasta, like ziti, orecchiette, bucatini, etc., will appear to give you a larger portion size than solid pasta, like spaghetti or fettuccine. And that may help you eat less of it while still feeling satisfied. The opposite is true of risotto, by the way. “White pasta and white rice are nutritionally similar, but rice is much denser,” says Dobbins. “So you’re likely to eat a larger portion of risotto than of a lighter, hollow pasta.”

Go whole-wheat — if you really like it
A cup of whole-wheat spaghetti will shave 1 SmartPoints value off regular spaghetti’s 6 SmartPoints values — but it may not be worth it if you don’t enjoy it. While whole-wheat is undoubtedly a better nutritional choice than white pasta, it can also be chewy unless expertly prepared. “As long as you’re getting your whole grains somewhere, there is not much to gain nutritionally from one meal of whole-wheat pasta,” says Dobbins. “It might pay to order what you enjoy, and get your grains elsewhere.”

Know beans
Beans are traditionally used in Italian cuisine, notably giant favas, cannellini and borlotti. Pasta e fagioli (pasta with beans) is a smart choice for the first course, since beans replace a portion of the pasta, bringing fiber and protein to this traditional dish. The dish comes in many regional variations, sometimes appearing more like a soup.

Be stingy with the cheese
An ounce of Parmesan cheese adds 4 SmartPoints values. If you want some, ask the waiter to grind a bit onto your pasta — or sprinkle it on yourself and then get that cheese off your table. Otherwise, you’ll be tempted to keep spooning on more cheese throughout your meal. And don’t add Parmesan to pasta stuffed with formaggio. “You’ve already got your cheese in the pasta,” says Dobbins.

Another tip: Italians don't add cheese to a pasta dish that has fish in it, including shrimp or clams. So try it their way.

Understand gluten-free pasta
You’ll see this on more menus now, but don’t think that gluten-free pasta is healthier or lower in calories than white or whole-wheat pasta. Gluten-free foods were developed for people who have gluten intolerance (or Celiac Disease) and exclude wheat, barley, oats and rye. Unless you can’t tolerate gluten, there’s no benefit to ordering this pasta.

There are hundreds of varieties of pasta sauces, but they all really break down into a few main categories. Two rules: First, always ask for the sauce on the side to control the portion. Second, sauces usually get a helping of butter or cream right before they’re served, so ask the waiter to forego this step. Otherwise, you’re stuck with the house preparation. “People often try to alter the sauce when ordering, but these sauces are already constructed and ready to go,” says Brandwein. “You can’t just leave out pancetta or cream.”

Tomato/marinara
About 3 SmartPoints values per half cup
Simple tomato sauce (known as salsa al pomodoro in southern Italy, or marinara in the United States) is usually the best choice. “This is one of the rare cases where cooked is even better than fresh,” says Dobbins. “Tomato sauce actually concentrates the nutrition of fresh tomatoes, loaded with vitamins A and C and lycopene.” Adding meat (making it a Bolognese), fish or cheese can double the SmartPoints values.

Vodka sauce
About 5 SmartPoints values per half cup
This is really just marinara sauce with heavy cream, butter and vodka, but people think of it as its own variety.

Alfredo
About 14 SmartPoints values per half cup
Made with heavy cream, butter and Parmesan cheese, the nefarious Alfredo sauce is your worst choice — even though pesto and oil pack more calories per teaspoon. Why? Because you’ll use a lot more Alfredo sauce than you will pesto or olive oil. The chef might pour more than 2 cups of sauce on your fettuccine. If you love Alfredo sauce, try to balance the fat by choosing a dish with vegetables or protein, like pasta primavera with chicken, suggests Dobbins.

Pesto sauce
About 19 SmartPoints values per half cup
This Northern Italian sauce is made with olive oil, pine nuts, garlic, basil and Parmesan cheese. While it can be highly fattening, the strong flavor will let you use much less of it than you would marinara sauce. You might drizzle 4 tablespoons (for 9 SmartPoints values) on a dish of pasta.

Al Dente: It literally means “to the teeth,” but this term means you want your pasta firm in the center (not overcooked). “There’s no need to ask for this — you can assume it will be cooked this way in a quality Italian restaurant,” says Brandwein.

Carbonara: A hearty meal of pasta in bacon or pork fat, with eggs and cheese. It can pack 16 SmartPoints values per cup.

Gnocchi: These Italian dumplings are made with potato or, sometimes, cheese. One cup of potato gnocchi has 7 SmartPoints values per cup; cheese kicks it up to 17.

Mozzarella di bufala — Cheese made from the milk of domestic water buffalo is higher in protein, fat and minerals than cow’s milk mozzarella, and has about 4 SmartPoints values per ounce.

Polenta: A creamy porridge made of ground cornmeal. "Be aware it may be loaded with cheese or cream," says Dobbins. Plain Polenta has about 7 SmartPoints values per cup.

Zabaglione: An egg, liquor and sugar sauce that often dresses desserts or fruit. It packs about 7 SmartPoints values per half cup. .