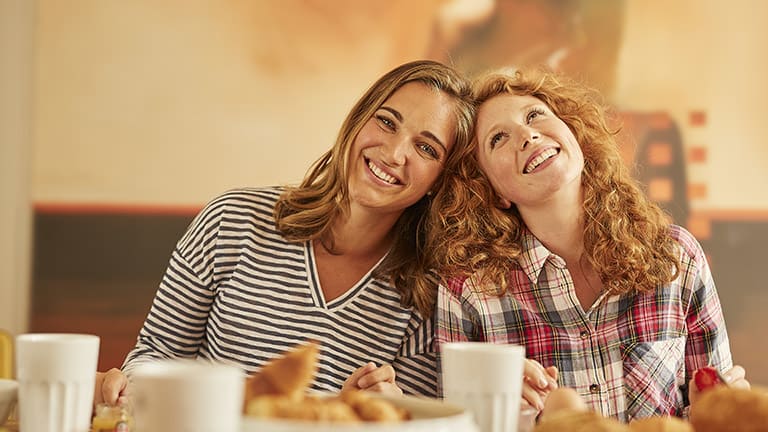 Do you gain weight on your period? If so, you're not alone. We explain why your scales may read a little differently during your time of the month.

The feeling that your period may cause weight gain isn’t all in your head.

In fact, there are several physiological and psychological reasons why menstruation adds pounds that may last longer than the week of your period. The good news? With some knowledge of the why and how, you don’t need to grin and bear it. Here’s what you need to know:


Feeling bloated is a common complaint during the menstrual cycle, when elevated levels of female reproductive hormones oestrogen and progesterone lead to a shift in the body’s set point for sodium and cause fluid retention. Specifically, the part of your menstrual cycle you can 'bloat-blame' is the so-called luteal phase, which begins after ovulation and lasts for around two weeks. At the beginning of this phase (when the uterus lining prepares for a possible pregnancy), oestrogen drops, then rises, then remains high. Progesterone levels also run high.

This hormonal upheaval can cause problems with the digestive tract. Oestrogen can cause water retention, leading to bloating, while progesterone results in delayed GI transit time. This means that food moves more slowly through the intestine, resulting in constipation and bloating. Then, when progesterone levels drop and bleeding begins, you might experience increased bowel activity, potentially leading to diarrhoea and...you guessed it, bloating!

To keep fluid retention at bay, avoid salty foods during the second half of your menstrual cycle. Skip the diuretics, says Amy Stephens, MD, a doctor of obstetrics and gynecology at the Cleveland Clinic. “In severe cases, some women may be prescribed them, but that should be something done in conjunction with your gynecologist,” she says.


Your period affects how well your gastrointestinal tract works to eliminate waste from your body. “Progesterone causes some relaxation of smooth muscle, leading to a reduction in gastrointestinal motility, which may lead to bloating and constipation in some women,” says Dr. Heather Huddleston MD, an Associate Professor in the Division of Reproductive Endocrinology and Infertility at the UCSF Center for Reproductive Health. To reduce both, increase the amount of fibre in your diet, particularly during the second half of your cycle, she suggests.


Progesterone plays another weighty role during the second half of the menstrual cycle, by increasing appetite.  How? Simply put, your body uses more calories leading up to and during your period. Burning more calories increases your basal metabolic rate (the rate at which the body uses energy while at rest), and as a result you feel hungry more often. The hormones at work during this time also make you crave comfort foods like chocolate and biscuits - which are exactly the things you should steer clear, according to Dr. Stephens. “Unfortunately, you want to avoid things you really crave, like sugary foods and carbs,” she says. “You want to avoid caffeine and alcohol, and really salty foods.”

Your body burns an extra 100-300 calories for a few days before and/or during your period, so the trick is not to overindulge and sabotage your healthy eating plan during your time of the month. “Consistent overeating that is not offset by an increase in physical activity can lead to permanent weight gain,” says Dr. Huddleston.


For most women, their monthly “cycle” starts with at least one of the host of symptoms known as premenstrual syndrome, or PMS, about one or two weeks before their actual period begins. Bloating, food cravings, and weight gain are among the most common symptoms. A study of 259 healthy women with regular menstrual cycles showed significant increases in appetite, protein intake, and total cravings, including those for chocolate, sweets, and salty flavors during the luteal, or premenstrual, phase before menstruation begins.

Experiencing depression or anxiety are also hallmarks of PMS, which is thought to be caused by cyclic changes in the brain chemical serotonin. “For some women, these mood symptoms can also lead to increased food intake,” says Dr. Huddleston. About 3 to 8 percent of women may experience a severe form of PMS known as premenstrual dysphoric disorder (PMDD), according to the American College of Obstetricians and Gynecologists. Food cravings or binge eating are one of the symptoms of PMDD. See a health professional if you experience significant depression or anxiety during PMS, says Dr. Huddleston, as they can be associated with binge eating or eating disordered behaviors. To offset the weight gain during PMS or the second half of your cycle, increase exercise and focus on consuming healthy, nutrient-rich foods.


If you experience irregular periods and weight gain, there may be cause for concern. Polycystic Ovary Syndrome, or PCOS, is an imbalance of reproductive hormones that causes metabolism problems. It affects one in 10 women of child bearing age.

In obese women with PCOS, losing weight may help regulate their menstrual cycles. “Fat itself can produce oestrogen which can cause hormonal imbalances that can affect the cycle,” says Dr. Stephens. “Irregular cycles do not cause weight gain. Weight gain can cause irregular cycles.”

For most women, weight gain during menstruation is only temporary. Maintaining an overall healthy lifestyle and diet will keep those extra fluctuating pounds from becoming permanent.

For SmartPoints®-friendly recipes, weight loss & wellbeing tips and more
Sign me up!

Worried about weight gain during lockdown?

What happens at a Virtual Workshop?

12 healthy snacks to enjoy when you're working from home

A dozen things to do with tinned tomatoes

WW supports your wellbeing every day.