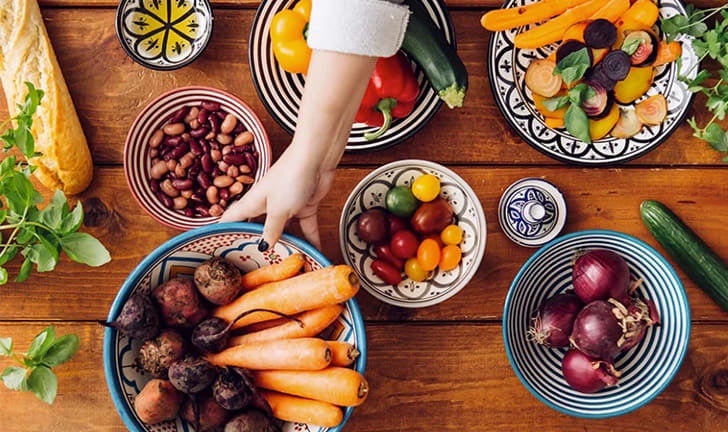 Your Complete Guide to Going Vegetarian

hinking about quitting meat? Here’s what you need to know about starting a vegetarian diet, including potential health benefits, the science on weight loss, and 20 plant-based recipes to try this week.
Joanne Van Zuidam

Buh-bye, burgers. Sayonara, sausages. With retail sales of plant-based foods on the rise, meat has gone from juicy star of the dinner plate to something more and more people are cutting out. Health reasons, environmental concerns, compassion for animals, religious beliefs, and plain ol’ culinary preference are just some of the reasons people have been veering vegetarian lately. In a nutshell? Plants are in popular demand.

But it’s one thing to move meat to the sidelines; it’s another to figure out exactly what a vegetarian diet looks like day to day. Can you still have seafood? What about eggs? Where do you get your protein? The good news: The answers are pretty much up to you. Read on to explore some of the most popular approaches to vegetarian eating and learn how to incorporate more meatless meals into your rotation.

What exactly is a vegetarian diet?

Ask a group of vegetarians to define the way they eat, and you’ll quickly realize the answer is highly personal. In broad terms, a vegetarian diet nixes or limits meat in favour of plant-based foods. Under that huge umbrella, vegetarian diets can range from still including meat every now and then to eliminating every single food made with an animal-derived product (even, say, some forms of white sugar, which are processed using bone char). Vegetarian diets tend to fall into one of four categories, explains Amy Gorin, MS, RDN, a plant-based registered dietitian and owner of Plant-Based Eats:

Foods to include in a vegetarian diet

In the grand scheme of things, going vegetarian doesn’t mean a lack of variety. But it can definitely feel that way if you’re switching from serious carnivore status. No bacon or fried chicken? What are you supposed to eat for protein when you can’t just throw a steak on your plate? And how do you do all this without getting bored? A person can enjoy only so many salads, after all.

Try it, though, and you may find it’s pretty simple to keep your taste buds tingling without touching meat. The whole world of fruits, veggies, grains, beans, nuts, and (for some people) dairy is open to you. Here’s a sampling of things you can nosh on:

Legumes, beans, and pulses: Things like lentils, black beans, chickpeas, cannellini beans, peas, butter beans, and more are worth including in your meals as often as you can. “They are high in fibre, low in fat, rich in many essential nutrients including protein, B vitamins, folate, iron, potassium, phosphorus, and zinc—and they are filling,” says Martica Heaner, PhD, an adjunct associate professor of nutrition at Hunter College in New York City.

Vegetables: There’s a reason veggies have a strong reputation for being healthy: They’re full of nutrients like calcium, iron, protein, fibre, and vitamins A, C, E, and K. Branch out of your typical vegetable rotation with some of these options:

Health benefits of a vegetarian diet

Would breaking up with your butcher be better for your body? It’s possible. Research shows plant-based diets are linked to a lower risk for heart disease, diabetes, and even some cancers, while other research shows diets high in red and processed meats may increase a person’s risk of diseases like type 2 diabetes and cardiovascular disease. Here's a deeper dive into the science:

But here’s the thing: To make the most meaningful impact on your health, you can’t just focus on avoiding certain foods; you need to fill your plate with options that are nutrient-dense, Gorin says. And that’s true whether you go vegetarian or not. Other eating approaches, including the DASH diet and Mediterranean diet, don’t exclude meat completely; they support health by encouraging people to eat a variety of plants and choose leaner choices of protein, like fish and poultry.

Can a vegetarian diet help you lose weight?

A singular goal of dropping pounds might not be the best reason to go meatless—there’s not enough evidence that switching to a vegetarian diet provides a weight-loss advantage over other eating patterns. Avoiding meat doesn’t necessarily mean you’ll consume fewer calories than you burn, which is what needs to happen to lose weight, Gorin says. Some observational studies do show vegetarians generally have lower body weight compared to nonvegetarians, but more conclusive research is needed before this way of eating gets touted as a surefire pathway to a smaller pant size.

What about belly fat?

By the same token, no single diet is proven to zap belly fat, either, so don’t think of banning meat as a magic way to whittle your middle. Some evidence does suggest that limiting higher-fat meats might be helpful: A study of nearly 24,000 adults published in The Journal of Nutrition found that those who ate a diet high in lean protein—like fish, poultry, and beans—had both lower BMIs and smaller waist measurements. Additional ways to reduce belly fat include getting regular physical activity, prioritizing sleep, and managing stress.

Does WW have a vegetarian diet?

While there is no specific vegetarian plan (with WW, everything is on the menu!), the program affords you full freedom in choosing which foods to eat—and which foods you’d rather not. In fact, because so many of WW’s ZeroPoint™ foods are plant-based, you may find yourself naturally gravitating toward non-meat options throughout the day. From there, it’s simple to use your Budget on vegetarian choices like nuts, seeds, whole grains, and more.

Potential downsides of a vegetarian diet

While animal-based foods definitely aren’t a requirement for a healthy diet, some key nutrients do tend to be more abundant in meat or dairy, Heaner says. It’s all good—you just need to pay a little extra attention to getting the following from other sources.

One other thing to know about going vegetarian is that you may end up eating a lot more fibre, which could make you feel a bit bloated or gassy during the early days. Heaner says that such effects generally go away once the body gets used to all that roughage.

Ready to dig in? Here are five days’ worth of meatless recipes to get you going. While some include animal products like eggs and cheese, other dishes are purely plant-based. Each day includes a recipe for breakfast, lunch, dinner, and a snack.

The upshot: Should you try a vegetarian diet?

Whether you're ready to quit meat cold turkey or want to dial back your intake, go for it! The health benefits that come from a varied, plant-forward diet, like lower risk for heart disease and other serious conditions, make it a smart choice for many people. That said, don’t feel pressured to ban chicken tenders from your life if you enjoy eating them sometimes. Beyond hitting nutrition benchmarks, a truly healthy diet is one that reflects your personal preferences.

Joanne Van Zuidam is a health journalist and editor based in New Jersey.

This article was reviewed for accuracy in July 2021 by Angela Goscilo, MS, RD, CDN, manager of nutrition at WW. The WW Science Team is a dedicated group of experts who ensure all our solutions are rooted in the best possible research.