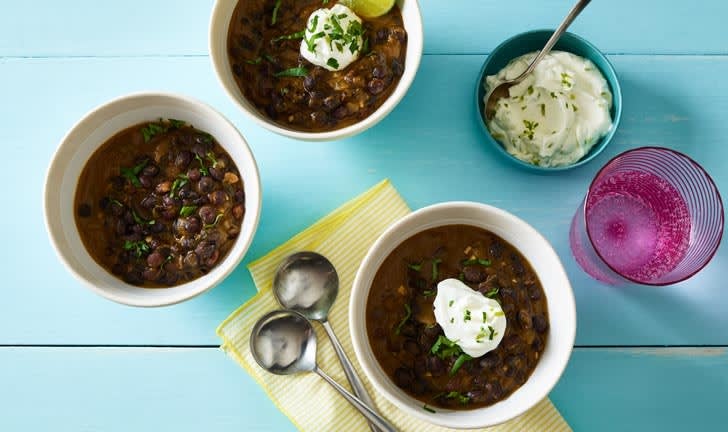 Everything you need to know about beans

An important dietary staple in cuisines all over the globe, the humble bean is as nutritious as it is delicious and versatile. A ZeroPoint food for those on the Blue or Purple plan (and a low SmartPoints item if you’re on Green), this article breaks down the importance of including beans in a healthy diet, the pros and cons of canned versus dried beans as well as some our favourite recipes featuring beans as the central ingredient.

Fibre: Beans are an excellent source of soluble and insoluble fibre, both of which promote gut health and regularity. The consumption of soluble fibre has been linked to lower LDL cholesterol levels and a decrease in high blood pressure, while insoluble fibre has been shown to lower the risk of colon cancer and other gastrointestinal illnesses. If beans are new to your diet, begin with small amounts and work your way up; the sudden addition of extra fibre can potentially cause gas or an upset stomach.

Folate: Beans are a good source of folate, also known as vitamin B9, which is used by the body to produce DNA and RNA, to turn carbohydrates into energy and to make healthy red blood cells.

Iron: Beans are a plant-based source of iron, which makes them a particularly valuable addition to any vegetarian or vegan eating plan. In addition to iron, beans also contain an antioxidant called phylate which, although nutritionally beneficial, can result in less than optimal iron absorption. To fix this, enjoy beans with foods that contain vitamin C such as spinach, broccoli, sweet peppers, citrus and tomato sauce.

The scoop on beans and protein

Beans are a fat-free, cholesterol-free, plant-based source of protein. With the exception of soybeans, which contain all nine essential amino acids, beans are considered an incomplete protein. Up until fairly recently, dietitians have recommended “combining” incomplete proteins in a single meal to form complete proteins (classic examples include beans and rice or beans and cheese.) Current research shows that combining incomplete sources of protein is unnecessary as long as a variety of protein-containing foods are eaten over the course of the day.

When it comes down to sheer convenience, there’s no beating canned beans. Always rinse canned beans before using to partially remove excess sodium. Choose “no salt added” canned beans (still giving them a rinse) if you’re watching your sodium intake.

Dried beans require more effort, but often taste better as well as being a more economical choice. Soaking the dried beans in cool water overnight shortens the cooking time considerably and produces a creamier end result. If you’re short on time, you can also try the quick soak method which involves pouring boiling water over the dried beans (a large pot or heat-proof bowl works well) and letting them soak for an hour. To cook dried beans, cover them with fresh water by a couple of inches and bring the contents to a boil before reducing the heat and letting the beans cook for the specified time. A pressure cooker makes fast work of cooking dried beans, just be sure to factor in the time needed to build and expel steam.

Sometimes you might find that dried beans refuse to soften no matter how long they’ve been soaked or simmered. Here are some of the most likely culprits, as well as tips for troubleshooting them: