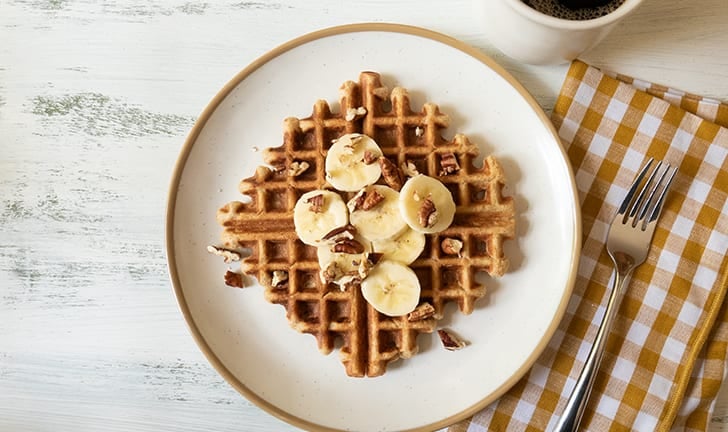 Everything you’ve ever wanted to know about waffles (plus 16 mouth-watering recipes!)
Ashley Linkletter

Looking to celebrate National Waffle Day in style? The new WW by Dash Mini Waffle Maker has all your waffle-making needs covered: it makes the perfect single serving waffle, the non-stick surface makes it easy to clean, and its compact size takes up less storage space.

Fast facts about the history of waffles

Belgian waffle: Despite the name, these crispy-on-the-outside, fluffy-on-the-inside waffles are actually an American invention. Belgian waffle recipes tend to use baking powder as a leavener, instead of traditional yeast.

Brussels waffle: These waffles share taste, texture, and appearance with Belgian waffles, but are made with yeast as a leavener. Both Brussels and Belgian waffles are delicious when served with fresh fruit and powdered sugar.

American waffles: American-style waffles are similar to Belgian waffles, but tend to use baking powder as a leavener, resulting in thinner waffles with small holes. This type of waffle is often served with savoury toppings (such as chicken and gravy), but is also well-suited to sweet toppings.

Toaster waffles: Toaster waffles are usually commercially prepared, from the frozen food aisle. Toaster waffles can be topped with a wide variety of sweet and savoury ingredients, making them a handy convenience item to keep in the freezer. Look for whole grain, plain versions and top with your favourite healthy sides.

Liege waffles: A dessert waffle if there ever was one, Liege waffles are sweet and dense, with chunks of granulated sugar incorporated into the batter.

Tips for making waffles at home

Waffles on the sweeter side

If you like to start the day with something sweet, these waffle recipes are a great place to begin. For recipes using bananas in the batter, unless otherwise indicated, use overripe, soft fruit — the same kind used for making banana bread. The fruit-based toppings can be altered to suit what’s seasonally available, simply sub in the same amounts with the fruit of your choice.

Waffles with lemony ricotta and blueberries

Waffles with a savoury kick

When you have a carton of eggs and frozen waffles in the freezer you’re never more than 10 minutes away from a satisfying meal. In addition to the suggestions below, try topping savoury waffles with unexpected sources of protein such as crispy tofu, oven roasted chicken, halloumi (or any other grilling cheese), pulled pork, or hummus. Condiments such as hot sauce, soy sauce, salsa, and kimchi add plenty of flavour without extra effort.

Make a satisfying meal with these savoury waffle recipes: