All about iron and why we need it in our diet

Are you eating enough of this essential mineral? Here’s all you need to know.

Why we need iron in our diet

Tired all the time? Feeling low on energy? Can’t concentrate? There are many factors that can contribute (#life!), but one reason could be your iron level. Before you start self-diagnosing with ‘Dr Google’ or dosing up on iron supplements, it’s important to get your facts straight about this mineral. “Iron is an essential dietary mineral needed for a lot of basic bodily functions,” says WW dietitian Nicole Stride. We need it for a healthy immune system, transporting oxygen around the body and helping in the production of red blood cells.

12% of pregnant women and 15% of non-pregnant women of reproductive age have anaemia, with iron deficiency a major cause, according to the Medical Journal of Australia. “If you think you may be low in iron it’s best to see your doctor and request a blood test to check your iron levels that way you’ll know for sure and can develop a treatment plan with your Doctor,” says Stride.

The benefits of iron

“While our bodies are good at storing iron – mostly in the form of haemoglobin (a blood protein) – we can’t make iron, so we have to get all of our daily requirements through the foods we eat,” says Stride.

Iron-rich foods includes red meat, fish, poultry and wholegrain or fortified cereals (see boxes for top sources), so a well-balanced diet that includes animal products should usually give you what you need. However, it’s important to note that you’ll only absorb some of the iron you eat. “There are two types of iron – haem iron from animal sources and non-haem iron from plant sources,” says Stride. “Heam iron is more readily absorbed than non-haem iron, with around 25 per cent of the iron from animal sources being absorbed compared to only two and eight per cent from plant sources,” she says. So you can see how vegetarians and vegans need to plan their food choices more carefully to meet their iron requirements, which is 18mg a day for women aged 19 to 50 with an additional 9mg a day required during pregnancy.

“What you eat alongside iron-rich foods can also affect its absorption,” says Stride. “Foods containing caffeine, tannins (in wine and tea), fibre and dietary calcium can inhibit iron absorption, so try to limit drinking coffee, tea or wine with meals, particularly if you have low iron levels.” The rate we absorb nutrients in food can vary, but on average, leave around 30-60 minutes before you drink a coffee or wine if you’re trying to boost your iron intake. “It’s a good idea to see your doctor if you’re taking any medication or herbal supplements as they might interfere with your iron absorption too,” says Stride.

Vitamin C is the magic partner to pump up your iron absorption. It boosts your body’s ability to absorb non-haem iron, so loading your plate with foods such as capsicum, berries and Brussels sprouts is a good idea.

“To help you get enough of this essential mineral, opt for a cereal that’s fortified with iron; eat lean red meat such as beef or pork two to three times a week, and combine your meals with vitamin-C rich foods like kiwifruit or capsicum,” suggests Stride. 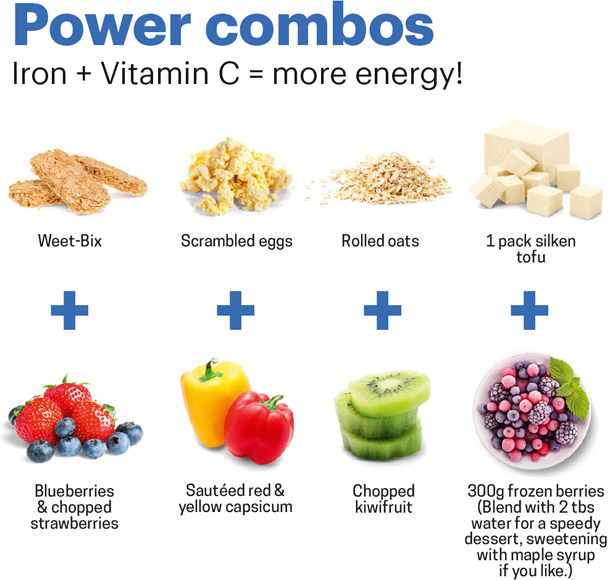 A lot of women are iron-deficient, most commonly in their late 40s, says general practitioner Dr Ginni Mansberg. “During peri-menopause, which lasts seven years on average, you can have extremely heavy periods, so iron deficiency is most common at that time,” she says. “Then in the early years of menopause, you may be playing catch-up.”

However, iron deficiency is usually caused by not consuming enough iron in your diet. “It can sometimes be due to fad diets where you cut out whole food groups or an inadequate vegetarian or vegan diet,” says Stride. Some health conditions, such as hypothyroidism or coeliac disease, can also result in a deficiency, as your body is less able to absorb iron.

Not surprisingly, when less oxygen reaches your tissues, your body struggles to find the energy it needs so the most common symptom of iron deficiency is tiredness. And that’s why it can be hard to know if you’re affected – after all, who doesn’t feel tired from time to time? But if your fatigue is coupled with headaches, feeling weak, irritable, unable to focus, or getting out of breath when you’re doing things that don’t usually bother you (like walking upstairs), it might be a good idea to visit your GP.

Do you need iron supplements?

If you think you might be low in iron, don’t head for the supplement aisle just yet – see your doctor first to have your ferritin (iron levels) checked. “Iron doesn't naturally wear out – you can’t lose it from your body unless you bleed it out, so it’s possible to overdose on it,” says Dr Mansberg. The upper limit for iron intake is 45mg a day for women and men. Above this, you risk toxicity. In extreme cases iron overload can damage internal organs and increase the risk of heart attacks, diabetes, and even some cancers, according to research. So resist the temptation to self-diagnose. “I wouldn't be taking an over-the-counter supplement without a blood test or regular monitoring by your doctor,” says Dr Mansberg. Another reason not to take supplements lightly: “Iron tablets are non-haem iron, which means they’re poorly absorbed by the gastrointestinal tract and tend to stay put, causing bloating and constipation,” she adds. “I’ve never met a woman who enjoys that.” Fair point.

The best way to ensure you've got enough iron is to eat iron-rich foods. Here are some of the best iron sources.