Sarah Russell-French feels fitter and more confident after losing more than 30kg with WW – despite a few hiccups along the way.

Sarah's journey to a healthier lifestyle

“You can develop lifelong practices for everyday life without feeling like you’re missing out.”

The kilos crept on while living in Kenya


Sarah Russell French had been living overseas for a year, working and playing hard. Returning home to Sydney, there were meals out to reconnect with friends. “When I was overseas, we ate out all the time. I lived in rural Kenya in a 10-bedroom share house, so there was lots of socialising and drinking and the weight just crept on,” says the 37-year-old agricultural scientist.

“Once home, I was catching up with friends I hadn’t seen in a year so I was going out a lot, and then renovating, so I had no kitchen for four months. At the end of all that, you sort of go, ‘Gee, how did that happen?’” The scales had crept up to 99kg, and when Sarah figured out why she didn’t like being in photos any more, she decided it was time for WW. “Moving home had made me realise how much weight I’d put on in the last 10 years,” she says.


Sarah had done the program previously when she was 20 and had 10kg to lose, so she knew it was a strategy that worked for her. “Having been successful on WW before, I knew I had to head back, as it is the best program to fit in with a hectic lifestyle while helping you adapt your habits to become sustainable,” she says. This time the challenge was greater, but 18 months later, Sarah had lost more than 30kg and reached Goal.

Overcoming a knee injury and plateau


Sarah encountered a hurdle along the way when she injured her knee and was put in an ankle-to-knee brace for two months to stabilise and rest the joint. “Hitting Goal was tough while being slowed down with the knee, but slowly I made it! I am now down to a smaller elasticised brace, which is much better,” Sarah says.

Another challenge was when her weight loss plateaued for a few months. Her WW Coaches helped her with fresh ideas on what to eat and cook and how to better track what she ate. “Plateauing is very hard,” Sarah says. “Once you start to plateau I find that you can allow foods to slip into your day and not be counted, which of course perpetuates the plateau.” Winning!

Less takeaway and a new approach to eating


A key part of Sarah’s success was her new approach to food. She was eating out less, reducing portion sizes, thinking about what she ate and cutting back on takeaway. “I am a lot more prepared with regards to food on a day-to-day basis,” she says. “I still go out and socialise a lot, but I think ahead and plan around activities. It’s simple and it works for me.

Accountability of weighing in each week


Another important aspect of the program was accountability. Facing up to the scales every week at the Monday morning WW Workshops she attends before work helped Sarah stay on track. “I find the WWWorkshops essential. It’s so important having a wonderful team that helps you ride through the hard periods, celebrate the positive periods and provide a constant support network,” she says. “I could not have done it without the WW weekly team!” A field hockey player, Sarah was already active with training and hockey games, running three times a week and doing Pilates. Now that she’s lost weight, she feels fitter, healthier and more self-confident. “I have always been quite active but I’m enjoying my sports more and more as I am faster, more confident and feel that I am making a better contribution to the team,” she says. 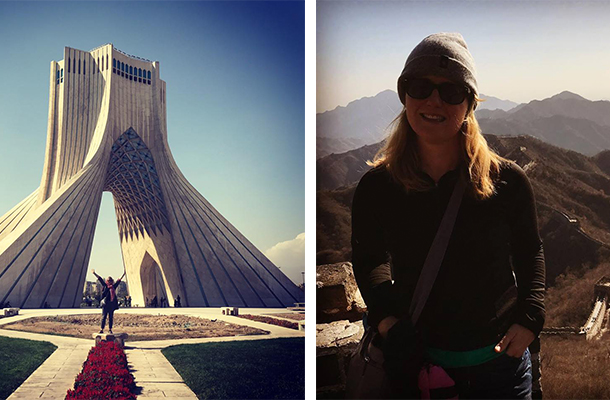 “I was traveling for six weeks and I lost two-and-a-bit kilos, so I think the habits are sticking now.”


Travel is still a huge part of Sarah’s life. In the last year she’s been to Kenya, Ethiopia and Japan for her work offering farming communities her agricultural expertise. A trip to Iran and Jordan was just for fun! “It’s taken me a year and a half to get here, and I’m finding my habits are very much ingrained now,” she says. “I was away for six weeks in Kenya, Ethiopia and Jordan, and I lost two-and-a-bit kilos and ate what I wanted, so I think the habits are sticking now. “I definitely feel more positive, and I’m feeling like myself again. I am a much happier, more confident person.”

1. I like the WW program as it includes a lot of the foods I am already eating – such as lentils, seafood and tofu – are ZeroPoint™ foods, which I find gives me more freedom.

2. Although I don’t eat meat, I’ve found there are plenty of ZeroPoint protein options.

3. It makes eating out and selecting positive choices a lot easier!