After several setbacks with her health goals over the years, Jacqueline Nadis is determined to create a new experience for herself and her young family.

Jacqueline's journey to a healthier lifestyle 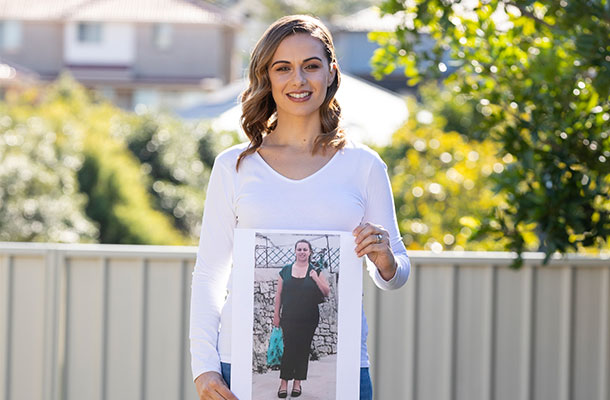 Go-to Mantra: Every day is a new opportunity to live your dream.

The motivation to succeed

If the difference between the possible and the impossible lies in a person’s determination, then Jacqueline Nadis is that person. Looking at her today, it’s hard to believe the 34-year-old mum of two beautiful boys has spent most of her life wishing she was invisible. But Jacqueline’s determination to turn her life around has seen her join WW four times in 14 years and use every setback to fuel her motivation to succeed.

Growing up as the 'big kid'

“I grew up being that ‘big’ kid,” says Jacqueline. “I can’t remember a time during my childhood when I didn’t feel embarrassed about my body.” Jacqueline’s parents are Italian, but she was born in Australia. “People always say Italian women are big, but my mum has always been tiny,” she says. “Even today she only weighs 54kg.” Jacqueline’s sisters Angie and Krystal are also petite. Her brother Michael has always been within a healthy weight range and so has her dad. Being the only one in the family who battled with weight was hard. “When Mum would take us shopping as kids, my sisters would head for the children’s wear or teens’ departments. They always looked gorgeous in their new outfits, but nothing from those departments fitted me. “From the age of 12 or 13, I had to shop in the women’s wear department. I’d look at myself in the mirror and think to myself, ‘I will never be pretty, and nobody will ever notice me or like me because of the way I look’.”

Dancing through the stigma

When Jacqueline was eight, she and her sisters started jazz ballet classes. “One time we had to wear a special costume. It was a little crop top and shorts, but my crop top needed to be much longer than everyone else’s so that it covered my big tummy,” Jacqueline says. “It was humiliating wearing it but back then I just thought it was my build. I believed I was born to be big and there was nothing I could ever do about it. It was just who I was, but it was a terrible way to be. The stigma, the teasing. It scarred me.”

Gaining control of her weight

The turning point came in 2004 when Jacqueline was 21 and weighed 103kg. “Mum kept telling me I needed to lose weight, but I was in a relationship at the time and I thought, ‘I’m okay, I’m fine.’ Then a few months later when that relationship turned sour, I was a mess.” To help Jacqueline get over the break-up, her sister Angie booked a surprise trip for two to Italy. “I was so unhappy at the time I could barely leave the house, but she bought the tickets just two weeks before we were due to leave so I couldn’t change my mind,” she says.

It was on that trip that Jacqueline first proved to herself that she had control over her weight. “That trip opened my eyes to what I had been missing out on,” she says. “I started to wonder why I was carrying all this weight. I felt like I was wasting my life.” While on holiday, the girls walked for hours every day. When they returned home, Jacqueline found she had lost 9kg in three weeks. Everyone commented on how well she looked, which inspired her.

“I kept up my daily walking, but I knew I needed to do more,” she says. “I had tried diets before, but they had only made things worse. I was either constantly hungry and couldn’t stick to the plan, or I would lose a few kilos only to pile them back on again once I stopped buying the special meals, which were also expensive.” It was then that a work colleague told Jacqueline about WW and she decided to join.

"Trust the program and keep your eyes on the prize." 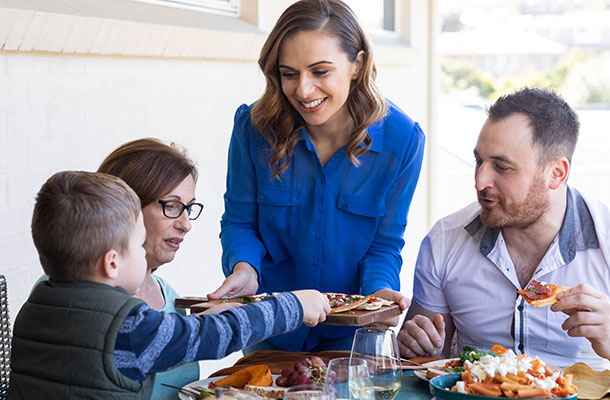 Unlike the diets Jacqueline had been on in the past, she found WW offered a complete change. All her favourite foods were allowed, and tracking made her feel in control and accountable. “Chips are my weakness,” she says. “But instead of never letting myself even look at them, I would save up my Points and have them occasionally, so I never felt deprived.”

“My usual breakfast before WW was cereal and milk, but I started having wholemeal toast with cottage cheese and tomato, which kept me feeling full all morning. Instead of a takeaway lunch, I’d have chicken salad with lots of vegies or salad greens. Dinner was vegies with a protein like salmon or lean lamb. For snacks, I swapped my muesli bars for carrot sticks with hummus and fresh fruit.”

In two years, Jacqueline lost 39kg and reached her goal weight. “I felt so amazing when I lost the weight. My sisters told me I looked beautiful and Mum was so proud of me. I’d spent all those years feeling self-conscious and sad. It was like I had been given my life back.” 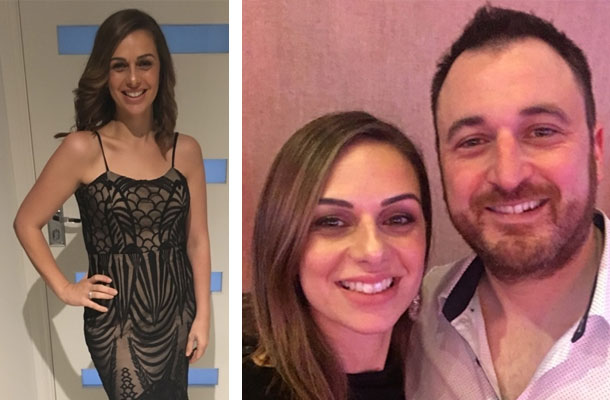 Breaking old habits proved harder than she thought once Jacqueline stopped going to WW Workshops. She also moved out of home and found that preparing meals ahead was difficult. Gradually, the weight crept up again. “I had gained 7kg since leaving home, but I knew WW worked, so I went back on the program and reached my goal weight for a second time in just six months,” she said. “It really is about having the right mindset. You can wake up every day and tell yourself you’re going to eat healthy today, but if you’re not in the right mindset it won’t happen.”

In 2009, Jacqueline met Jonathan, 35, and the couple married a year later. “I’ll never forget the day Mum and Angie came with me to try on wedding dresses,” she says. “The lady in the bridal shop asked me what style of dress I was looking for. When I said I wasn’t sure, she answered, ‘Oh, but you’re so tiny you will look amazing in anything.’ “When I was young, I thought I’d never be a beautiful bride. It felt surreal trying on size 10 wedding dresses. It was very emotional, too. I’d lost all that weight and was marrying the man of my dreams in a gorgeous dress that fitted me perfectly. It was an amazing feeling.”

Their first child, Nicholas, was born in 2013. During her pregnancy, Jacqueline gained 22kg. “I was always hungry and I let myself eat whatever I liked,” she says. “It was so hard for me to see myself big again, but I told myself it would all be fine after the birth. Of course, it wasn’t.” When Nicholas was five months old, Jacqueline’s weight had climbed to 87kg. “I was due to go back to part-time work in four months. I wear a uniform for my job and when I pulled it out to try it on and it didn’t fit, I sat down and cried. It felt as if I was going to return to the old, self-conscious me — the last thing I wanted.”

A few days later, while scrolling through her phone, she spotted an email from WW offering half-price membership. It was the sign she needed. “I had 23kg to lose this time but with Jonathan working and me being on maternity leave, I couldn’t get to workshops, so I did my third WW journey digital.” For Jacqueline, the WW program digital has been the best and most rewarding way to lose weight. “I love the WW app! It’s so flexible and I can do everything from the comfort of my own home, which suits me and the boys.

“I missed workshops at first because I liked meeting other people with similar health goals, but now I connect with other members on the app. It’s a great online community that’s always there for you during the highs and the lows. I got back down to Goal in eight months.” When their youngest son Sebastian was born in July last year, Jacqueline again gained weight; this time putting on 25kg. “I was 82kg when I joined WW for the fourth time in August last year, and have already lost 17kg in 10 months,” she says. “Because I was still breastfeeding, I was allowed more Points, so I could still have crumpets, which I craved.” 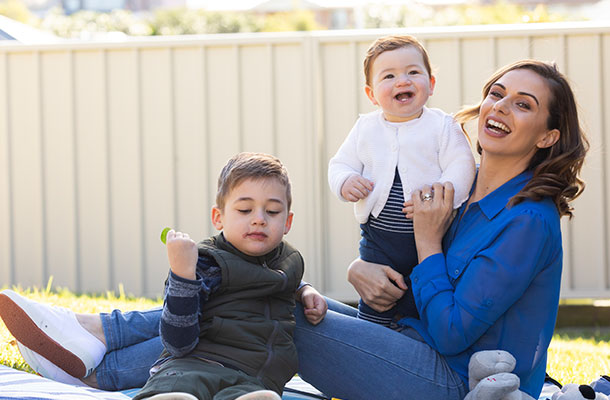 With only 2kg to go, Jacqueline is loving life and still kicking goals. Losing weight and gaining her life back has changed things so much for Jacqueline and her family. Things she never thought possible are a reality, like ditching her high blood pressure medications and taking up boxing. “There’s no way I would have been able to do boxing before, but now I feel much lighter in my body and much happier in myself. I feel like I can do anything,” she says.

“I had to be on blood pressure medication before. Even during both my pregnancies I took them, but this year my doctor said I no longer need them.” Jonathan, who has always been into health and fitness, inspires Jacqueline to stay focused on her health journey. “He is my biggest support and he’s so proud of how far I’ve come. He likes to eat fresh healthy food and loves cooking at home.”

Nicholas, five in September, and one-year-old Sebastian are also benefitting. Nicholas has swimming lessons, plays soccer and is learning martial arts. “We are teaching them to foster a healthy mindset,” says Jacqueline. “Nicholas helps me in the kitchen. He likes to chop up vegetables for dinner. His favourite thing is salmon, which he calls pink fish. “We have a massive fruit bowl and we wash the fruit together and put it on the table, so he always knows where his snacks are. I have so much energy for my boys now and I know they are growing up loving their lives and feeling really good about themselves.”

Jacqueline’s tips for realising your potential

Nobody wants you to succeed as much as you do, so give it everything and do it your way.

Even when you have a bad day or a bad week, just get back on track and keep going towards your goal. It doesn’t matter how long it takes you to get there, it only matters that you do get there.

3. Don’t beat yourself up

We all make mistakes but giving yourself a hard time about it is a major motivation killer. Forgive yourself and move on. Every day is a new day.

4. Listen to your body

Some days will be better than others and plateaus happen. That’s when you need to train harder and get fierce! 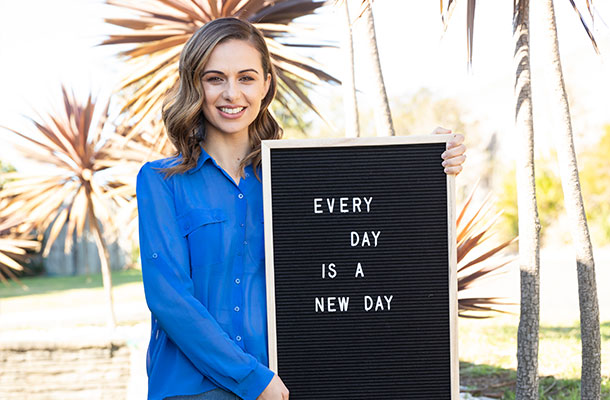 A day on my plate

Breakfast: An English muffin with a small tin of baked beans and an instant coffee with a dash of milk.

Morning tea: 10 almonds and a banana.

Lunch: A multigrain roll with a boiled egg, spinach and tomato, plus an apple.

Dinner: Grilled chicken or salmon with steamed greens or vegetable bolognese with pasta.