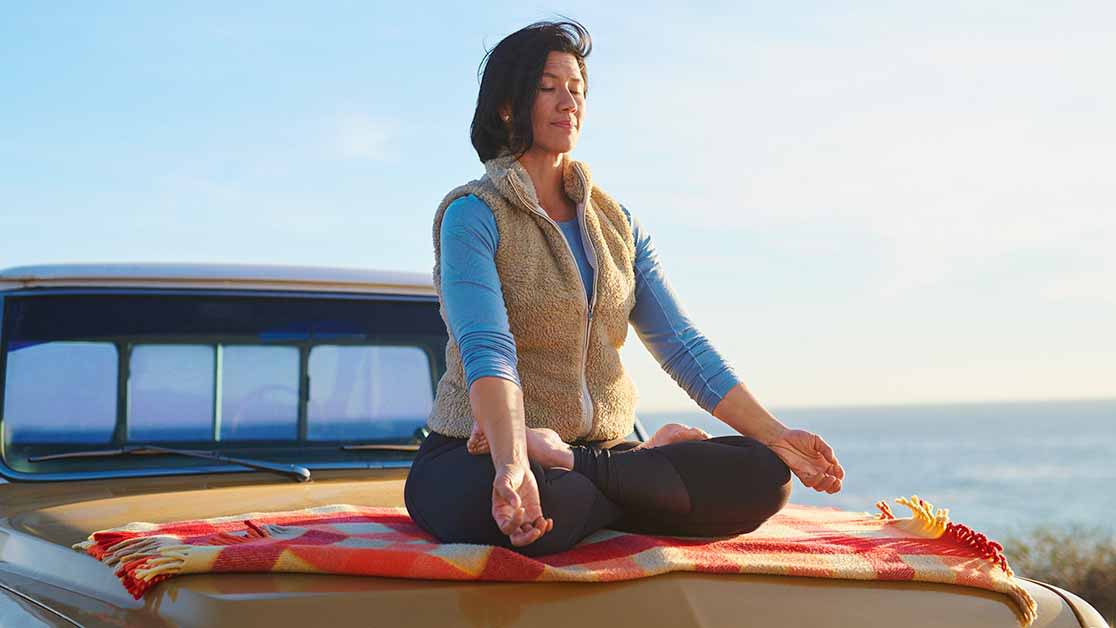 How to meditate: A beginner’s guide to meditation

Close your eyes, take a deep breath, and get comfortable. It’s time to learn how to meditate.
Colleen De Bellefonds

First things first: You don’t need to be an ultra enlightened yogi to learn how to meditate. This mind-body practice—which encompasses a variety of techniques aimed at cultivating focused, nonjudgmental self-awareness—is more approachable than you might think. What’s more, meditation may even improve your health.

In the U.S., meditation has become more popular in recent years. Just over 14% of adults got their zen on in 2017. That’s more than triple the percentage who practiced meditation in 2012, according to a 2018 report from the National Center for Complementary and Integrative Health (NCCIH).

The trend mirrors growing scientific interest in meditation. “Over the past decade, there’s been a tremendous increase in the amount and quality of research about its potential role in health and wellbeing,” says Dr. Rashmi Bismark, MD, MPH, a physician specializing in preventative health and a certified yoga instructor based in the island territory of Jersey.

Rooted in traditions thousands of years old, including Ayurvedic practices and Buddhism, meditation gets its modern-day staying power in part from being broadly accessible, says Dr. Gregory Brown, MD, a psychiatrist, certified yoga teacher, and spokesperson for the American Psychiatric Association. “Meditation is available to anyone regardless of age, physical condition, gender, or ethnic background,” he says.

Read on for a helpful guide to popular forms of meditation, advice on meditation for beginners, and a closer look at the potential health benefits of meditation, from improved sleep to reduced stress.

Meditation 101: The basics for beginners

If you’re new to meditation, you might be more familiar with the concept of mindfulness: an awareness of thoughts, feelings, and sensations in the present moment, without value judgments. You can practice mindfulness in pretty much any situation—while eating breakfast with your family, while brushing your teeth, while inching along in rush-hour traffic….You get the idea.

Meditation touches on a lot of that thinking but is generally a more intentional act—something you do in a quiet setting during time you’ve set aside for that purpose, according to the NCCIH. Think of it as a form of training: You learn to continuously bring your attention back to the present to help develop a greater sense of focused calm and awareness in your everyday life.

Meditation techniques are numerous—some call for being seated, while others call for lying down, standing, or even moving. According to Dr. Bismark, the common thread is that with regular practice, meditation can help dial back the brain’s tendency to activate the sympathetic nervous system, which governs the body’s “fight or flight” responses to perceived stressors or threats. Later in this article, we’ll take a deeper dive into the research on meditation. First, here’s a bit more on different techniques.

The goal of mindfulness meditation is to practice being fully in the now. “It’s about remaining connected to your thoughts and open to receiving incoming experiences or sensations,” Dr. Bismark explains. Approaches to mindfulness meditation vary—some people focus on their breath; others may follow a body scan exercise to ground themselves in the moment. The goal is to feel present in a spirit of equanimity, without reflecting on the past or speculating about the future. With regular practice, Dr. Bismark says, mindfulness meditation can help people become more aware and appreciative of everyday experiences, such as tasting food and spending time in nature.

Other types of meditation

There’s no one perfect way to meditate. Here are some other widely used approaches and techniques.

Loving kindness meditation is a concentration practice that involves mentally directing benevolence toward yourself and others, often by repeating a phrase or recalling a memory that evokes a sense of connection, compassion, and forgiveness. Such thoughts can carry through in everyday life to deepen and enrich relationships, Dr. Bismark says.

Guided meditation is any meditation practice that’s led by another person, whether in a group, one on one, or through a virtual channel such as audio track or podcast. Guided sessions are available for a range of meditative disciplines and can be helpful if you're new to meditation and unsure of where to start. Still, even experienced practitioners stand to gain from guided meditation, Dr. Bismark says: “The benefit may be insights that trigger greater awareness in yourself.”

Zen meditation is rooted in Buddhist spiritual practices, though it’s also popular in secular circles. Zen meditation often calls for a specific posture: sitting cross-legged in a lotus or half-lotus position with palms pressed together at the lower abdomen, chin tilted downward, mouth closed, and gaze loosely directed forward. The general objective is to achieve a state of self-awareness and insight without focusing on any particular thought or mantra.

Transcendental Meditation, also known as TM, is a technique that was developed by Maharishi Mahesh Yogi (1918–2008), a spiritual advisor known for his work with the Beatles. TM is centered on repeated mantras—words, sounds, or phrases—with an aim of helping the mind transcend surface-level awareness to find a “deep inner silence.” Maharishi Foundation USA, which certifies TM classes and instructors, recommends practicing for 20 minutes twice a day.

Yoga, tai chi, and qigong all involve movement with focused, meditative intent, Dr. Bismark explains. Yoga is a series of postures and breathing exercises commonly practiced to increase flexibility, physical strength, and relaxation; qigong is a centuries-old practice that combines physical movement, breathwork, and meditation to promote healing and balance; and tai chi is a related form of moving meditation and also a martial art. These might be good practices to explore if you’re looking for an extra dose of inner calm with your workouts, Dr. Brown says.

Benefits of meditation: What the science says

Despite having existed for millennia, meditation remains an active area of study. Due to limitations of early research—such as small sample sizes and lack of control groups for comparison—rigorous investigation is still needed for us to fully understand the potential health impacts of meditation, according to a 2017 article in the journal Perspectives on Psychological Science. Here are some areas researchers are exploring.

Growing evidence supports the idea that meditation can have a calming effect on the body, according to a 2017 meta-analysis of 45 randomized controlled trials published in the Journal of Psychiatric Research. Across diverse populations, regular meditation practice was associated with reductions in physiological markers of stress, such as the hormone cortisol.

In a 2014 review of 47 studies involving 3,515 adults, eight weeks of regular meditation was associated with moderate improvements in symptoms of anxiety and depression. The findings add to those of a 2012 meta-analysis of 36 studies, which suggested that meditation may be an option for managing anxiety symptoms. If you live with anxiety or depression and want to try meditation, Dr. Bismark suggests asking your doctor or therapist for guidance on incorporating the practice into your overall care plan.

Mindfulness meditation may be helpful for managing unhealthy patterns of eating, such as binge eating and emotional eating, a 2014 review of 14 studies found. (In that analysis, results were mixed concerning the potential effects of meditation on weight loss.) This is another case where it’s a good idea to get your doctor’s input on whether meditation might be helpful to you, Dr. Bismark says.

Some preliminary evidence suggests that meditation may be good for the brain. In a small 2018 study, volunteers who listened to a 10-minute, guided mindfulness meditation exercise performed better on computer tasks afterward than volunteers who listened to a 10-minute science lecture. As for long-term brain health, a 2014 systematic review outlined in The Journal of Alzheimer’s Disease suggests that regular meditation may help counter the atrophying of gray matter associated with some neurodegenerative diseases.

In a small 2014 study conducted by the National Institutes of Health, adults with chronic insomnia who practiced mindfulness meditation felt less keyed up at bedtime and experienced fewer waking minutes overnight than volunteers who didn’t meditate. Another small study, this one involving 49 older adults who were experiencing regular sleep trouble, reinforces those findings: Volunteers who followed a 6-week meditation program saw stronger improvements in sleep quality and daytime fatigue than those who took a 6-week class on sleep hygiene.

In a 2020 meta-analysis of studies involving 6,404 volunteers taking opioid medications for pain, meditation was one of several mind-body therapies linked with a moderate to strong reduction in pain symptoms. (Cognitive behavioral therapy was another.) The findings were published in the journal JAMA Internal Medicine.

Meditation practices that are developed to elicit goodwill—such as the loving kindness technique described earlier in this article—may boost positive emotions and make people feel more compassionate toward others and themselves, according to a 2014 meta-analysis of 22 studies.

How do you meditate?

Opportunities abound for learning how to meditate. Options include in-person classes, meditation retreats, and meditation apps offering guided audio meditations. (The popular app Headspace is available to WW members in the WW app.) Feel free to explore and see what resonates with you, Dr. Brown says. The goal is to find an approach that you feel comfortable practicing regularly.

The upshot: Are you ready to start meditating?

If you want to start meditating, you’re ready! Meditation can be a helpful tool for coping with daily stress and the overstimulation of a hectic world. Some research suggests it may also benefit long-term health. Meditation techniques vary—there’s no “perfect” way to meditate, experts say. Use that freedom and flexibility to develop a meditation practice that works for your lifestyle.

Colleen de Bellefonds has been covering health and wellness for over a decade for publications including U.S. News & World Report, Women's Health, Vice, Prevention, Healthline, and more. She lives in Paris, where she shares her croissants with her dog and plans her weekends around runs by the Seine.