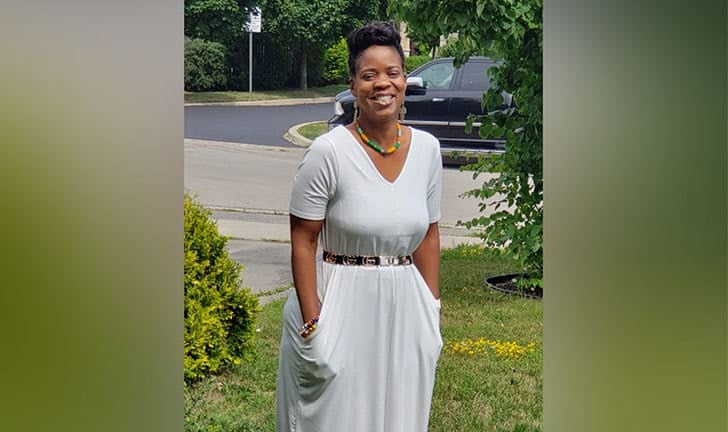 How Patvera changed her lifestyle and surpassed her goals
Sarah Munn

Patvera had tried all sorts of different approaches to losing weight but nothing had worked sustainably. She began trying different strategies in 2014, but four years and some yo-yo dieting later, she had yet to reach her fitness goals.

A conversation with a work colleague, who was also her gym buddy at the time, led her to WW. She’d noticed her friend was successfully losing weight and wanted to know what she was doing. So, with that conversation in the back of her mind, when Patvera joined WW in February, 2018, it was a quick decision to take the leap and sign up. Today, she’s revamped her lifestyle and lost more than 50 pounds. The backpain she used to have is gone, and she says she sleeps better now, too.

“Two years in, I’m still here,” she says, and a lot of things have changed.

Sometimes, when she’s shopping, Patvera says she still catches herself gravitating toward the XL sizes. Then she remembers, “Now I’m a medium.”

“When you lose weight, you’re like, ‘Oh wow, I can do this. I don’t feel this anymore. I can walk in heels and walk comfortably.’”

Patvera, who is originally from Ghana, had to develop some new kitchen habits when she started WW, but she didn’t have to sacrifice flavour or feeling full.

“I’m an African, right, we don’t weigh things, we don’t measure things,” she laughs, “we just gauge things, right, and then we eat a lot of carbs, a lot of high fat.

“With us, when we cook, you have to see the oil on top of the food,” she explains with a chuckle.

“I started changing my way of cooking,” she adds.

Instead of frying, now she bakes or stir-fries, and instead of vegetable oil, she uses olive.

Portion control has also been key to her success. Instead of using a ladle to portion out her rice at mealtime, she’ll use a measuring cup. Instead of two slices of bread, she’ll have one, and she’s still always full after a meal.

“I lost weight the first week,” she says.

Patvera started on myWW with the Blue plan and has since switched to Green, as she finds it more balanced for her.

“Green is better for me,” she says, explaining that the SmartPoints system in that program fits into her lifestyle. With Blue, she says she found she was eating a lot more ZeroPoint foods and saving up more of her SmartPoints for snacks.

Patvera’s success on WW is part of what keeps her sticking with the program. With a background in nursing, she also appreciates WW’s holistic approach, because it doesn’t just focus on food, but also takes into account the effects of stress, sleep and exercise on the body.

Even when it gets difficult, she finds a way to keep going.

“It’s very challenging, to tell you the truth,” she says. But when things get tough, she reminds herself how far she’s come.

Last summer was one of those difficult periods.

“I find summer to be very difficult because of the picnics and all that,” she says.

Last year, the scale wasn’t moving and she hadn’t yet reached her goal of losing 50 pounds. So she quit the program for a while. Patvera rejoined that September, but then a few months later, COVID-19 hit, adding another blow. She’d booked a cruise trip in March and couldn’t go because of the international lockdowns, leaving her feeling down.

She went to a couple of WW Workshops, and they helped inspire her to get back on track. “I’m gonna come out of this [the pandemic] strong. I can do this,” she said to herself at the time.

Not only did she hit her goal she exceeded it.

“Where I am now, is much better than where I was last year.”

When asked what advice she’d share with anyone on WW who is struggling right now, Patvera had three tips.

1. It’s about progress, not perfection

“The program is about progress and not perfection, because we are humans, we can never be perfect,” she says.

2. Focus on your mindset

“Always have the right mindset, that you are in this to win, this is a journey. It’s a long, life journey, and it’s a lifestyle change. You don’t come in, say, ‘I’m gonna lose and then when I lose I’ll go back to my bad habits.’ No. Gradually, as you start eating healthy, you start engaging in physical activity, it becomes a part of you,” Patvera says. “Like, I exercise Monday to Saturday. Sometimes I just don’t feel like getting up but then I think, ‘Oh, once I exercise in the morning, I feel great, so I’m just gonna get up and do it.’”

Having the right mindset can help you stay on track, even when you feel like giving up.

“If you want to give up, just go to a workshop and just hear the stories because everybody is facing a challenge, you are not the only one. … No matter what, keep going to your workshops,” she adds.

For Patvera, planning is crucial to her success, and planning means meal prep.

She does her grocery shopping and meal prep on the weekends – chicken, vegetables and soups are her staples.