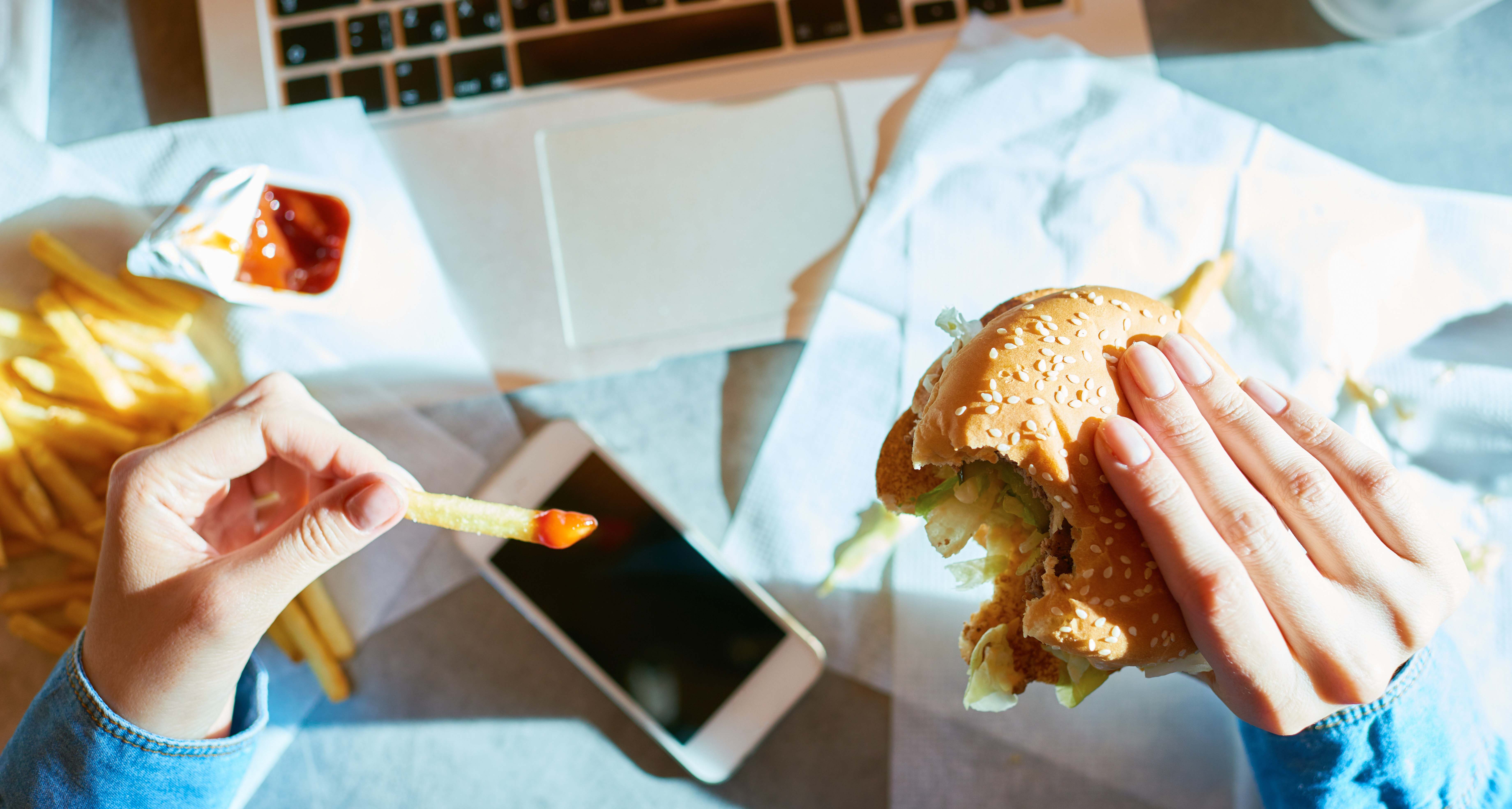 Why Distraction-Free Eating Should be More of a Thing

Focusing on your food can be the difference between fullness and nonstop noshing. Here’s why.
Jessica Cassity

Having dinner in front of the TV—or while holding a fork in one hand and your smartphone in the other—may seem like a harmless guilty pleasure. But a small study out of the University of Bristol in the United Kingdom suggests that when you watch TV or surf the web during snacks or meals, you’re likely to take in more calories—sometimes up to 100 per cent more than you would have otherwise. In time, this can lead to sticky keyboards—and weight gain.

Why does multitasking while you eat lead to an increase in the amount you eat? Researchers have found that the more distractions you have during mealtime or when snacking, the less satisfaction you get from eating. Many distractions come in digital form, with TV, computers, and phones being the biggest culprits. But even more novel tasks such as multitasking during mealtime while reading a book or newspaper can have a strong influence on how much we consume.

Measuring out a healthy portion size is important during all meals and snacks. But it’s especially so if you’re dining while distracted. Here’s why: If you’re busy focusing on something other than your food, it’s easy to miss the physical and visual cues that you’ve had enough to eat, says Jeff Brunstrom, PhD, a professor at the University of Bristol, who has studied the subject. If that internal warning alarm—which can be triggered by the feeling in your gut and your perception of how much you’ve had— doesn’t go off, you could possibly consume double what you initially intended.

Imagine that you grab a bag of chips and bring it with you to the couch. You may have meant to have only a few handfuls, but if your brain is busy trying to unravel the plot of a murder mystery it’s not going to signal to your body that it’s time to stop reaching for more. So you keep digging in, stopping only when you get the physical cue of your fingers hitting the very bottom of the bag. The mystery of what’s on TV may be solved, but you may never know exactly how much you ate during that sitting.

Do You Remember Your Last Meal?

Another reason you may reach for an after-dinner snack during an evening on the couch is that multitasking during mealtime can hamper your brain’s ability to gauge exactly how much you ate. “Our research shows that memories for the amount of food we consume influence how hungry we feel later,” says Brunstrom. “In other studies, we’ve shown that distracting people while they eat can influence the formation of these memories, leading to greater consumption of food at a subsequent meal.” For example, Brunstrom worked on a study that found that people who played video games during lunch later ate snacks that were double the size of snacks consumed by those who’d focused on their food.

If you’re super focused on your Facebook feed, your brain doesn’t get the chance to savour and store the memory of the sandwich or salad you had for lunch. That means you may get hungry more quickly than you would have if you’d eaten while free of distractions. Because your brain is storing incomplete information about what you ate, you might feel completely ravenous by the time you’re ready for your next meal. That means you may overeat not only during your distracted meal, but also at the meal directly following it.

When you’re able to focus on your food you’ll savour the meal more, feel satisfied more quickly, and hold on to any feelings of fullness for longer. To set up a distraction-free dining experience, walk away from your gadgets and devices and take a pause from your reading or paperwork. Measure out a healthy serving size and, as you eat, pause between bites. This will give you time to really taste what you’re eating, and allow your body to process just how much you’re eating.