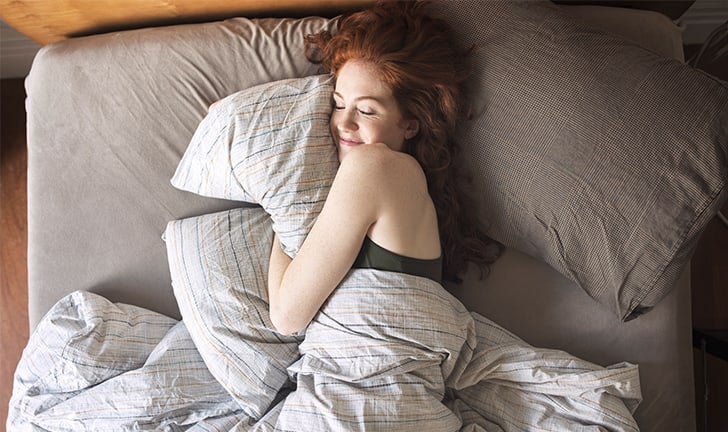 How these two go hand in hand
Sarah Munn

If you’ve ever had a bad night of sleep and felt foggy the next day, you know how important a good night’s rest is for our brain function. Here, we delve a little deeper into just how important it is when it comes to cognition and memory.

Sleep is important for our brains, explains Dr. Uma Naidoo, MD, a Harvard-trained nutritional psychiatrist, professional chef, nutrition specialist, and author of the bestseller This is Your Brain on Food. Sleep helps us rest and it restores our energy.

“Sleep has been proven to improve memory recall, regulate metabolism and reduce mental fatigue. When we are asleep, the brain recharges and reorganizes itself; toxic waste and by-products from the day are removed. Sleeping helps clear out the brain,” she says.

Dr. Chelsie Rohrscheib, head sleep specialist and neuroscientist at Tatch, explains that although we are resting while we sleep, the process of sleep is actually an extremely active one in which many essential biological activities are carried out.

“Some of these processes include hormone release, immune system strengthening, tissue and cell repair, memory consolidation, brain waste clearance, and brain remodelling, Rohrscheib says. “Most of these processes occur during later stages of sleep, stage 3 of Non-REM slow-wave or deep sleep, and stage 4 REM sleep, when we experience dreaming.

“During slow-wave, deep sleep the brain uses the glymphatic system to clear away metabolic wastes that accumulate up during the day,” Rohrscheib says. “When you’re sleep deprived, these wastes accumulate and can reduce the function of your brain cells (neurons), by making it more difficult for them to communicate. This can cause large deficits in our cognitive functioning. Scientists have also found that reduced brain waste clearance over time increases your risk of developing neurodegenerative disorders like Alzheimer’s disease and dementia.”

Rohrscheib explains that both deep and REM sleep are also needed for neuroplasticity, which is the brain’s ability to adapt to changes in an individual’s environment by forming new neural connections over time.

Deep and REM sleep are also required for memory consolidation, she adds.

“During the day, the things we learn are stored as short-term memories in the area of the brain called the hippocampus. In order for a short-term memory to be turned into a long-term memory, the brain [has] to relocate the information from the hippocampus to the neocortex. This movement and storage [of] memories occurs during the later stages of sleep. People who are sleep-deprived retain less information and perform poorly on memory tasks compared to people who get sufficient sleep.”

Last but not least, sleep is important for attention regulation, Rohrscheib says.

“Every night as we sleep our neurons get a reboot to help them better be able to filter information in our environment. When we have to concentrate on a task such as studying or taking a test, we have to first stop paying attention to all of the unimportant stimulation coming from our environment. When the brain is sleep-deprived, it has a much harder time filtering out unimportant stimulation, making it harder to focus and learn,” she says.

“This is also why sleep deprived children have worse educational outcomes,” Rohrscheib adds.

“Sleep apnea,” Rohrscheib says, “occurs when a person momentarily stops breathing while they’re asleep. … Every time breathing is blocked, carbon dioxide levels rise in the blood. This triggers the brain to wake up to recommence breathing. The constant awakenings keep the brain from cycling through all four sleep stages, making it impossible to get enough deep, refreshing sleep. When a person is deprived of deep and REM sleep, they are not able to properly consolidate memories.”

The long and short of it

Poor sleep has both short- and long-term effects on cognition.

“In the short term, sleep deprivation lowers mood, reduces your ability to pay attention, so you have difficulties learning and retaining new information, and makes you more prone to accidents and injury,” says Rohrscheib. “Short-term sleep deprivation also reduces your ability to perform basic cognitive tasks such as reading, speaking, and moving.”

How much sleep do we need?

Rohrscheib says infants require the most sleep, needing up to 17 hours of sleep every day.

“Toddlers need 11-14 hours. Children generally need more than 10 hours of sleep and adolescents and teens require up to 10. By the time you reach adulthood, you require 7-9 hours of sleep per night and this doesn't change, even in seniors.”

Naidoo recommends avoiding caffeine after 2 p.m. and avoiding alcohol a few hours before bedtime. It’s also generally advisable to avoid eating right before going to bed, especially if it’s anything low-fibre, highly processed or full of sugar, as it might cause sleep issues and even heartburn.

“If you’ve eaten dinner earlier and are feeling hungry before bedtime, a tip is to drink a glass of plain water and wait five to 10 minutes,” Naidoo says. “Hunger is partly controlled by the hypothalamus in the brain. Since our hunger and thirst signals from the brain can be confused, this tip may help stave off hunger before bedtime, too.”