The Skinny on Whole-Wheat Pasta

What are the benefits vs. regular pasta?
By Juliet Glass

Whole-wheat pasta used to be hard to stomach. Sure, it was good for you—loaded with vitamins and minerals and containing two to three times as much fibre as refined-wheat pasta—but the texture ranged from brittle to gummy while flavour traveled from bland to sour.

The good news is that in recent years the quality of whole-wheat pasta, which is made from flour that uses the entire grain seed and contains slightly more protein than refined-wheat pasta, has improved considerably without sacrificing nutritional benefits.

Today's high-quality whole-wheat pastas, which run from tan to light brown in appearance, have the same toothsome texture as the best refined-wheat pastas and either mimic their flavour or veer off in entirely new and delicious directions, hitting nutty and earthy notes.

What’s new at the store?
Labeling can be confusing. Some companies describe their whole-wheat pasta as made from “whole durum wheat” while others list “whole semolina.” Both describe coarsely ground whole durum wheat. Durum wheat, rich in protein and gluten, is the preferred wheat for pasta-making, whether refined white or whole wheat. (Whole wheat uses the entire wheat berry, while white pasta processes parts out.) Some whole-wheat pastas, like white pasta, are further enriched with riboflavin, niacin, folic acid and the like.

Also available are hybrid whole-grain pastas, crafted from durum wheat flour blended with other whole grains such as oat, barley, spelt and protein-rich legumes including lentils and chickpeas, for an additional nutritional boost. Note that pastas made from other whole grains—faro, spelt, brown rice, corn, quinoa and buckwheat—are out there, each with their own texture and flavour, and with a clear nutritional edge over refined-flour pasta.

How does it taste?
Some whole-wheat pasta is so similar to refined-wheat pasta in taste and texture that if you were to taste them blind, you might not be able to tell the difference. Other varieties boast varying degrees of earthiness, nuttiness and sweetness, and can have a slightly heartier, pleasantly coarse texture. With so many companies making whole wheat varieties, if you are unhappy with one brand, try another until you find one you like.

Recipes
With its rustic taste and texture, whole-wheat pasta can add a new dimension to many of your favourite dishes. Taste for yourself, try making one of these pasta meals tonight, all for 7 SmartPoints or less: 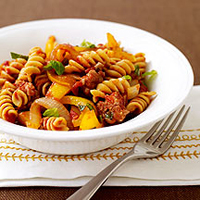 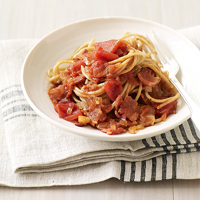 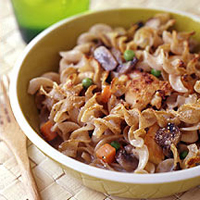 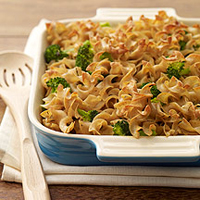