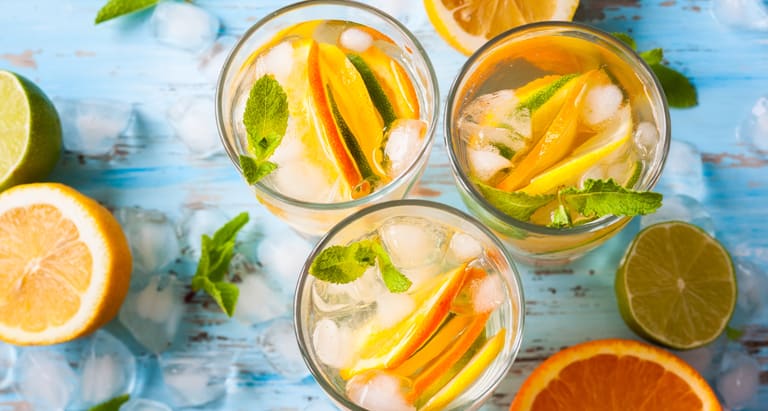 Sippin’ in the Sun

This year the summer drink trend of the moment is all about putting a spin on the traditional. Think; boozy seltzer water, wine from a can, and chic after-dinner digestifs. Go beyond your regular glass of rosé or craft beer and try something new when the weather heats up. Whether you’re looking for something ready to drink, or you prefer to play bartender, there’s something for everyone in this eclectic mix.

Tinto de verano literally means “red wine of summer” in Spanish and this ridiculously easy Castilian sipper will be a guaranteed hit at dinner parties on a hot summer night. Make it with equal parts of red wine and sparkling lemonade, tinto de verano tastes like ultra-refreshing sangria without the heaviness of brandy. Lighter red wines such as merlot and Beaujolais are good options to use as they’re not too heavy and their floral fruity notes mix well with the lemonade. Make a big pitcher and chill for a few hours to let the flavours mingle, top with ice and serve in highball glasses.

Digestifs are making an entrance as a sophisticated way to end a delicious summer meal. A digestif is traditionally served after dinner to help with - you guessed it  - digestion, and is meant to be sipped in small quantities. Herbal liqueurs have been leading the way in digestif popularity, with retro liqueurs such as fernet, Chartreuse, and Amaro making a welcome appearance on restaurant dessert menus. Some digestifs are meant to be serve chilled or at room temperature, so check the bottle for a suggested serving temperature.

Wine in a can

It was inevitable that wine would eventually end up in a can,  and it’s about time, as wine in a can is an amazing way to make your backyard picnic-friendly. And another added plus? Canned wine is perfect for fitting into your daily diet plan because it’s been premeasured, so you know exactly how much you are imbibing. It’s also great for keeping sparkling wine fizzy. It looks like the beverage industry is catching on that this is how millennials want to drink wine which means a growing selection for the consumer, giving you the chance to try the canned version of everything from pinot gris to Malbec. Grabbing a six-pack has never been so classy!

Flavoured seltzer water saw a serious wave of popularity in 2016 and piggybacking on its new chic status this year seltzer water has been spiked with booze meeting the need of the growing demands for more calories conscious drinks. Clear spirits like vodka and gin are most popular and make a light but lovely cocktail, flavours run anywhere from lemon, to cucumber, to raspberry. Cocktails made with seltzer water are also less calorific and come  pre-portioned, which means no measuring and mixing for you! Beat the heat with a highball glass filled with spiked seltzer water, fresh fruit and plenty of ice.

While craft beer has definitely moved into the mainstream, craft spirits are really starting to have their day. Like breweries before them, urban distilleries are now popping up in many Canadian cities. Anything from artisanal sake to triple-distilled vodka is fair game, and the results are as interesting as they are tasty. While craft spirits can run on the pricey side, you can often get smaller quantities as well as tastings if you make a trip to the distillery. Try drinking the spirit neat or with plain seltzer when first sampling it to really appreciate the subtle difference in taste.