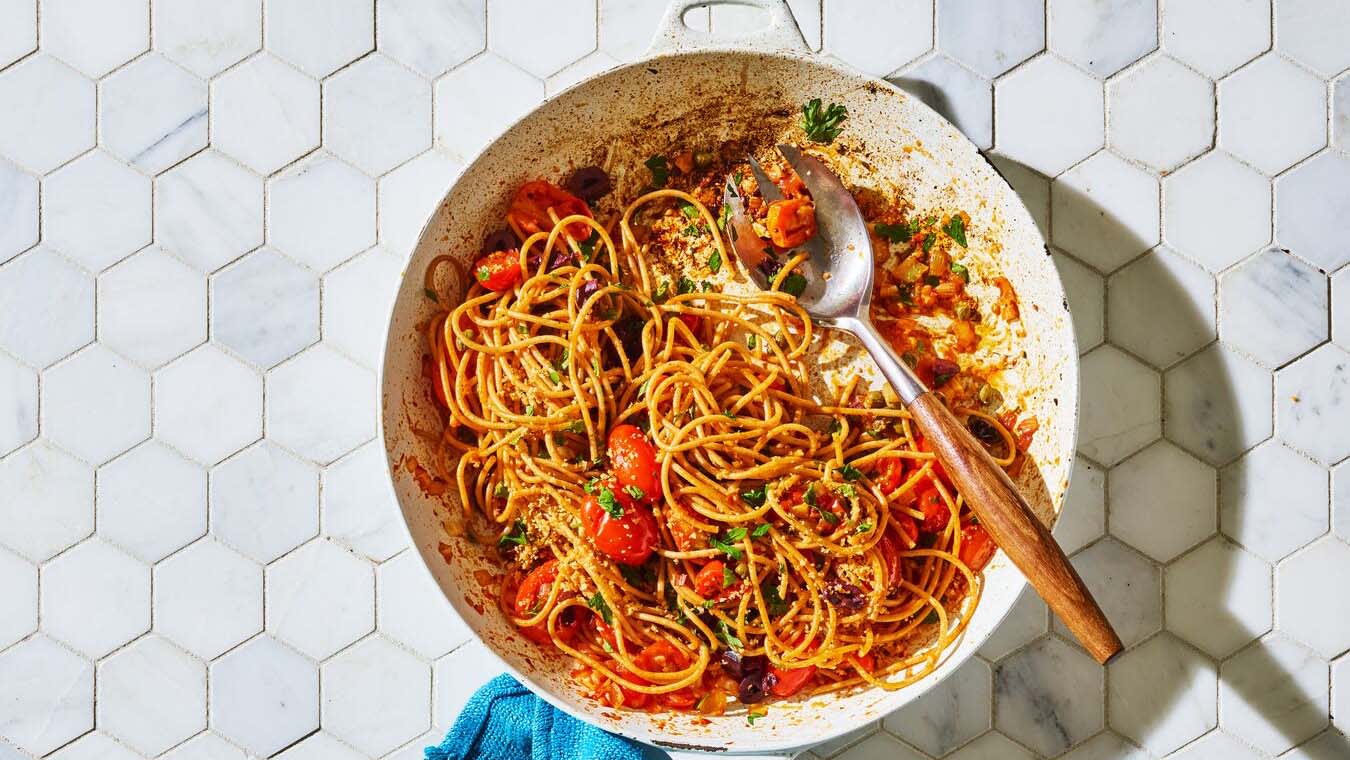 Nervous of noodles? Scared of sauce? Learn the wisest way to build your perfect plate.
By Frederico Nogueira

When it comes to weight loss, pasta gets a bad rap. Sure, it’s heavy on the carbohydrates and regular varieties don’t pack a huge protein punch, but that’s no reason to remove it entirely from your diet. Like many perceived culinary villains, it’s not usually the pasta itself that poses the greatest danger to your weight loss efforts — it’s the stuff you pile on top. Oily sauces and fatty meats and cheeses can rack up a pile of Points in a hurry.

As recipes editor and nutritionist Leslie Fink reminds us, “There is no such thing as a bad food, including pasta; just too much of a good thing.”

By playing around with noodles, toppings ,and sauces, you’ll see that there are many lighter options that will still give you your pasta fix without going overboard. You’ll also see where the biggest pitfalls are. (Sausage, meatballs, and vodka sauce anyone?)

Pasta primer
A 1-cup (250 ml) serving of cooked, regular pasta can come in at around 5 Points, while whole wheat can be 0, depending on your plan. You might want to opt for the whole wheat option as research has shown that a balanced diet rich in whole grains can help with weight loss and maintaining a healthy body weight.  A surefire way to pile on the Points is if you’re doubling up on portions, which is all too easy to do when it comes to serving pasta. In fact, many restaurant portions can be three or four cups. Tack on oil or shredded Parmesan cheese, not to mention sauces and other toppings, and you could be consuming more values in one meal than you’re allotted in a given day.

Home cooks looking for a serious substitute that will save you, should consider giving spaghetti squash a try. You roast the squash and rake out the flesh so it forms spaghetti-like strands. It doesn’t taste like spaghetti but mimics its shape so with a little imagination it can make a decent substitute for pasta. “People either love it or hate it,” says Fink, “but for zero Points values per cup, if you’re really craving pasta, it might just do the trick topped with some sauce and cheese. I really like it.”

Whether you’re going for good old-fashioned pasta or its veggie substitute, Fink says there’s one thing you should be wary of, no matter how tempting it may be: Garlic bread. Made with refined-flour white bread and heaps of butter, a single piece of garlic bread can come in at 8 Points — more than 1 cup (250 ml) of pasta.

Little changes make a big difference
Try some of these tricks for lightening up your pasta.

Also, make sure you carefully choose your sauces. While there are good options out there, some of the most popular sauces pack a lot of Points.

Bump up the volume
Fink is a big fan of boosting volume with veggies rather than supersizing pasta portions. “I love to roast vegetables with cooking spray and Kosher salt and then cut them into bite-size pieces to toss into pasta recipes,” she says. “Peppers and onions are especially wonderful because they feel very rich, and are a fabulous way to increase your portion size for ZeroPoints values.”

Most seafood, when boiled or steamed, is naturally low or ZeroPoints values depending on your plan yet contains protein and healthy vitamins and minerals. Try adding shrimp to your next pasta dish.

Also consider strongly flavoured items that, ounce for ounce, may be quite heavy onPoints, but their flavours help a little go a long way, such as a teaspoon (5 ml) of good-quality extra virgin olive oil, or fresh Parmigiano-Reggiano. Grating the cheese helps it distribute its flavour farther in a dish, and gives it much more flavour than the grated parm you shake from a jar.

Other great mix-ins include crushed red pepper flakes, fresh torn basil or roasted whole garlic cloves (roast a whole bulb by slicing off the very top, spraying it with cooking spray, wrapping it in foil and putting in a 400-degree oven for about 30 minutes, or until the cloves feel soft).

As for sauces, there are many jarred tomato-based sauces that you can use. You need to read the labels though — some have lots of cheese and oil added. To be on the safe side, you can make your own sauce by simmering seasoned crushed tomatoes, plain canned tomato sauce, salt, pepper and herbs. Toss that with roasted veggies, some whole wheat spirals (a shape that holds sauce well) and some shrimp, sprinkle with freshly grated parm, and buon appetito!