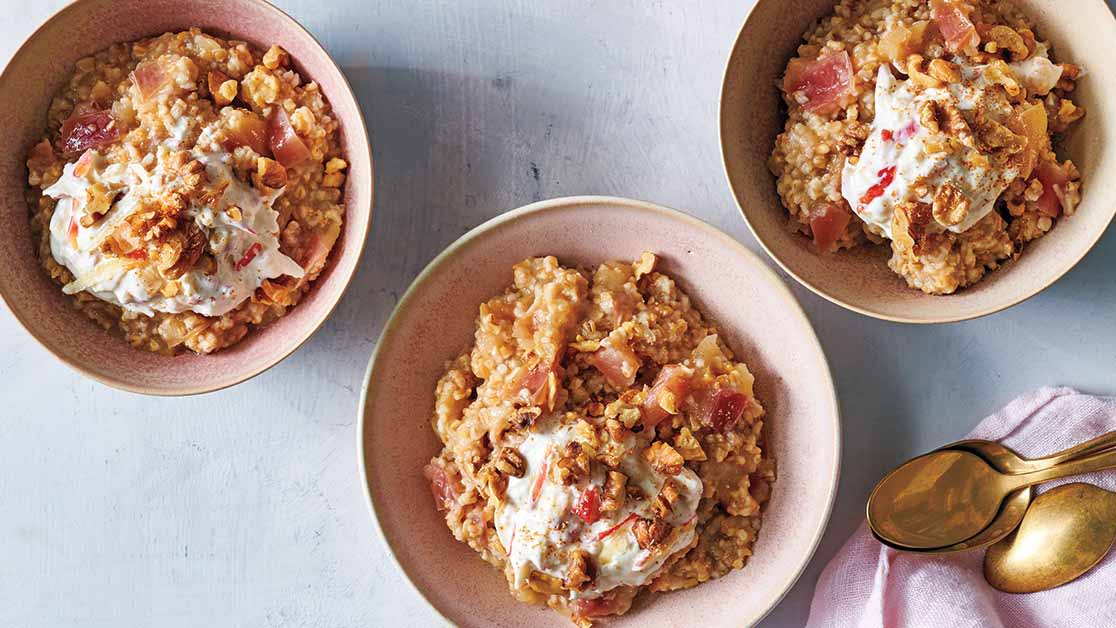 Is oatmeal good for you?

Can eating oatmeal help you reach your health goals? Read on for the science-backed health benefits of oatmeal.
Karen Ansel, MS, RDN

If someone told you there was a food that could curb hunger, boost energy, and lower cholesterol, you’d be all over it, right? Say hello to oatmeal! It's made from oats, one of the healthiest (gluten-free!) grains around. Sadly, they don’t get nearly the love they deserve. “Some of my clients don’t eat oatmeal because they think it will taste like mush or are confused about carbohydrates,” says Caroline West Passerrello, MS, RDN, LDN, a spokesperson for the Academy of Nutrition and Dietetics.

Do oats belong in your bowl? Whether they’re rolled, steel-cut, or instant, here’s everything you need to know about these humble grains plus no-brainer tricks to make them taste great:

It’s easy to assume oatmeal is all about fiber. But it offers lots of other nutrients too–one recent study found that overall, the diets of people who down oatmeal daily is healthier than those who choose other breakfast foods.

Here’s how oatmeal stacks up nutritionally:

A ½-cup portion of dry oats delivers about 4 grams of fiber. Half of that is insoluble fiber, the kind that keeps your bowel movements regular. The other half is soluble fiber, which is linked to better heart health. But that’s only part of the picture. Oats contain a unique kind of soluble fiber called beta-glucan that’s shown to lower cholesterol and cause a slower rise in blood sugar after eating. Plus, it may help with appetite control.

Like most whole grains, oats aren’t overflowing with protein, but they do provide small amounts: A ½-cup serving of dry oats delivers 5 grams worth, or roughly as much as ¼-cup uncooked quinoa or ⅓-cup uncooked brown rice. However, the protein in oats is incomplete protein, meaning it doesn’t provide all the essential amino acids the body needs. So it’s not as high-quality as, say, the complete protein in foods like meat, fish, poultry, eggs, dairy, and soy, which contain all nine of essential amino acids.

To pump up the protein in your bowl, try these tricks:

What oatmeal lacks in protein it makes up for in carbohydrates. A ½-cup of dry oats delivers 27 grams of carbs. If that sounds like a lot, remember that all carbs aren’t created equally. “Oatmeal is rich in complex carbohydrates that our bodies need and thrive on for energy,” Passerrello says. “Unlike quickly digested simple carbohydrates, complex carbohydrates take time to dismantle and digest, so they deliver fuel over a longer period.” With only 1 gram of natural sugar and zero added sugar per half-cup, oats get high marks in the sugar department too.

If you’re watching calories but love carbs, oatmeal could be one of the best bargains around. The reason? Oatmeal is low in energy density, which basically means it’s low in calories relative to its weight. Even though dry oats are dense and compact, add water and heat and they swell up a lot. So after that tiny ½-cup of grains is cooked it balloons into a big, visually-satisfying serving for only 150-calories. “Just keep in mind while a simple bowl of oatmeal may seem like a great, filling breakfast, its calories can add up quickly if you're not careful,” says Liz Weiss, MS, RDN, host of Liz’s Healthy Table podcast. “Preparing oatmeal with water delivers zero additional calories, but make it with whole milk, and you've just swirled in 150 extra calories, albeit nutritional ones!” Calorically-dense add-ins like brown sugar, maple syrup, agave, butter, dried fruit, nuts, and seeds can also contribute calories.

Just ½-cup of oatmeal delivers 10% or more of the daily value of key vitamins and minerals like:

With all that nutrition, it’s no surprise that oatmeal can do some pretty great things for your body. Here are just a few of its health perks.


Research reveals that men who regularly eat oats may be less likely to suffer a heart attack. Thank beta-glucan: “The beta-glucan in oats can actually reduce cholesterol by increasing the excretion of cholesterol-rich bile,” says Rachel Begun, MS, RDN, culinary nutritionist and an expert in gluten-related disorders.  Another reason oats spell better heart health? They’re the only grain that contains avenanthramides, antioxidants that quell inflammation and relax the arteries, promoting better blood flow to the heart.


“Emerging research shows beta-glucans may also enhance glycemic control,” Passarrello says. Oats are so effective that a recent meta-analysis of 16 studies found that people with Type 2 diabetes who regularly ate oats had lower blood glucose levels than those who rarely consumed this grain. How so? Researchers suspect that oat beta-glucan slows the release of glucose into the bloodstream preventing spikes that raise blood sugar. This also means less insulin is needed to keep blood sugar in the optimum range.

Oats are rich in fiber and a good source of several vitamins and minerals including manganese and selenium. However, even though oats are naturally gluten-free they can easily be contaminated with gluten during processing. “For those with celiac disease and gluten sensitivity who must follow a strict gluten-free diet, the only safe option is to purchase certified gluten-free oats,” Begun says.

“Few of us get the recommended 25 to 30 grams of fiber each day,” Passerrello says. “With 4 grams of fiber per serving, oats are a great way to reduce the fiber gap.” Not only does oat fiber draw water into the gut and help bulk things up, gut-friendly bacteria that live in the colon love to feast on it. So, think of it as fertilizer to help good gut bacteria grow and thrive.

Research suggests oatmeal can help with weight loss too. Here’s how:

Oats come in lots of different varieties. Two of the most popular are steel cut and rolled. What’s the difference? “Steel-cut oats are whole oat kernels, technically known as oat groats, that are cut into a few pieces with a steel blade, making their pieces larger and heartier so they take longer to cook,” says Michelle Dudash, RDN, author of Clean Eating for Busy Families. “Rolled oats are just that—the groats are steamed, then rolled, making them thinner and faster cooking.” There are nutritional differences too, with some brands of steel cut oats supplying slightly more fiber and protein than rolled oats, says Dudash.

Then there’s instant oatmeal. “Instant oats are usually pre-cooked, then rolled, dried, and pressed slightly thinner than rolled oats,” Dudash says. “They’re also milled more finely resulting in a less nutty taste and smoother texture.” As a result, they get digested faster and may not offer the same slow, sustained sugar release as their less-processed cousins. But that doesn’t mean they’re not worth eating. When researchers in a recent study served volunteers a breakfast of instant oatmeal or an oat-based breakfast cereal, the instant oatmeal group reported feeling more full, less hungry, and consumed fewer calories later on at lunch. Just remember that some instant oats can pack more than their fair share of added sugar. To make sure your favorite brand isn’t one of them, check out the nutrition facts label and the ingredient list.

Oatmeal may seem bland, but its mild taste means it can take on lots of different flavors. The key is to season it strategically. “If you feel like eating something sweet, keep the added sugar—such as white or brown sugar, honey, maple syrup, or agave—to a minimum and opt for natural pops of sweetness with fresh or dried fruit instead,” Weiss says. Or try a pinch of cinnamon or pumpkin pie spice. “If it's savory you're after, top your oats with sautéed veggies, like sliced mushrooms, zucchini, spinach, beans, or tomatoes, and a sprinkle of low-fat shredded cheddar or Parmesan,” Weiss suggests. You can pump up the flavor even more with a dusting of finely chopped basil, parsley, or thyme.

The upshot: Is oatmeal healthy?

Oatmeal can provide the canvas for a nutrient-rich breakfast that makes a great, healthy start to your day, Weiss says. The healthiest way to enjoy oats is when prepared with water, nonfat milk or calcium-fortified plant-based milk alternative. Snack foods that contain oats, such oat pancakes, bars or muffins, might sound like good picks, but they can be filled with lots of hidden sugar, fat, and calories. Plus, they lack oatmeal’s volume and viscosity, so they’re unlikely to be as filling and satisfying. Instead, make the most of your bowl by topping it with fresh fruit or flavorful veggies then seasoning it with the herbs and spices of your choice. Delish!