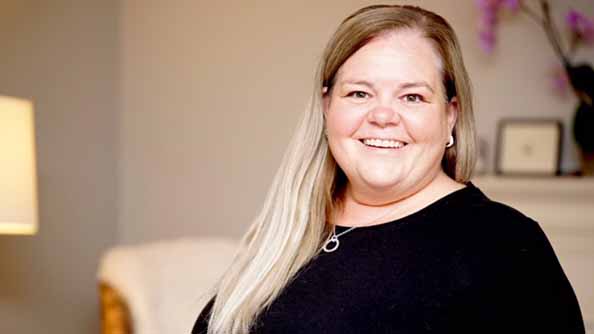 How Stephanie changed her perspective to reach her goals.
Sarah Munn

What she says about the program: “I can’t imagine a day that I ever leave it. I love the structure of it.”

“Five years ago, I just stopped putting myself first,” says Stephanie, a teacher in Brantford, Ont.

She’d known in the back of her mind that she wanted to do something to get healthier for a while but says she just hadn’t found the energy to do it. Then in November 2019, she saw a Facebook post about a WW event in her city. The kick-starter event offered three months of free membership and a chance to get to know the WW community.

Stephanie thought, “That just might be what I need.”

She went to the Sunday afternoon event and loved it.

“It was really incredible,” she says, reflecting on the energy of the day and the resources that were provided.

The following Wednesday, Stephanie was heading to her first WW Workshop. And six months later, to the day, she chatted with us to share her story.

“I’m 48 now, I was 47 at the time, and I knew I was about to start the second half of life, you know, and it was really hard. It was hard to walk up and down the stairs, it was hard to get winter boots on and tie them up and then go over and help my students and get down on the floor and be there for my daughter in a physical way and load things in and out of the car, it was hard and things hurt and I’d get out of breath. And I just thought, I can’t enter the second half like this.”

That became Stephanie’s why – to enter the second half of her life healthy and strong.

“I set the goal of waking up on my 50th birthday feeling good and strong and healthy.”

That time frame of two and a half years took some of the pressure off – she wasn’t looking for a quick fix. And yet without even really being focused on pound loss, Stephanie says she’s had incredible on-scale success – but the non-scale victories have been even more remarkable.

It’s in the little day-to-day things. Things like lugging a huge utility tote of heavy groceries up the stairs a few months ago: “It was so heavy and it was so much work, and I was really having a hard time getting to the top of the stairs. … I thought, I wonder how much it weighs. And so I put it on the scale, and it weighed 25 pounds. And at that point I had lost I think 32 pounds at the time, and I thought, oh my gosh, wow, I used to lug that around. … No wonder it was hard.”

Another non-scale victory pops up whenever she stops to get gas now. The lever to open her gas tank door is in the floor of the car on the driver’s side, and “ever since I’ve had this car, which has been a couple of years now it was hard to reach the lever to open the gas tank, but it isn’t anymore.”

Even putting on shoes has been a victory. Stephanie dug out her summer sandals recently, which she hadn’t worn since last year, and when she put them on, she realized she needed to tighten the straps across the top. “They were so loose and baggy!”

And the key to all of these victories? Her mindset.

On a regular basis, Stephanie reflects in her WW planner about her progress, the hiccups along the way and her goals for each week.

“I knew that it was my mind, was what I needed help with,” she explains. “I knew how to eat healthy, I knew what needed to be done and I feel this new WW program has given me the tools and the space, literally, to keep track of that.”

Stephanie had done WW in the past, and says she knew the program worked from her previous experience. But the focus WW now places on the mindset aspect of attaining goals has made all the difference this time around.

“My mindset has really been the big thing.”

How good Stephanie’s been feeling has also kept her sticking with the program, as has the WW community, which is still going strong even as everything has had to go virtual amid the COVID-19 pandemic.

WW has become a part of her life, Stephanie says, and it’s here to stay.

For anyone thinking about trying WW, Stephanie says, “Just do it. Just do it, you will not regret it. Do it and start small. You don’t have to dive right in and completely give up all the things you think you love that are your comforts, you don’t have to immediately start running marathons. Just start. Walk through the door or sign up for that membership, start tracking your food, just start there.”

And when it comes to moving your body, Stephanie says, start small.

“Go for a 15-minute walk. Start there. Go to the end of your street and back. Walk two houses down and back. Just start,” she says, adding that she wishes someone had told her that a couple years ago.

Reflecting on how far she’s come, Stephanie talks about how differently she feels since starting this journey. “Life is just easier. And I think, if that’s what’s happening now after six months, imagine how I’m going feel on my 50th birthday. I will be ready to tackle this second half. It feels good.”