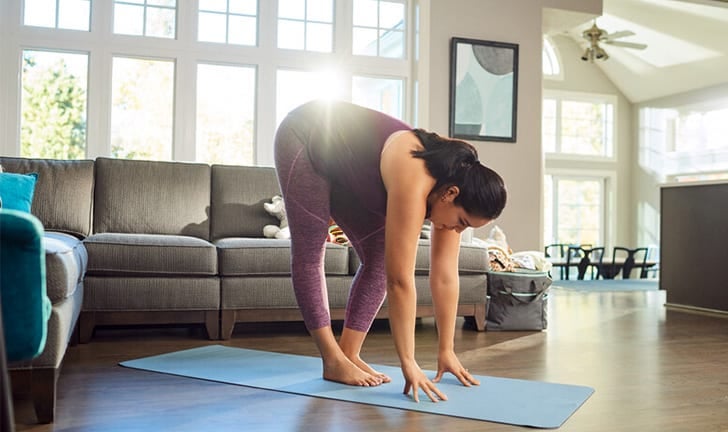 Learning the lingo of yoga

A glossary of helpful terms to deepen your yoga practice.
Sarah Munn

Yoga is an ancient spiritual practice that began in India around 3000 BCE. Although there are many different types, in general, the yoga practised in gyms and studios across North America combines sequences of controlled movements with conscious breathing and meditation for a full mind-body activity.

Hatha yoga is the most popular umbrella of yoga, focusing on physical yoga or the yoga of postures. It aims to unite the body and the soul, combining physical poses, breathing techniques, and meditation to create good health and free the mind.

Perhaps the most common type of yoga is Vinyasa yoga. Vinyasa is derived from a Sanskrit word and refers to tying breath and movement together. Vinyasa yoga features a sequential flow of movements that can be done almost like a moving meditation.

Other common types are Iyengar yoga – which emphasizes breath control and the use of props such as blocks and straps to aid practitioners in the various postures – and Bikram yoga, which features 26 postures and two breathing exercises and is conducted in a hot, humid room.

Whatever type of yoga you’re doing, and whether you’re a seasoned practitioner or a beginner yogi, there are a number of terms – often Sanskrit words – that you’ll hear during a session. We asked a few experts for some words you should keep in mind.

Robyn Parets, founder and CEO of Pretzel Kids, a children’s yoga company, says one of the words you’ll hear a lot during a yoga class is asana.

Asana: “The word asana traditionally means ‘seat’ but is commonly known as a yoga pose in the generic sense. Asana is often thrown around in yoga classes. So, if a yoga teacher says, ‘Now we’ll do our standing asana sequence’, she means, ‘Now we’ll do a series of standing yoga poses’.

Yogapedia editor Rebecca Koehn adds that knowing this one simple term can make understanding other Sanskrit words much easier. “Almost every posture name in Sanskrit will have ‘asana’ tucked on to the end. Thus, knowing asana refers to a posture, a new yogi will be able to start to associate the names their teacher says to the poses they are doing.”

Chakra: “Chakra comes from the Sanskrit cakra, which means ‘wheel’, says Koehn. “According to yoga traditions, a chakra is one of seven points in the human body, each responsible for a specific ‘spoke’ of physiological function and emotional experience. Yoga and meditation are a means of keeping all of the body’s chakras unrestricted and open to the circulation of spiritual energy essential for health and emotional well-being.”

Drishti: “Drishti is a Sanskrit word meaning ‘sight’ and refers to the gazing technique practised while holding a yoga pose,” Koehn says. “It can also be used during meditation to improve focus and aid in sense withdrawal. Practising drishti while performing yoga supports and improves the practice while creating self-awareness. It also makes breathing exercises and meditation more productive.”

Midline: This isn’t a Sanskrit word, but yoga and meditation coach Catherine Tingey suggests it as a term to keep in mind – it refers to the invisible centre line of your body.

Namaste: “[This means] my light honours your light, or one soul recognizing another soul, to close a class – sometimes opening a class as well,” says Minos.

Om: “[This is] a sound made at the beginning or end of a class to bring everyone into union,” Minos says.

Pranayama: “The word pranayama traditionally means breath control, or life force (which also relates back to breath control),” says Parets. “There are many pranayama techniques in yoga but when mentioned in a yoga class, pranayama is simply a chosen breathing technique, such as [a] three-part breath (breathing into the lower lungs, mid lungs and upper lungs and then exhaling in three equal parts from the top to the bottom. This is also known as dirga breath or belly breathing.).”

Sacrum: Also, not a Sanskrit word, the sacrum refers to the bony broad shield-shaped end of the lumbar spine, attached to the pelvis, Tingey says, and it’s a commonly referenced term in yoga classes.

Savasana: Tingey says this is the most important pose and usually the last in a class. It’s also called corpse pose and is done by lying comfortably on your back with your

limbs spread out a comfortable, easy distance from the midline.

Surya Namaskar: “Surya Namaskar is one of the most important yoga practices,” Koehn says. “It is the set of 12 yoga poses which can be performed while chanting 12 different mantras. Surya Namaskar is sometimes translated as ‘eternal salutations to the sun.’ … Most yoga classes include some aspect of sun salutations, although most don’t include the mantras.”

Ujjayi Breath: “This is the predominant breathing practice in yoga,” says Tingey. It is also called ocean-sounding breath or victorious breath and is done by inhaling and exhaling through the nose with a slightly constricted back of the throat.

There are also numerous yoga poses, or asanas, which of course all have Sanskrit names. You’ll often hear their anglicized names nowadays, but if you’d like to learn about them a bit more, take a look at this list from Minos, which gives the Sanskrit names and English translations/definitions of the poses:

Tadasana: mountain pose, standing on both feet, legs mildly engaged, neutral pelvis and a mild engagement in the low abdominals


Ardha Uttanasana: halfway lift or heart forward with a flat back


Adho Mukha Svanasana: downward facing dog pose, making an inverted "V" with the hands and feet pressing into the earth


Dandasana: staff pose, seated with legs extended and hands pressing into the earth