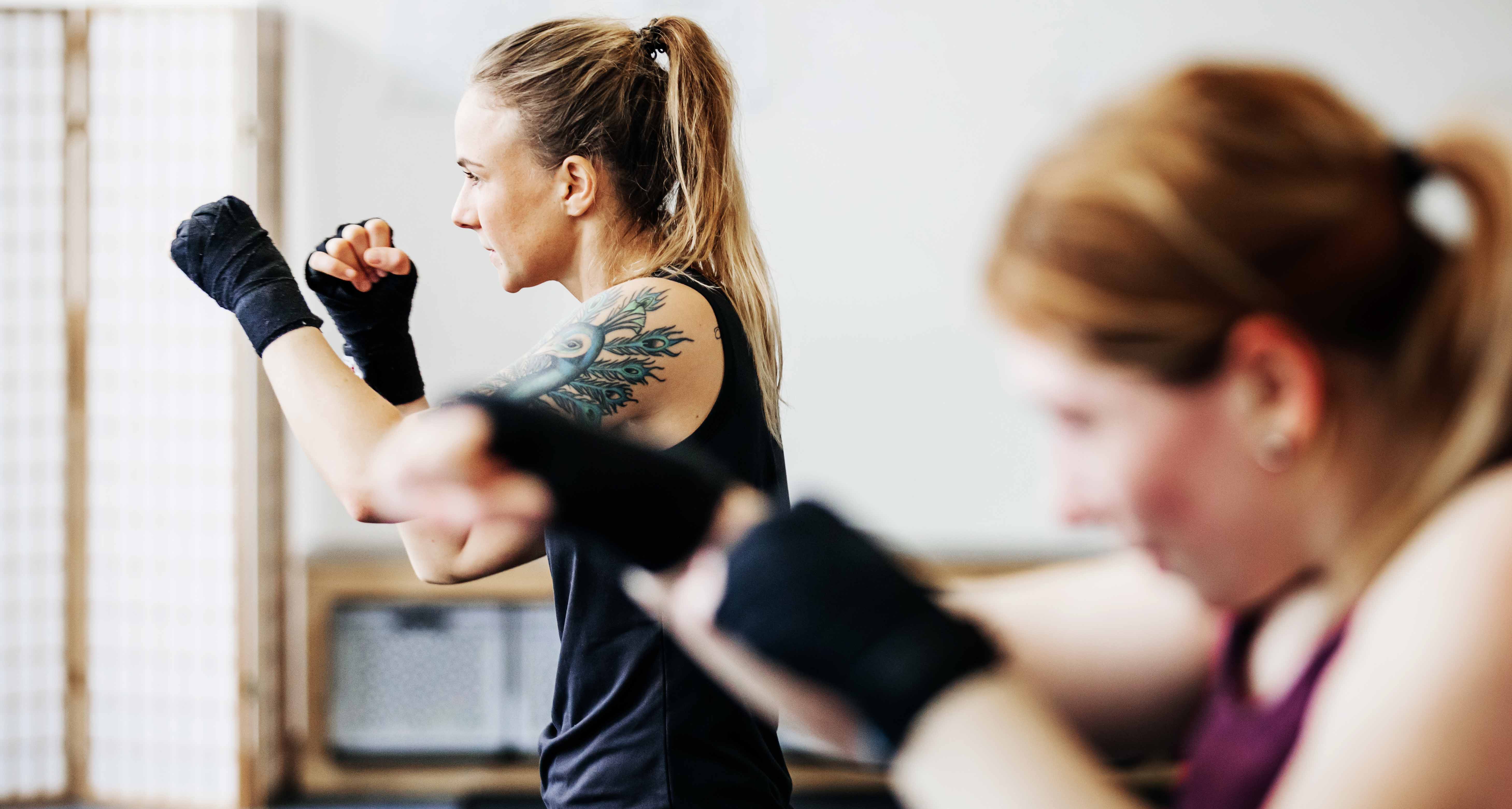 Know before you go: Kickboxing class

Channel your inner fighter (and get a total-body workout) with this high-energy class.
Alyssa Shaffer

If you want a total-body, heart-pumping workout that’s also a pretty fantastic way to get rid of any excess tension or frustration, consider kickboxing. This high-energy routine, a combination of boxing and martial arts, can burn upward of 400 calories an hour while working your arms, chest, shoulders, core, butt, and legs.

But for many, the real appeal comes from learning a new skill — and from the release of being able to throw a solid punch or kick. “It’s a workout that’s suitable for any level because you go at your own pace,” notes Joseph Andreula, CEO of CKO Kickboxing, a nationwide kickboxing specialty chain. Here’s what you should know before you take your first kickboxing class.

Figure out the class that’s right for you.

Kickboxing workouts often, but not always, involve equipment like heavy bags and mitts. “If it’s a bag/mitt class, boxing or MMA gloves are used; if it's a cardio kickboxing class, there’s usually no equipment necessary,” explains Jermaine Bailey, a kickboxing instructor at New York Health & Racquet Club in New York City. Some gyms bring the equipment into the studio or have special areas for kickboxing; others, like CKO, specialize in the sport and have all the equipment on hand. Using a heavy bag can help you burn more calories and get a feel for throwing a punch or kick against impact, but a general cardio kickboxing class can help you learn some of the basic movements if you’d rather take things a little slower.

There are a few standard punches and kicks incorporated into most kickboxing workouts. Punches generally include a jab (straight punch, a cross (across the body), a hook (from one side), and an upper cut (thrown upward). Kicks often include a front kick (kicking straight out with heel), roundhouse kick (pivoting off your bottom foot and extending the top leg in an arc), and side kicks (striking with the outside edge of the foot or heel).

There are also some precautions to help minimize the risk of injury. “Remember to always protect your thumb by rolling the fingers down and wrap the thumb around. Also keep the wrist straight,” says Andreula.  “When kicking, hit the bag or target with the bottom of your foot, the ball of your foot, the instep, or the shin — never your toes — hitting the bag low until your flexibility improves.” And don’t lock out your joints when throwing kicks or punches or overextend your arms or legs, or you’ll risk injury.

If you’re going to be using equipment like heavy bags, you’ll need something to safeguard your hands. You can choose from more traditional boxing gloves, which provide better cushioning but also are a little hotter and often have to be taken off if you’re doing cross-training exercises in the class. They also require hand wraps underneath for comfort and cushioning. Fingerless padded gloves can protect your hands, don’t require additional wraps, and are easy to move around in, but they don’t offer as much padding so you can’t strike as hard, explains Andreula. Some gyms sell this equipment on-site; they get a little sweaty (and stinky!) so gyms may not always loan them out. You may want to call and find out if you are interested in trying out a class.

You don’t really need special footwear for kickboxing. But in general, any kind of cross-training shoe should provide you with the protection and support you need, says Andreula. Wear clothes that you can easily move around in, and which won’t get too weighed down by perspiration.

Kickboxing is a lot of fun, but it’s also definitely a workout. Most classes begin with a warm-up and end with a cool-down, but in between you can expect several rounds of higher-intensity intervals where you’ll be punching, kicking, or doing some combination of each, along with calisthenics like jumping jacks or push-ups or jumping rope intervals.

“You’ll find basic combos like the one-two punch, the jab, the cross, and the front kick, which target the shoulders, triceps, and core, as well as the quads and glutes,” says Bailey. “I’d put the class at about an 8-9 training rate on a scale of 1-10: there’s nonstop punching and kicking to a rhythmic beat.” That said, you can always feel free to move at your own intensity level and take breaks whenever you need them. “Work at your own pace and be patient. It takes time, and the more you work at it, the better you'll become physically and mentally.”

Soreness the next day.

Whenever you perform a new exercise you’re likely to feel it in your muscles about 24 hours later, and kickboxing is no exception. “Drink a lot of water and stretch out after class to help minimize soreness,” says Andreula. The good news is the more kickboxing you do, the stronger you’ll get, and the easier it will feel.