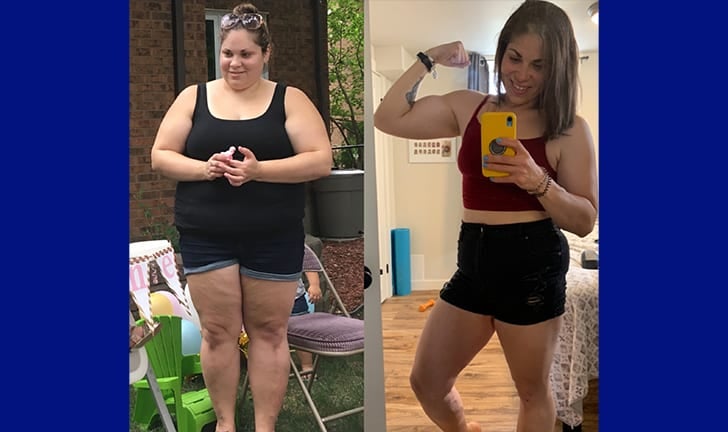 In January 2019, Jessica set a New Year’s resolution: Sign up with WW.

Her determination came after a lifetime struggle with an eating disorder. After having her second child in October 2018, she had reached her highest weight of 275 pounds.

“I found myself just spending my days, sitting on the couch, the laziest I had ever been in my life, feeling completely miserable and just unhappy with where I was. I had these two young kids that I knew I was gonna be chasing around in no time, and no energy to do that. I wanted to be the best mom possible and I wanted to keep up with them.”

Those feelings pushed her to take action.

“It hit me that I needed to make a change. I wanted to be the happiest, healthiest, best me possible.”

She knew of WW because her mother had used it, and she’d even loosely followed the program with her mother when she was a kid.

But a lot has changed about WW since then.

Jessica, who’s been on Blue since day one, says the WW app has been key to her success. “It’s just so easy,” she says. She loves using the barcode scanner in the grocery store and the What’s in Your Fridge feature because “I hate wasting food.”

For the first year of her WW journey, Jessica focused on food and habits. She set small attainable goals, focusing on losing five pounds at a time, and she celebrated every little win.

“I really focused on changing my habits and forming healthy relationships with food.”

In 2020, when the pandemic hit, Jessica began adding in activity, specifically running – something she never thought she’d be able to do. She used the Couch to 5K app to give her a plan to follow, and now runs 5Ks consistently. This spring, she signed up for a 10K.

For anyone struggling to hit the 5K mark, Jessica suggests sticking with it and listening to your body. “There’s no timeline. If you’re moving your body, that’s great.”

“I absolutely love running,” she says now. She’s hit her weight loss goal and reached lifetime and is continuing to set new goals – like the 10K – to keep herself focused.

Patience, consistency and focusing on what she can control have been crucial, especially over this last year.

Jessica keeps herself motivated with side-by-side photos and seeing her progress over time.

And she encourages others to look at the whole picture along their own journeys.

Don’t focus on the scale, she says. “That can be incredibly overwhelming.”

And, she adds, remember that bodies are weird – fluctuations are normal. And a positive mindset will go a long way.

But perhaps the most important takeaway? These journeys are about much more than weight loss. Jessica says she’s gained more than she’s lost in many ways.

“There is so much more. Yes it’s important to celebrate every pound you lose because that’s amazing, but there’s just an entire world of things that you’re going to gain throughout the journey.”

She says she is much more confident now (she’s partial to crop tops and bikinis) and she’s got lots of energy.

“I’ve never felt more confident in my life,” says Jessica, adding that people who know her know that she’s always moving around and findings things to do.

She’s also gained a supportive community of “people who get it” through WW and social media.

And, perhaps the best part, she says she’s demonstrating a healthy lifestyle for her children, and feels she is setting them up for success.

“It’s been huge for me that I have gained this healthy lifestyle that I’m living and I get to pass that on to my kids.”