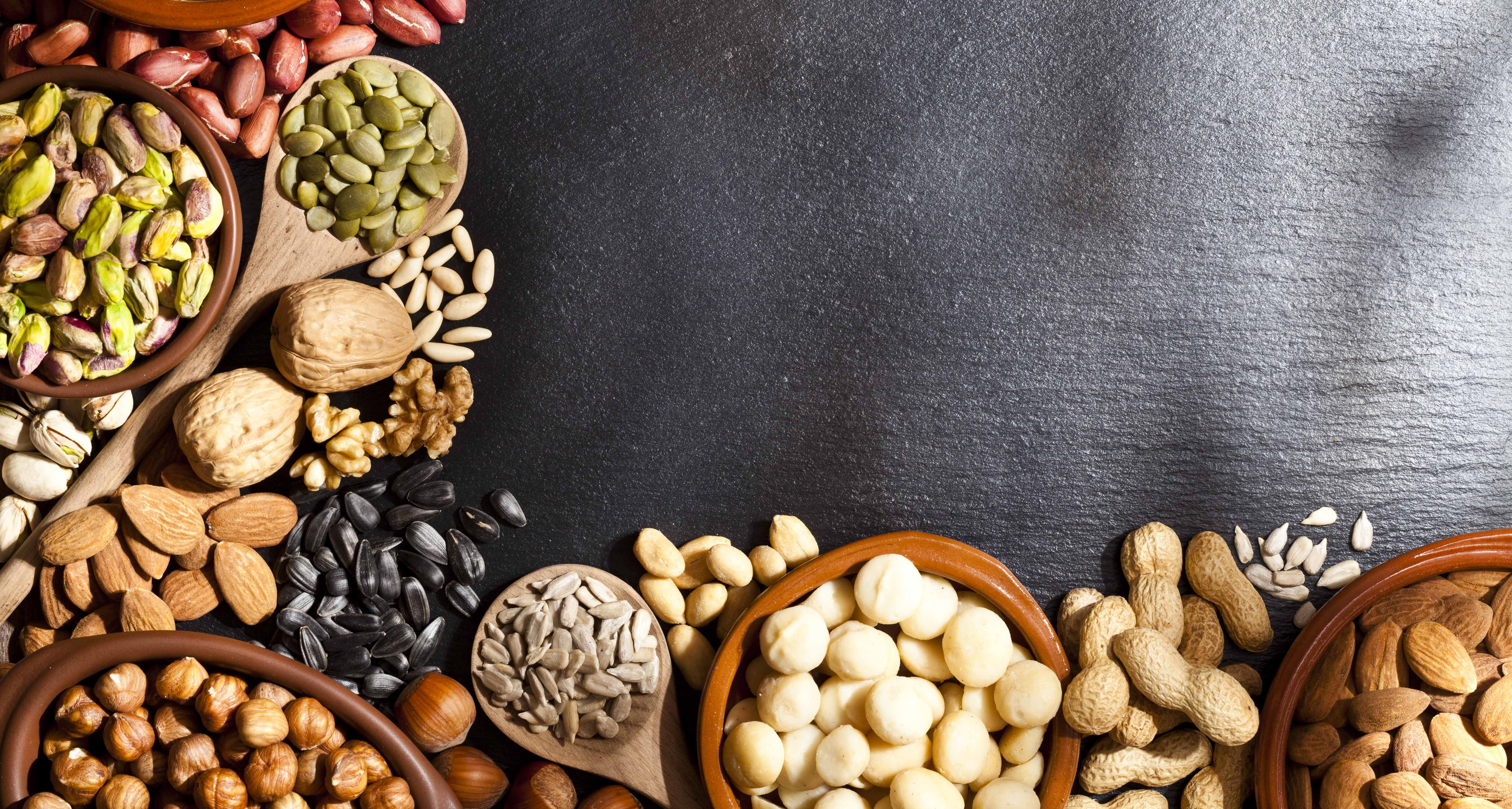 Five Nuts You Need To Know About

Full of nutrition and flavour, try incorporating these nuts into your menu today!
Ashley Linkletter

Nuts are an energy-dense and nutritionally beneficial (not to mention delicious!) part of a healthy diet. Sticking to one ounce serving sizes means that you’ll not only satisfy your cravings for nuts without putting a dent in your daily eating plan but you’ll also potentially be consuming plenty of nutrients such as manganese, copper, magnesium, and omega-3 fatty acids. If you plan on buying nuts in bulk keep them in the freezer until you’re ready to use them. This will ensure freshness and prevent the nuts from going rancid. So head to your closest grocery or bulk foods store and go nuts for these amazing nuts!

There’s a good reason why almonds are such a favourite amongst Canadian snackers, their subtly sweet flavour complements almost any food that they’re paired with. Almonds are harvested in warm climate from the fruit of almond trees and are actually a mature seed. Most of the almonds eaten in Canada are exported out of California, although there are some Canadian farms attempting to grow almonds in our cooler climate. Almonds can be enjoyed raw or dry roasted, as a tasty nut butter spread or ground up into almond meal to be used in marzipan and cakes. A single ounce of almonds (or approximately 22 almonds) contains an impressive amount of protein, vitamin E, and manganese as well as enough fat to keep you feeling satisfied long after you’ve eaten.

Mildly flavoured and a true kitchen-chameleon, cashews are the hanging seeds of cashew apples that grow from cashew trees, an evergreen tree that grows mainly in tropical climates. Cashews make great snacks when eaten either raw or dry roasted, but they can also be soaked in water and then puréed to make cashew milk, sour cream, cheese or any other vegan version of a creamy sauce. Cashews are also a staple in many Indian curries, where they are ground up to add a silken texture to sauces while in Thai and Chinese cuisines cashews are used whole or crushed into smaller pieces. An ounce of raw cashews is rich in copper, magnesium, antioxidants and omega-3 fatty acids.

Walnuts have a slightly bitter yet sweet taste that is absolutely delicious any time of the year (whether there’s a nutcracker in sight or not). Walnuts are the seeds from any member of the Juglan category of tree. Walnuts have recently been advertised as a heart-healthy addition to any diet, and although clinical trials are starting to look promising scientists are still struggling to draw a definitive conclusion in this area of study. Walnuts can be eaten raw or toasted, just make sure when toasting to keep the heat under 350 degrees and the time under 10 minutes to prevent accidentally destroying the high levels of omega-3 fatty acids found in walnuts. Grind up walnuts to add to pasta dishes and to coat chicken breasts, add them to salads or sprinkle on top of yogourt and fruit.

No, not technically a nut but a legume, peanuts have earned an honourary place among their nutty peers. Peanuts are seeds that grow in warm climates just like other nuts, but the difference lies in the fact that they grow underground instead of hanging from a tree. Peanuts can be eaten directly from the shell, roasted, boiled, ground into nut butter or made into a dense flour. Peanuts are a staple in many cuisines from around the world, including Thai, Mexican, Peruvian, Chinese, and North African dishes. High in manganese and with a modest amount of omega-3 fatty acids, peanuts can be added to homemade trail mix, granola bars, coconut curries, and hummus.

With their sweet and buttery flavour, pecans have become famous as the main ingredient in pies, brittles, and praline. Pecans are grown from hickory trees that produce fruit containing the pecan seed, which is harvested as the mahogany-brown nut everyone is so fond of. Pecans are largely harvested from trees in the southern United States but had been eaten by indigenous peoples of the area long before settlers first arrived. One ounce of pecans provides more than half of your RDA of manganese as well as being a good source of omega-3 fatty acids. Pecans can be eaten raw or tossed with spices and dried herbs before being roasted at a low temperature.