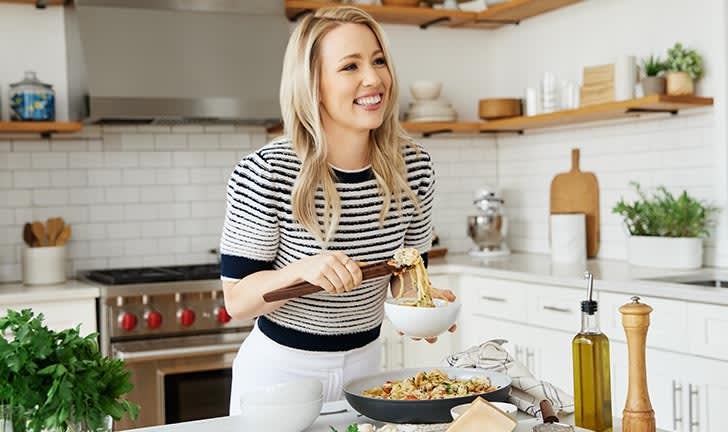 Everything you need to know about eating for satiety

Learn how to make any meal or snack more satisfying—and get those stomach grumbles to quiet down.
Rita Colorito

Ever notice that certain meals and snacks can keep you full for what seems like forever, while others leave you feeling hungry again (and scrounging for something else to nibble on) within the hour? Turns out, there’s more to feeling satisfied than the mere size of your servings. The nutritional makeup of what you eat is also a major determinant of satiety, a.k.a. that contented feeling of fullness you get afterward.

Specifically, we’re talking about the power of protein and fibre, two good-for-you nutrients shown to help people stay fuller longer. Feeling satisfied between meals may be one way to support success on your weight and wellness journey, says Heather Leidy, PhD, an associate professor at the University of Texas at Austin who specializes in nutrition sciences. Whether you're looking to shed pounds, maintain your weight, or simply fend off a case of the stomach grumbles, here’s how meal composition can make a difference.

How protein fills you up

Among the big three macronutrients, protein takes top honours at promoting satiety. “Protein helps you feel fuller a little bit more than carbohydrates, and quite a bit more than fats,” says Douglas Paddon-Jones, PhD, a distinguished professor of nutrition and metabolism at the University of Texas Medical Branch.

Highlighting one facet of how protein makes meals more satisfying, research suggests that protein-rich foods may reduce the secretion of ghrelin—a hormone that reminds you you're hungry—while increasing circulating levels of hormones that satiate.

Falling short on protein “can make us feel hungrier throughout the day and have more food cravings," Dr. Leidy says. Just note that there’s no one-size-fits-all amount of protein everyone should aim to eat. The current recommended dietary allowance (RDA) for protein is 0.8 grams per kg of bodyweight—just over 7 g of protein per 20 pounds. As an example, a person who weighs 150 pounds would need about 55 g of protein per day to support good health overall. To give you an idea of what that looks like: 1 cup of Greek yogurt has about 23 g of protein, 1 cup of lentils has nearly 27 g, and a 3.5-oz serving of boneless, skinless chicken breast contains 31 g of protein.

How fibre fills you up

Unlike other carbohydrates, fibre doesn’t break down during digestion to provide energy for the body. Instead, this complex carb—found only in plant-based fare—creates filling bulk in our diet and supports a steadier, more sustained release of energy from other food components we eat.

Good sources of fibre include fruits, vegetables, legumes, whole grains and whole-grain foods (like oats or whole wheat pasta). In the latest Dietary Guidelines for Americans, fibre was named among the most under-consumed nutrients in the U.S., with many adults missing the mark on getting the recommended 22–38 g of fibre per day.

People who enjoy plenty of fibre-rich foods in their daily diet tend to have lower body weights than people who consume less of the nutrient. In a small 2015 study that compared higher-fibre oatmeal to lower-fibre corn flakes, volunteers in the oatmeal group described their meal as more satiating. They also ate less at a subsequent meal than volunteers who had munched on cornflakes.

How to boost your intake of fibre and protein

In general, we know that meals and snacks that combine protein and fibre are filling. Still, since, everyone’s body is different, there’s no universal magic formula for whipping up a filling meal or snack. WW recipe developer Leslie Fink, MS, RD, encourages sampling different ideas and combos to figure out which feel most satisfying to you. Here are some of her faves:

(Hint: Quinoa, beans, and nuts are your power foods on this front!)

Other factors that influence satiety

Smoothie fans, this note is for you: As filling as whole fruits and vegetables can be, the situation changes a bit once you blend them into beverage form. Research shows that liquids don’t promote the same feeling of fullness as solid foods do, as eliminating the act of chewing may affect signaling between the belly and brain. “Any food in solid form is a little more satiating than the same total amount in liquid form," Dr. Paddon-Jones says. So while smoothies and juices can be a delicious and nutritious part of your diet, just note that sipping produce through a straw might not quell your appetite as well as, say, crunching on a juicy apple would.

Your presence of mind can affect how satisfying a meal feels, as well, Dr. Leidy says. Mindful eating, or being fully present during a meal or snack, can encourage people to appreciate a food’s presentation, flavour, aroma, and mouthfeel. Compared with people who eat while distracted, people who eat more mindfully tend to have a better sense of how much they’ve eaten and eat less overall.

Remember that we eat for all sorts of reasons, not just because we might be physically hungry. Sometimes the urge to eat is influenced by factors such as emotions, or sights and smells of delicious things in our midst (hello, plate of cookies in the workplace break room). “While satiety can help curb appetite and increase one’s ability to adhere to an eating pattern, we need to be mindful of our hunger and satiety cues,” Dr. Leidy says. In other words, think of protein and fibre as two more things in your toolkit for working toward your overall wellness goals.