What is Canadian cuisine? Chef Michael Smith helps us discover what it means to cook like a Canuck.
By Sam Stilson

Poutine. It’s a deliciously decadent mess of fries, cheese curds and gravy. It’s also often the first thing that comes to mind when we hear the term ‘Canadian food’. But is that fair? Can our national cuisine really be reduced to a sloppy bowl of carbs, as delightful as it may be? Is this what Canadian food is all about?

“We are a great big, giant mosaic, and that’s reflected in our cuisine. Our food varies from region to region, just like it does in Europe or China or India. We’re a giant country and we have our own individual cuisines all across the country. We get to weave into that mix all of the incredible ethnic influences that makes us the greatest, most inclusive country in the world.”

Having been a stalwart of the Canadian food scene for decades either as an ever-present friendly face on Food Network Canada, popping up at food events across the country or running his incredible farm-to-table restaurant, Inn at Bay Fortune, Michael Smith has seen it all when it comes to Canadian cooking. While classic comfort dishes are the foundation of Canadian cuisine, Smith is seeing a big change in the way we’re approaching cooking.

“We have a generation of Canadian chefs now that are confident. I think in effect, that confidence is breeding micro-cuisines across the country. We’re seeing our chefs look around at different ingredients, different techniques and take pride in what they have. A good example would be Newfoundland. It might be the last place on the planet where you’d expect to see a strong indigenous cooking culture emerge but that’s exactly what’s happening there,” Chef Smith says.

This emboldened attitude isn’t just reserved for ingredient selection; Canadian chefs are beginning to get vocal about our cuisine and what we offer on a global stage.

“We now have the confidence to say “We’re enough. We’re just as good as anybody else in the world.” We’re a humble people, it’s been endemic in our culture and we’re seeing that fade away in terms of our chefs, our cuisine and our food culture across the board. Whether it’s the folks gathering, preparing or sharing the food, we’re standing up and saying, “We are awesome!””

As Canadian cuisine has grown over the years in sophistication and technique, there’s also been a movement towards using local, native ingredients. We’re becoming more aware of the fantastic produce that comes out of our own country. Where once you’d be hard-pressed to find elk or Saskatoon berries on a restaurant menu, we’re now seeing our nation’s palate expanding.

“For me it’s foraged food,” says Chef Michael Smith, when asked what food trends are starting to take hold. “Here we are in spring, early summer, and we’re working our way through fiddleheads, cattails, stinging nettle, dandelion greens and fireweed shoots. These are all things that we’re foraging right now on Prince Edward Island.”

For those of us who think a fiddlehead is the top end of a violin, there’s plenty of other ways to eat Canadian produce without having to get too adventurous.

“Eat lentils,” says Chef Smith. “Lentils are an amazing crop; they’re crazy healthy, they’re awesome for the environment, awesome for our farmers. They’re easy to prepare, they’re inexpensive. We grow the world’s lentils. It’s a massive agricultural crop out in the Prairies that is doing extremely well.”

You can also fill your plate with local ingredients by shopping at your local farmers’ market or CSA (community supported agriculture) farm. By eating locally grown ingredients you’ll be helping your community, easing the burden on our environment and enjoying fresher, tastier meals.

“Eat whatever’s around you,” Chef Smith advises. “Get in touch with the seasons in your community. Embrace them.”

With so much to celebrate about our nation’s cuisine, Canadians can look forward to increasingly sophisticated and sustainable meals both at home and in restaurants. But what of the humble poutine? Are classic Canadian comforts like tourtière and butter tarts becoming dishes of the past? Not according to Chef Smith.

“I think one of the most fascinating things we’ve seen in the world of food in the last five to ten years is the idea that there’s integrity in comfort food. That you don’t have to be a high-end fine dining chef to have any kind of influence or integrity,” he says. “Awesome BBQ or beautiful cheeseburgers, fish tacos, rice and daal, all these simple dishes can have integrity. The ingredients can be sourced impeccably and the art of the craft can be applied to them.”

In other words, poutine isn’t going anywhere; it’s just going to get better.

So if you’re looking to ‘cook Canadian’ this July 1st, you needn’t look further than the ingredients on your plate and the people around your table to produce a truly great Canadian feast.  Or take a cue from Chef Michael Smith and cook his favourite Canadian classic, chowder.

“It’s not just packed with local ingredients; it’s also packed with tradition. It speaks to so many things here in the Maritimes. Just the simplicity of it. The idea that chowder was something you had to be able to make when you saw the boat round the head, heading into the port. By the time buddy jumped off that boat, walked up the hill to his house, chowder was on the table waiting,” he says wistfully. “It’s a simple dish that uses what’s on hand, not something complicated. And it’s something that today we’re proud of.” 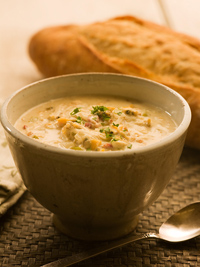 If you like, this chowder can be made a day or two in advance and then reheated. Its flavour actually gets better when it rests overnight.

Variation
For a distinctive flavour, try adding a spoonful or two of horseradish to the chowder. For a luxurious special-occasion treat, add lots of smoked salmon. You may also try stirring in one of your favourite fresh herbs at the last second. Dill and tarragon are traditional, as are green onions. You may also stir in chunks of any fish you like, even canned tuna fish.