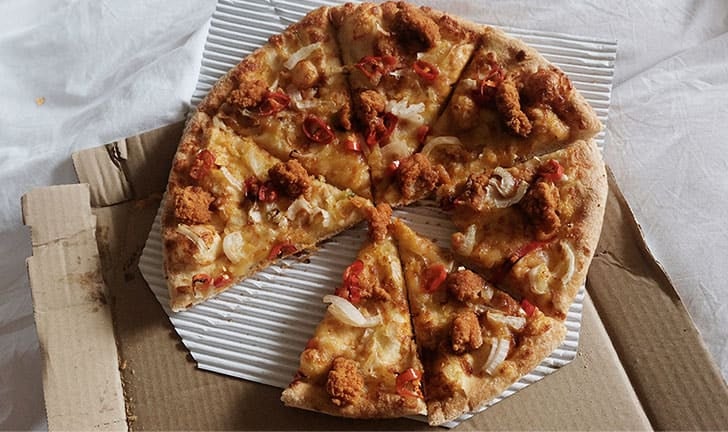 Eating before bed: Is it really that bad?

Is it what you eat or when you eat? Read on to find out if late-night eating can affect your weight.
Maressa Brown

Popular wisdom has long held that bedtime meals and snacks are a bad idea for anyone hoping to lose weight. You may have even heard the old expression preaching tiny portion sizes at night: “Eat breakfast like a king, lunch like a prince, and dinner like a pauper.” The assumption is that calories we consume just prior to sleep aren’t used as efficiently as the calories we eat and drink during our active waking hours. But does modern science support the theory that late-night eating leads to weight gain?

Not really—at least, not so far. At the moment, researchers are still working to figure out exactly how a gooey slice of pizza might affect the body differently at midnight versus 6 p.m. The field known as chrononutrition has gained steam in recent years as researchers explore the potential impacts of meal timing on weight and metabolism more fully. “[People] do appear to have biological rhythms that influence when we can more efficiently metabolize foods,” Maggie Moon, a registered dietician based in Los Angeles, says of the current findings.

Keep reading for a closer look at what science has to say about the effects of late-night eating on weight, metabolism, and more.

Can eating just before bed lead to weight gain?

At this point, there’s not much evidence to support the idea that bedtime noshing causes weight gain through timing alone. Still, some recent studies point to an association between following a “delayed eating pattern”—consuming the majority of calories later in the day—and carrying extra pounds.

For instance, in a 2019 study published in the journal Nutrients, volunteers who regularly consumed a major share of their daily calories within two hours of bedtime were more likely to meet the criteria for obesity than people who did most of their eating earlier in the day.

This finding follows research showing that the thermic effect of food—that is, the energy the body burns in digesting, absorbing, and transporting dietary nutrients—may be lower for some people in the evening, which raises the possibility (but again, doesn't prove) that late-night calories are more likely to be stored as fat.

Eating meals late at night may come with a heightened susceptibility to overeating, other research suggests. A 2013 study of 52 adults published in the journal Appetite found that subjects who ate past 8 p.m. consumed more total calories than those who ate earlier in the day, leading researchers to conclude that a delayed eating pattern could contribute to weight gain over time. But since that study lasted just seven days, the actual long-term effects weren’t observed.

The body’s circadian timekeeping mechanisms—the 24-hour “clocks” that govern many of our physiological processes—may partly explain some of the effects described above. “The clocks regulate metabolism by managing when and at what level things like enzymes, hormones, and metabolic processes should be activated,” Moon explains.

The 2019 Nutrients study cited above suggests that melatonin—a sleep-signaling hormone that kicks into gear as daylight fades—may affect carbohydrate metabolism in a way that could promote higher body weight among late-night eaters.

Melatonin was also implicated in a 2017 paper published in the American Journal of Clinical Nutrition. In that study, researchers tracked the everyday eating patterns of 110 young adults, along with the volunteers’ melatonin levels. Subjects who ate most of their calories after nighttime melatonin onset had significantly higher body fat.

In a small preliminary study of eight adults conducted at the University of Pennsylvania, subjects burned less body fat when they shifted their daily eating window by four hours, from 8 a.m.–7 p.m. to noon–11 p.m. While acknowledging that more research is needed, the authors theorized that circadian factors might play a role.

Authors of a small 2014 study concluded that “chronically eating at a later time of day may create metabolic disturbances of a larger magnitude.” They evaluated 32 women and found that those who ate their largest meal of the day at 4:30 p.m. versus 1 p.m. used less energy at rest and had higher levels of the stress hormone cortisol, both of which could theoretically affect weight regulation.

That remains to be seen. Research has not yielded a straightforward formula for determining the metabolic effects of eating at any specific time of day, including bedtime. That said, given the emerging research suggesting that routinely eating just before sleep is correlated with higher body weight and greater calorie intake, you may want to enjoy your final meal of the day four to six hours prior to bedtime if those matters are of concern to you, Moon says.

Some days, your schedule may necessitate later eating. If you feel ravenous late at night, it’s generally better to eat something than try to sleep with your stomach grumbling, says Melissa Majumdar, an Atlanta-based registered dietitian, certified specialist in obesity and weight management, and spokesperson for the Academy of Nutrition and Dietetics. “Going to bed hungry can influence quality of sleep and thus impact stress hormones, blood sugar control, and hunger the next day,” Majumdar says.

If bedtime hunger is a recurring nuisance for you, you might want to ponder your overall eating habits and look for ways to boost your satiety throughout the day, Majumdar says. “For example, if breakfast is low or void of protein, [you might] plug in some Greek yogurt or an egg to increase fullness, which can help impact hunger throughout the day,” she notes. Other nutritious foods that may help you feel full include beans, non-starchy veggies, and broth-based soup.

In addition to the possibility of unwanted impacts on metabolism and calorie intake, going to bed on a full stomach could set off digestive ailments such as acid reflux or GERD. That’s because lying down diminishes the role that gravity would normally play in digestion, Majumdar explains. As a result, stomach contents may stick around longer—and come back up more easily. The feelings of heartburn that follow can disrupt sleep, impacting appetite and food choices the following day.

Best and worst foods to eat before bed

Foods to eat before bed: Again, there’s probably no harm in nibbling a bedtime snack if you find yourself feeling hungry late at night. Just as you would at other times, aim for a bite that emphasizes whole ingredients and delivers some combo of complex carbs for sustained energy, along with lean protein or some healthy fat to satisfy you, Majumdar suggests. Here are a few quick late-night snacks she likes:

Foods to avoid before bed: Try to keep your bedtime-adjacent hours free of foods and drinks that could mess with your sleep, Majumdar says. Everyone’s different, but common sleep disruptors include coffee and other caffeinated beverages, as well as alcohol. Foods that cause heartburn in some people include spicy foods, chocolate, and high-fat foods.

The upshot: Is it what you eat or when you eat?

Some research has shown that people who eat late at night tend to consume more calories per sitting than people who eat earlier in the day, a pattern that could conceivably add pounds over time. In addition, some people who eat right before bed may experience digestive complaints like heartburn, which could affect weight management by interfering with sleep.

Your food choices themselves—along with your level of physical activity, approach to coping with stress, and more—are all important factors in managing weight. An occasional bedtime snack probably won’t make or break your wellness journey.

Maressa Brown is a writer and editor in Los Angeles specializing in health and lifestyle topics. She’s written for Shape, InStyle, Parents, The Washington Post, Cosmopolitan, Better Homes and Gardens, and Women’s Health, among other outlets.