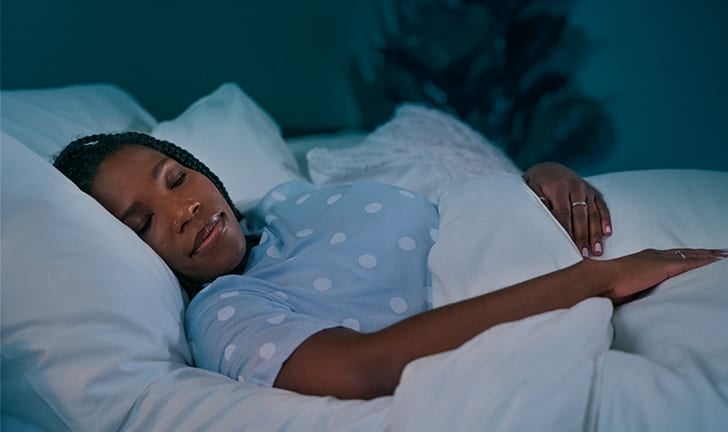 A deep dive into sleep apnea

Sleep apnea is probably more common than you think. Read on to learn more about this condition, how it impacts your body and lifestyle, and ways to manage if you are affected by sleep apnea.
Michelle Latinsky, RD

All about sleep apnea

Sleep apnea is a sleep-related breathing disorder that causes repeated interruption of breathing during sleep. The continuous cycle of stopping and starting of breathing can disrupt normal sleep patterns, because the sleeper must awaken briefly after each episode to resume breathing. It also affects the brain and body’s ability to get sufficient oxygen throughout the night, which can have numerous impacts on health.

There are two main types of sleep apnea. The most common type is obstructive sleep apnea, which is caused by the muscles of the throat intermittently relaxing during sleep and blocking the airway. With central sleep apnea, the airway does not physically become blocked, but the brain fails to signal to the body to breathe.

Approximately 6.4 percent of adults in Canada reported being told by a healthcare professional that they had sleep apnea. However, the prevalence may be higher than that, given that many cases go undiagnosed.

Risk factors for sleep apnea include:

How to tell if you have sleep apnea

If you’ve been told you snore loudly and often feel tired even after a full night’s sleep, it is possible you have sleep apnea. The repeated cycles of brief awakenings to restore breathing and normal oxygen levels interrupt the various stages of sleep needed to feel refreshed and well-rested in the morning.

Not everyone who snores has sleep apnea, but it is a common symptom to appear with this condition. In mild cases of sleep apnea, excessive daytime sleepiness is one of the most telltale signs. Other symptoms include waking up frequently throughout the night without knowing why, and you may suffer from headaches in the morning. The lack of good quality sleep can impair cognitive function, resulting in symptoms such as memory loss and poor concentration. Mood changes, such as irritability, are common.

In more severe cases of sleep apnea, you may wake up breathless and gasping for air. Your bed partner or someone you live with may report that there are episodes in which you stop breathing during sleep.

The impact of sleep apnea on your body and lifestyle

If left untreated, sleep apnea can have numerous effects on the health of your body and overall lifestyle.

In the short term, daytime fatigue due to lack of restorative sleep is linked to a higher risk of motor vehicle accidents, work-related accidents and injuries, and difficulty concentrating or poor performance at work. Snoring can impact your bed partner and anyone who sleeps in close proximity to your bedroom; if the snoring is loud enough, they too can be deprived of quality sleep, or forced to sleep in another room.

Over the long term, sleep apnea increases your risk for a range of health conditions, including high blood pressure, heart attack, stroke, type 2 diabetes, liver problems, and depression. The frequent episodes of dropping blood oxygen levels that occur while sleeping lead to an increase in blood pressure, strain the cardiovascular system, and can cause an abnormal heartbeat.

What to do if you have sleep apnea

If you suffer from any symptoms of sleep apnea, it is important to let your healthcare professional know. A diagnosis of sleep apnea can be easy to miss, but it can have significant long-term impacts on your health.

The primary treatment option for sleep apnea is a breathing device called Continuous Positive Airway Pressure (CPAP). This is a type of mask worn while sleeping that provides pressurized air to prevent collapse of the upper airway.

However, lifestyle modifications also form an important part of a sleep apnea treatment plan. Since being overweight or obese is a key factor in obstructive sleep apnea, weight loss efforts can have a significant and positive impact in helping to keep the airways open during sleep.

Avoid smoking and alcohol if you suffer from sleep apnea. Alcohol use relaxes the muscles of the throat, which can impact breathing and disrupt your sleep cycles. Smoking increases both inflammation and swelling in the airways, which can also worsen symptoms of sleep apnea.

Lifestyle modifications can play an important role in managing symptoms of sleep apnea. However, in some cases medication and surgery may be necessary. Consult your healthcare professional to ensure you have a comprehensive treatment plan in place to manage your sleep apnea.