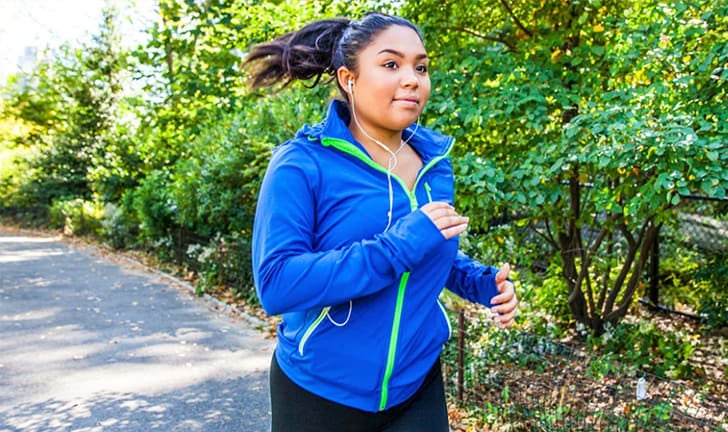 Read on for the science-backed scoop on different types of belly fat, what they mean (and don’t mean!) for health, and simple things you can do to reduce belly fat and support your wellness goals.
Barbara Brody

Rest assured, we’re not about to send you sweating through a million sit-ups. You won’t find any false promises about scoring six-pack abs in time for beach season. We’re actually here to talk about a form of belly fat you can’t even see: visceral fat, the kind that nestles deep within the abdomen and is associated with an increased likelihood of developing certain health conditions. What does visceral fat mean for the body, exactly—and what can you do to reduce it? Read on for expert answers to all your burning questions about this common form of belly fat.

What are the types of belly fat?

As implied above, belly fat comes in a couple of forms: subcutaneous and visceral. “Subcutaneous fat is the ‘pinchable’ kind that sits between your skin and [abdominal] muscles,” says Amy Kimberlain, a Miami-based registered dietician nutritionist and spokesperson for the Academy of Nutrition and Dietetics. (The fat you can see and feel in other parts of your body—like your thighs—is subcutaneous, as well.) Subcutaneous fat stores energy, cushions muscles and bones, and insulates the body from cold.

Visceral fat, on the other hand, lies inside the abdomen—it’s not visible from the outside, and you can’t pinch it. Anatomically speaking, it helps create cushioned space between the pancreas, liver, stomach, and intestines. In excess amounts, however, visceral fat is associated with an increased risk of developing certain health conditions.

How does visceral fat affect health?

While all fat produces hormones and other molecules, research shows that visceral fat is unique in producing a hormone that stokes inflammation. An inflammatory response starts when the immune system registers something as a threat, setting into motion a group of processes the body typically uses to combat an infection or heal an injury. Chronic inflammation may increase triglycerides, a type of fat found in blood, making a person more likely to experience a heart attack or stroke, says endocrinologist Robert Eckel, MD, a professor at the University of Colorado’s School of Medicine in Denver. Visceral fat also secretes a protein that heightens the body’s resistance to the hormone insulin, which can lead to type 2 diabetes over time. People with high levels of visceral fat have a greater likelihood of developing cancers of the breast and prostate, as well.

Multiple factors may play into the amount of visceral fat a person has in their body. One is having a higher body weight in general—this can indicate that a person is carrying excess fat overall, including deep in the belly. That being said, note that people with smaller body weights can have high levels of visceral fat, too, according to a study published in the European Journal of Preventive Cardiology. Research suggests that some people may inherit a predisposition for carrying more fat in the abdomen. Lifestyle factors—including diet, sleep, and stress—may also influence levels of visceral fat.

How is visceral fat measured?

The most accurate way to measure visceral fat would be to undergo an imaging process like a CT scan or an MRI, but those tests are expensive and generally unnecessary, Kimberlain says. Instead, most medical practitioners rely on a simple waist measurement. While this old-school technique doesn’t differentiate between subcutaneous and visceral fat, or pinpoint the exact amount of visceral fat a person is carrying, most health experts consider it a reliable indicator of a person’s general status, Kimberlain says. (Bonus: Unlike diagnostic imaging, it’s also possible to DIY.) According to the National Institutes for Health, a waist measurement taken at belly-button level that is greater than 35 inches for women and 40 inches for men indicates a high level of visceral fat.

How do you reduce visceral fat?

The research on visceral fat may sound daunting—even a little scary—but it’s not all discouraging. In studying the issue, experts have also uncovered some simple measures people can take to reduce visceral fat and improve health, says Tammy Lakatos Shames, a registered dietician nutritionist and co-owner of The Nutrition Twins. It’s also worth noting that these strategies can support healthy weight management, too! Here’s a closer look at some measures you might consider trying.

1. Move in a way that works for you

Whether you like your cardio workouts quick and super sweaty, or longer and a little less intense, pretty much any regular activity that gets your heart pumping can help keep visceral fat in check, a small 2015 study concluded. This builds on a major 2012 research review linking aerobic activity in general to lower amounts of visceral fat.

Resistance training can be helpful, too, Lakatos Shames adds. “Strength training builds lean muscle tissue, which will increase your metabolic rate so you burn more calories,” she explains.

Of course, getting rid of belly fat might not be your only workout goal. If you’re just starting out, take a few moments to figure out how much and what kind of exercise makes sense in the context of your life.

2. Fill up on protein

Enjoying lean sources of protein such as fish, poultry, and beans may have a beneficial effect on visceral fat. An analysis of nearly 24,000 adults published in The Journal of Nutrition found that those whose diets were high in protein had significantly less visceral fat (and lower body mass indexes) than those who simply hit the recommended daily allowance (RDA) for the nutrient. One possible reason is that protein reduces a hunger hormone called ghrelin and increases satiety hormones, Lakatos Shames says, a dual effect that may reduce overall calorie intake. Protein is also key for building that lean muscle mass we just mentioned.

The RDA for protein—in other words, the amount needed for basic human functioning—is 0.8 g per kg of bodyweight. In the study above, high-protein diets were defined as 1.0 to 1.5 g of protein per kilogram. For a 165-pound person, that would shake out to 45 to 67 g of protein a day—about what you’d get in two large eggs (12 g); ½ cup of cooked lentils (9 g); and one skinless chicken breast (26 g). Just note that it’s advisable to consult a registered dietician or doctor before making any big changes to the nutrient balance of your diet, especially if you are living with a health condition.

3. Go easy on soda and alcohol

In some cases, belly fat may be a reflection of beverage intake. In one long-term study of more than 1,000 adults, published in Circulation, those who sipped sugar-sweetened soft drinks every day had significantly more visceral fat after six years than adults who rarely or never drank sugary soda. To get the sweet and bubbly combo sans sugar, try sparkling water infused with fresh fruit.

Wine, beer, and cocktails are drinks to consider, as well—particularly in how they are consumed, research suggests. In a study of drinking patterns among more than 2,300 adults, moderate drinkers who sipped four alcoholic drinks within a single day per week were more likely to have excess abdominal fat than people who spread an equal number of drinks over several days. Looking to dial back on drinking? Experts tell WW it can help to figure out ahead of time when and how much you’ll imbibe—and let your loved ones in on the plan, if possible. Then, sip mindfully and be in the moment.

It’s generally simple enough to bounce back from a single night of staying up to too late or tossing and turning. But things get tricky when sleep deprivation becomes a pattern, Lakatos Shames says. A sample of 400 women analyzed in the Archives of Internal Medicine found that subjects who tended to sleep for six or fewer hours per night were significantly more likely to have large waist measurements than those who logged more hours of snooze time.

While there’s no magic number that equals a perfect night’s sleep for everyone, most adults need 7 to 9 hours per night to function at their best. Overcoming sleep obstacles sometimes takes a bit of trial and error. A few general practices shown to be useful include establishing a consistent bedtime, winding down with a relaxing activity 30 to 60 minutes before hitting the hay, and keeping eyeballs away from digital devices after lights out.

Stress affects everyone differently, and for some people, the body may respond in a way that adds to visceral fat stores. Research has uncovered a connection between higher levels of the stress hormone cortisol and larger waist circumference. Stress may also affect eating patterns in ways that promote weight gain.

For most of us, effectively managing stress requires more than just taking a deep breath or two. Some potentially useful steps for coping include recognizing patterns of stress, establishing calming routines, and speaking to yourself in ways that empower—not overwhelm—you.

For many people, simple lifestyle adjustments—including getting more physical activity, facilitating better sleep, and figuring out healthy ways to cope with stress—can help reduce visceral fat deep within the abdomen. Reducing this form of belly fat is linked with a lower likelihood of developing cardiovascular disease, type 2 diabetes, and other health concerns down the line. These measures can also help you feel your best on a more everyday level—a win-win for health.

Barbara Brody is a freelance writer who specializes in health and wellness. Her work has appeared in many outlets, including WebMD, Health, and Prevention.