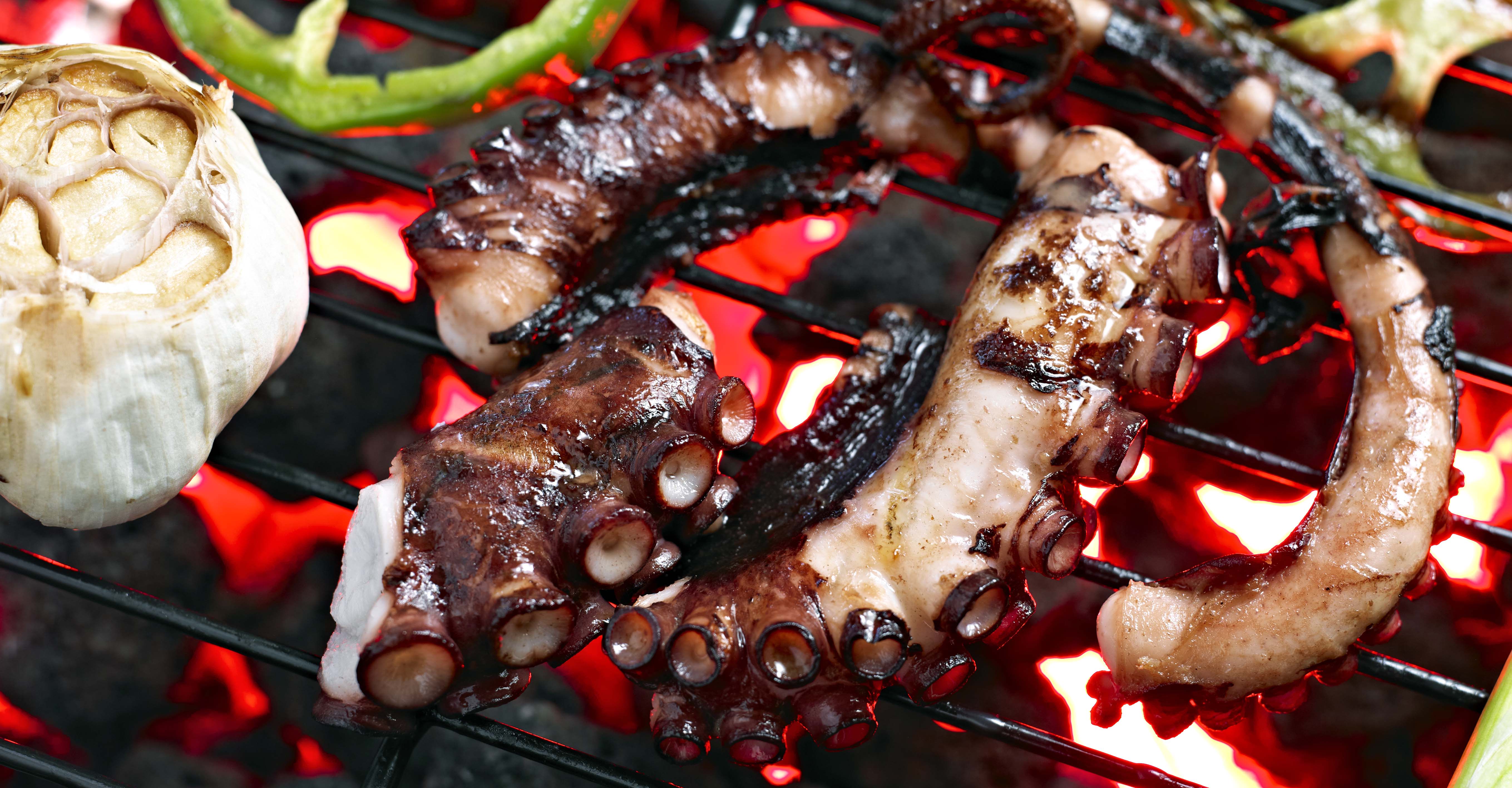 7 Foods That Will Liven Up Your Grill

Grilling should be fun, a break from the ordinary. So forget the old standbys and use these fresh ideas.
By Bruce Weinstein and Mark Scarbrough

Anyone can throw a summer barbecue with hot dogs and burgers but if you want to throw an epic cookout your friends and family will talk about for years, we’ve got some suggestions that are as tasty as they are unique. Remember — an open mind will open up new food choices to help you beat menu boredom. Even better, we’re not talking anything too far out. Almost all these foods can be found at upscale supermarkets or small meat and seafood shops.

Bison
Buffalo cooks faster than beef because it’s leaner with almost no internal fat streaks to act as insulators. It tastes a little like beef, but meatier, heartier, less fatty, and a little earthy. In other words, buffalo tastes the way beef used to taste before the advent of feed lots, but it's not as rich as beef, so it’s chewier. The key is to not overcook it.

Because buffalo steaks are more flavorful than beef, they just need some oil, a little salt, and some ground pepper. They should also be cooked at a slightly lower temperature than beef — otherwise they might singe because of the lack of fat.

Turning once over the heat, a 1-inch-thick strip steak will take 6 minutes over medium heat for rare and about 8 to 10 minutes for medium.

You can substitute ground buffalo for beef and make burgers, but keep any other flavourings very simple to let the unique taste come through. Grilled onions, pickle relish, and light mayonnaise are good topping options, as is straightforward American yellow mustard.

Ostrich
Ostrich is a red meat comparable to chicken and might have less fat, depending on the cut. Just like buffalo, ostrich cooks fast. It tastes surprisingly like very mild beef, but a little sweeter and richer, despite its low fat content.

Look for marinated ostrich steaks at high-end markets. Fillets are the most tender. Or buy them au naturel and marinate them with your favourite bottled barbecue marinade, a little Chinese hoisin sauce, or low-fat bottled Italian dressing. You can also use ground ostrich for burgers.

Rabbit
Consider this the gamey version of chicken. Look for a fryer rabbit — about 3 pounds — and ask your market's butcher to cut it into eight pieces.

Rabbit tastes like a cross between white- and dark-meat chicken — the best of both worlds! It benefits from a 20-minute swim in a savoury marinade like rosemary, crushed garlic, olive oil, salt and pepper; or unsweetened apple juice and a jerk-seasoning mix.

Cook it over low heat because there’s no skin to protect the meat. Plan on about 35 to 40 minutes directly over medium-low heat, turning often. It’s done when it’s tender and the juices are clear. For safety’s sake, use an instant-read meat thermometer and take the pieces off when their internal temperature hits 160oF.

Duck
Talk about easy grilling! Duck breasts are perfect summer fare. The meat tastes deeper and stronger than dark-meat chicken and it's a stand-up favourite with beer or hearty red wine.

Remove the skin and the layer of fat just below it; sprinkle with a little lemon-pepper seasoning; place over high heat and cook just 4 to 5 minutes per side, until an instant-read meat thermometer inserted into the center of the breast registers 165°F. The meat should not be well done; rather, it will be slightly dark with a pink hue similar to a medium-rare steak.

Quail
Quail has a surprisingly strong taste, is a little gamey, and is best when paired with a strong-flavoured marinade. Buy the birds cleaned and semi-boneless at the butcher's counter. All bones will have been removed except the leg and wing bones. Marinate the whole birds in the refrigerator for one hour in a sweet-based marinade: a little maple syrup, mustard and apple cider; or cranberry-juice concentrate and ground cinnamon.

Set them right over high heat for about 2 to 3 minutes per side, until the skin is brown and the flesh is light pink. Serve them on top of a lightly dressed, tossed salad or a whole-grain pilaf.

Squid
Grilled squid has long been a Japanese mainstay, and it’s no wonder because it’s so easy to cook and has a lovely seafood flavour, sort of like very scallops but with more chew. Buy whole squid at the market, not the pre-sliced rings. At home, remove the tentacles, pull out the feathery cartilage, and run your finger inside the body to remove the ink sac. Wash it well — or forget all this fuss and ask the guy at your fish counter to do it for you.

Toss the squid bodies in a mixture of soy sauce, lime juice, ginger ale, and black pepper while the grill heats up. (If you really want to go wild, toss the tentacles into this marinade, too.)

Set the squid directly over high heat and cook for 3 to 4 minutes, turning once, just until firm and very lightly browned. To keep the tentacles from falling through the slats, lance them with metal skewers.

Dish it all up with pickled sushi ginger and jarred ponzu sauce on the side.

Octopus
Octopus is a favourite at sushi bars and in Greek restaurants, so it ought to make it to your grill once in a while, too. Octopus is a little stronger-tasting than squid, sort of the way shrimp are to scallops: briny, a little more complicated, but definitely not fishy.

Almost all octopus is cleaned and frozen for shipping, so there's no nasty prep at home. Some cooks rub off the gelatinous skin before cooking, but most of it will melt away over a hot grill.

You do have to tenderize octopus before you grill it. Place it in a large saucepan of water, bring it to a low simmer, and cook, covered, for about an hour, until tender when pierced with a knife. Drain and dry off the pieces, then spray with oil and place it over a very hot fire so the skin crisps without the meat drying out — about the same technique as for a chicken breast, except in a fraction of the time — about 2 minutes on each side. A sweet glaze of equal parts honey, lemon juice and soy sauce, brushed on just before grilling, will also help the pieces become irresistibly tender and tasty.