14 weight-loss mistakes and how to avoid them

A lot of what we’ve been taught about weight loss isn’t true, and it can actually hold us back from making progress. Here’s what you need to unlearn to lose weight for real.
Article by Sharon Liao

You set a goal, upped your physical activity, and started eating veggies at every meal. So when the numbers on the scale don’t budge, or move a little and then plateau, it can feel frustrating. “Weight loss is tricky, and having setbacks is normal,” says Vivek Gupta, M.D., a board-certified obesity medicine doctor in California, United States.

To start seeing more progress, take a closer look at your daily routine: Certain everyday habits can undermine weight loss. Consider the following common mistakes—and the steps you can take to steer clear of them.

1. Hyper-focusing on the scale

We get it: Watching that number tick down is exciting. But pegging your success solely on the scale can lead to frustration. “Weight loss isn’t linear,” says Angela Goscilo, M.S., R.D., a registered dietitian and the senior manager of nutrition at WeightWatchers. At times, you may stall or gain weight. According to a study published in the American Journal of Clinical Nutrition, people often hit a plateau at around six months on a weight-loss program. To avoid feeling defeated, focus on non-scale victories, such as being able to hold a plank, looser fitting clothes or playing with your kids for longer, says Goscilo. “Celebrating this progress can help you stay motivated.”

Reducing calories (kilojoules) as much as possible can seem like a great way to lose weight, but it can backfire. “If you don’t eat enough, you’ll feel uncomfortably hungry and tired,” says Goscilo. “This means you won’t make decisions about food in a calm, relaxed manner.” In other words, you’ll be more susceptible to outside influences and likelier to make what Goscilo refers to as “unplanned” food choices that don’t align with your goals. If you’ve ever found yourself at a vending machine soon after an unsatisfying lunch, you know how this feels.

“This approach is also just not sustainable,” says Goscilo. “It won’t work long-term if you’re hungry all the time and feel like you can’t eat meals out with friends because you need to be super restrictive.” That lack of energy and constant hunger from your ultra-light meals can also make it tougher to get motivated to exercise. While there’s no hard-and-fast rule of a calorie count to stay above, Goscilo says to look at your weight-loss speed. Losing more than an average of 1 kilogram a week means you may not be eating enough.

Fruit and veggie-based smoothies and juices deliver vitamins, but they won’t keep you full. “Liquids don’t fend off hunger for as long as solid foods do,” says Su-Nui Escobar, RDN, a registered dietitian nutritionist in Florida, United States. In a study published in the American Journal of Clinical Nutrition, researchers found that people who drank a pre-meal snack had higher levels of the hunger hormone ghrelin—and felt less full—compared to those who had a solid food snack.

This can set the stage for weight gain: The smoothie drinkers from the above study wound up consuming more than 400 extra calories throughout the day. Another reason to take more bites than gulps out of your meals? Research shows that the act of chewing itself increases the release of gut hormones that fend off hunger.

4. Not getting enough sleep

When life gets busy, sleep is often the first thing to get shortchanged. According to the Sleep Health Foundation - Australia’s leading advocate for healthy sleep, inadequate sleep, of either duration or quality affects 33-45% of adults. In addition to affecting your mental abilities and emotional state, not getting enough shut-eye raises the risk for weight gain. One study from the University of Colorado showed that people who logged only an average of five hours of sleep a night gained an average of one kilogram in less than a week.

Sleep deprivation triggers changes in the hormones that regulate hunger and fullness, such as ghrelin, leptin, and peptide YY. It also dampens your ability to self-regulate, which makes you more likely to overeat, says Gupta. Aim to get at least seven to eight hours of shut-eye each night. Experts recommend this amount because it’s linked with better health, such as a reduced risk for heart disease, diabetes, obesity, and depression.

You know protein is important, but you’re likely eating the majority of it at dinner. Why does that matter? Because when you’re missing protein from other meals or snacks, say by eating toast for breakfast or a big green salad for lunch, you can wind up feeling hungry a lot sooner. “Protein gives your meals staying power,” says Escobar. “It takes longer to digest, so you feel fuller for longer.” According to a study in the American Journal of Clinical Nutrition, protein increases satiety more than carbohydrates or fats. Protein also maintains muscle, which burns more calories than fat, says Gupta. One of the best approaches to protein is to eat it throughout the day, so add eggs or Greek yoghurt to breakfast and nuts or cheese with your afternoon snack. 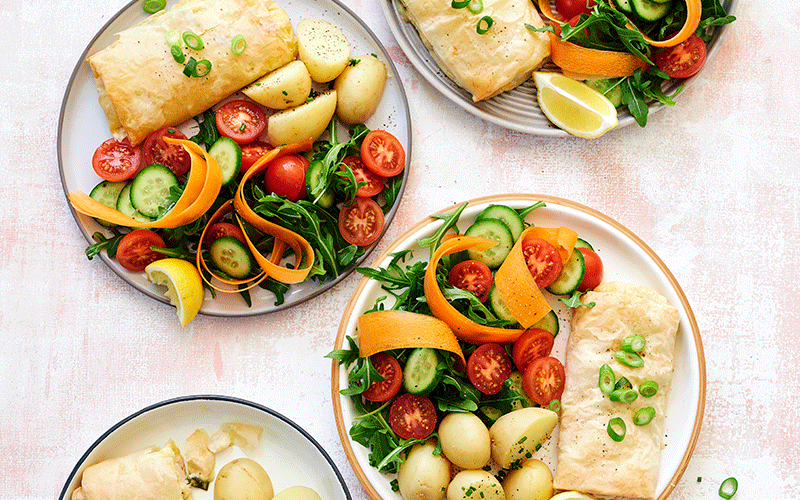 There’s no question that portion sizes have grown substantially since the 1970s. For example, an average serving of snacks, such as potato chips or pretzels, has gone up 60%. This goes hand-in-hand with the increase in obesity, according to a study in the American Journal of Public Health. When people are served more food, they tend to eat more, says Goscilo. Even the smartest eaters can misjudge their own portions: British researchers found that people tended to underestimate serving sizes by as much as 46%.

Along your weight-loss journey, measure your portions to figure out exactly how much you’re eating, says Goscilo. Not keen to pull out the measuring cups at the restaurant or office kitchen? We get it. You can also use your hand as a quick guide: A 85g serving of meat is roughly the size of your palm; 30g of cheese equals your thumb; and your fist is about a cup of pasta or fruit.

Sipping water also delivers a long list of other health benefits, including boosting mood, preventing headaches, and fending off fatigue. How much H2O should you drink? Everyone has their own specific needs, but a general rule of thumb is to drink enough so that the colour of your urine is pale yellow.

Sure, some snacks can add nutrition to your diet. They can also take the edge off your hunger, so you don’t overeat at your next meal. But sometimes we snack out of boredom or wind up getting too many calories from grazing. To prevent overeating, have a snack strategy: Time snacks three to four hours after a meal, and look for satisfying options. “Grabbing a bag of chips or pretzels won’t fill you up for long,” says Goscilo. Look for snacks that have both fibre and protein (see tip No. 5 above), such as wholegrain crackers with cheese or Greek yoghurt and fruit.

9. Having an all-or-nothing mindset

You ordered the plate of hot chips—so you might as well order dessert and start over tomorrow, right? This perfection-or-bust thinking is common, but it can undermine your weight-loss efforts. Between complimentary bread at a restaurant and office birthday cake, you’re faced with unplanned food offerings all day long. “It’s impossible not to slip up from time to time,” says Gupta.

But instead of feeling guilt or shame, take a moment to think through what happened without any judgment. You may realise that you impulsively added the chips and biscuits to your lunch order because you were feeling overwhelmed or stressed about something. Reframe these so-called mistakes as an opportunity to learn and try again, says Gupta.

A meal plan takes the guesswork out of shopping, prepping, and cooking, and ensures that you’ll have a healthy option. “Start by planning out just one meal,” says Goscilo. Make sure that you have all the ingredients and enough time to cook and prepare it. Then, after you’ve mastered planning out one meal in your day, add another meal and snacks.

When a friend swears by a new fad diet—say, a juice fast or a low-carb or no-carb plan—it may be tempting to give it a whirl too. “But they’re not sustainable over the long run,” says Goscilo. These plans usually work by cutting out entire food groups or avoiding a long list of foods. “That’s not reflective of real life and how people eat," says Goscilo. When you eventually stop the diet, chances are you fall back into your old habits. This can set the stage for yo-yo dieting.

Research shows that the most successful weight-loss strategy is the one that you can stick with. A good approach—one that WeightWatchers centres on—is creating lifelong habits, focusing on eating a variety of nutrient-dense foods, such as fruits, vegetables, wholegrains, and lean protein.

You meant to hit the gym or go for a long walk, but then your day just got too busy. Sound familiar? Yes, life happens—and sometimes that means workout plans don’t work out. But it’s important to make physical activity as much of a priority as possible: Research shows that it’s one of the biggest predictors of long-term weight maintenance.

One review of 33 studies found that people who exercised regularly and changed what they ate lost 20% more compared to those who only dieted—and were more likely to keep the weight off.

“The best workout is the one that you’ll keep doing,” says Goscilo. Go for a bike ride, have a dance party, or do strengthening moves while you cook. You can also break it up into small chunks: Try squeezing in 10 minutes of exercise (walk the dog, tend to your garden, or race your kids) throughout your day.

13. Not keeping track of what you eat

Whether you jot it down in a notebook or put it in a handy app like WeightWatchers, keeping a food diary increases your chances for losing weight—and keeping it off, according to a study in the Journal of the American Dietetic Association. It can help you determine if you need to make any changes, says Kathryn M. Ross, Ph.D., an Associate Professor in the University of Florida’s department of clinical and health psychology, United States. “It’s hard to evaluate progress if you’re not tracking it,” she says. “It’s like trying to go on a road trip with a car that doesn’t have a petrol gauge.”

To get started, take notes on the kind and amount of food you eat, along with the time you ate it, at each meal and snack. “That said, something is better than nothing,” Ross says. If you can’t track every bite, focus on the meals that you tend to struggle with, such as weekend lunches and dinners.

With cheat days, the idea is that planned breaks in your diet can help you stay on track. You stick with your diet for six days and let loose on the seventh. But the concept of “cheating” is a red flag, says Goscilo. “It’s a sign that you’re depriving yourself on all the other days,” she says. Having off-limit foods can set the stage for constant cravings. “All foods should fit into an overall weight-loss plan,” she says. “Including burgers and pizza.” And that’s not cheating—it’s living.

Read on for more weight loss and healthy living tips

How to lose weight