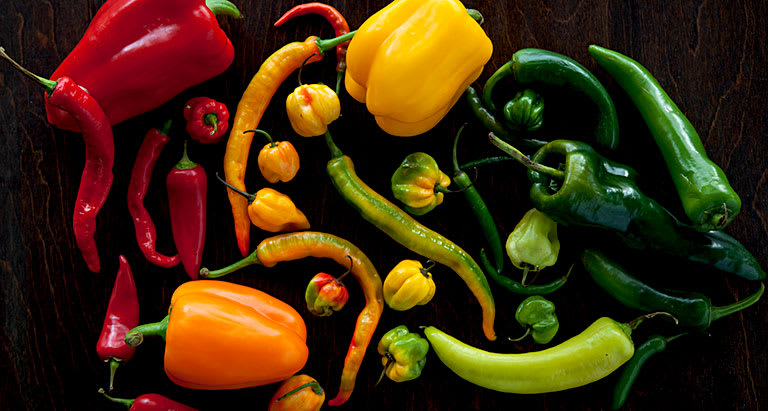 The Skinny on Peppers

For spicy variety and healthy living, nothing beats a peck of piquant peppers.
By Debbie Koenig

They’ve been cultivated for more than 6,000 years. They’re crucial to cuisines throughout Latin America, Asia, Africa and the American Southwest. They offer a surprisingly wide range of health benefits. And some of them are so hot they’ll knock your socks off. That’s right, we’re talking about chili peppers.

Fresh peppers, especially the red ones, are an excellent source of Vitamins C and A. Studies have shown that capsaicin, the compound that provides both fresh and dried chilies with their fiery kick, may be effective in fighting such diseases as diabetes, heart disease and cancer. Use this guide to shop for, store and cook with these dietary dynamos.

A note about heat: In general, the smaller and narrower the pepper, the more incendiary it becomes. The Scoville Scale, named for the scientist who first measured chilies’ blazing effect, ranks peppers by their firepower. But it’s not absolute — because seed lineage, climate and soil can all affect capsaicin content, a jalapeno you purchase this week may be hotter than one you buy next week. Our visual guide lays them out in ascending Scoville order. (Mouth on fire? Try a spoonful of full-fat dairy products like sour cream or yogurt — they’re most effective at dissolving the capsaicin. Counterintuitive as it may seem, water will only feed the flames.)

Fresh
Buy Look for peppers that are firm and glossy, with no wrinkles or soft spots.
Store Refrigerate unwashed in a plastic bag for up to a week
Use Cutting into a chili releases capsaicin-filled oils, so be extremely careful not to touch your eyes, nose or mouth — even after washing your hands, since soap won’t remove all the residue. In fact, we recommend wearing gloves. To temper some of the pepper’s heat, remove the seeds and the fibrous white ribs, which have the highest concentration of capsaicin.

Dried
Buy Flexible, relatively soft peppers are freshest and pack the most punch. Look for even coloring with no brown spots.
Store Bugs love dried chilies, so store for up to a year in an airtight container in the fridge or freezer.
Use Dried chilies’ oils can irritate skin, so take the same handling precautions as you would with fresh. Toasting brings out the flavor: Heat in a dry skillet, over medium heat, for about three minutes — just until softened and slightly darkened in color. Then rehydrate in a bowl of hot water for 20 minutes to an hour, remove and discard stems and seeds, and proceed with recipe.
Look for peppers that are firm and glossy, with no wrinkles or soft spots.

Powdered
Buy     Look for bright, fresh color and purchase from a store with a fast turnover — ground spices lose their impact with time.
Store      Keep in an airtight container in a cool, dry place, for up to six months.


Have a look, get the lowdown, and learn to use your Anaheims, Scotch Bonnets and more. Check out fresh, dried and powdered peppers, listed in that order, from the mildest to the most fiery.

Chipotle-lime shrimp with corn and poblanos