The Most Important Things to Know About Diabetes Signs and Symptoms

The earliest symptoms of diabetes can be super subtle—but if you miss them, they can grow more severe over time. Here's how to spot those first signs, so you can get your condition under control sooner for better long-term health.
Krista Bennett DeMaio

Affecting 37 million people in the U.S., diabetes mellitus (the formal name) is a chronic disease caused by too much glucose, or blood sugar, circulating in your body. This can be caused by one of two things: Either your pancreas doesn't produce enough insulin (a hormone that regulates blood sugar), or your body can’t properly use the insulin it has (something known as insulin resistance). Insulin's job is to carry glucose to your cells for energy. When it doesn’t, you wind up with too much glucose in your blood, triggering inflammation and ultimately organ damage.

What are the signs of diabetes?

Diabetes symptoms tend to fly under the radar—so, it's possible you won't experience any signs. In fact, it's estimated that one in five people with diabetes have no idea that they have it. "For many, by the time you start getting symptoms, your diabetes has been around for months or even years," says Dr. Shabina Ahmed, M.D., an endocrinologist and an assistant professor of medicine at Johns Hopkins University, in Baltimore.

That said, there are some common signs to keep an eye on for type 1 and type 2 diabetes. (Prediabetes and gestational diabetes don't have clear symptoms.) If you notice any of the following, discuss it with your doctor.

What are the more unusual symptoms of diabetes?

While they aren’t as common as the symptoms listed above, doctors do sometimes see the following in people with diabetes.

Tell Me More About…Diabetes and Depression

Q: I know diabetes can cause irritability, but can it make you depressed?

A: It’s not fully understood. For one, the stress of living with diabetes, a condition known as diabetes distress, can certainly take a toll on mental health. But there also might be something happening on a physiological level. One study of patients with type 1 diabetes found that high blood sugar raises glutamate, a neurotransmitter associated with depression.

Q: What about the other way around?

A: There is indeed some evidence that depression increases your risk of diabetes, since high levels of cortisol, the stress hormone, can lead to elevated glucose levels and increase insulin resistance. "It becomes a vicious cycle in some cases," says Ahmed. A study in JAMA Internal Medicine found women with depression were 17% more likely to develop diabetes.

Q: Can you treat the depression by treating the diabetes and vice versa?

Do the symptoms differ by type?

The signs of diabetes are generally the same for type 1 and type 2, with a few exceptions. 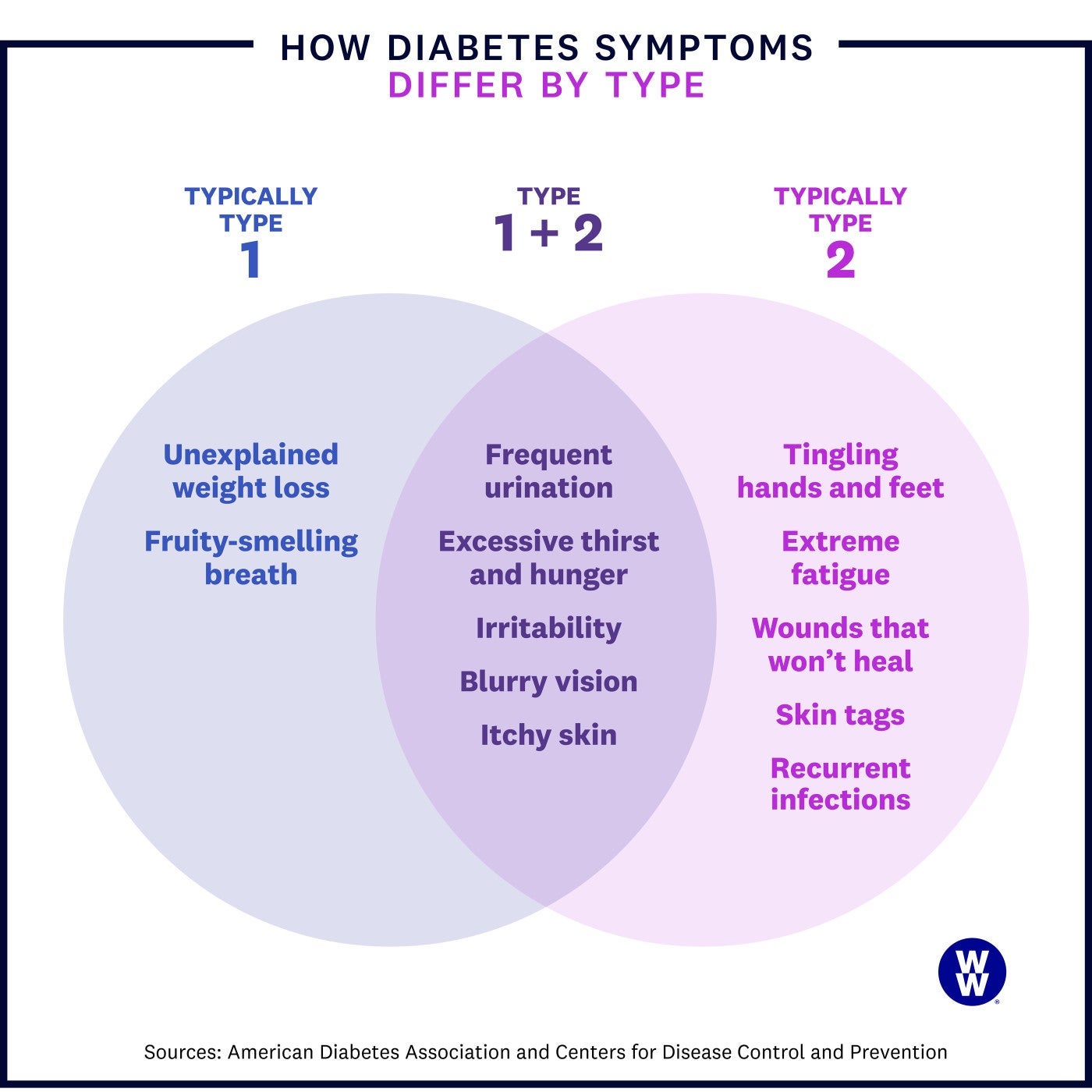 Are the symptoms different for men and women?

For the most part, diabetes symptoms are the same no matter your sex assigned at birth. But there are a few exceptions. Erectile dysfunction and impotence occur in up to 80% of men with diabetes—the blood vessels and nerves involved in an erection can get damaged from high blood sugar. This is something that likely wouldn’t happen until after you’ve had diabetes for some time, says Ahmed. Women, on the other hand, are likelier to experience recurring vaginal yeast infections. (Men can get yeast infections, too, but they occur on the skin and groin.) Women are also at a higher risk of diabetes-related urinary tract infections due to the anatomical structure of their urinary tracts.

So how do I know if I have diabetes?

A doctor will need to diagnose you, which can be done a few different ways.

Glucose levels are checked after you haven't eaten for 8 to 12 hours.

At the start of this two-step test, you're given a very sweet drink to gulp down. Two hours later, your blood is drawn to see how your body processed the sugar load.

The OGTT is most commonly used to diagnose gestational diabetes, which is indicated if your blood sugar is 190 mg/dL or higher. If you're in this range, you'll have to repeat the test and have your blood drawn hourly for three hours to confirm a diagnosis.

Your doctor may also check your average A1C level with this test—a longer-term (over three months) measure of blood sugar control. Sugar binds to a substance called A1C in your blood, so when your sugar is elevated, your A1C level will be too. "A1C levels are important to check if you’re taking oral steroids, since they can raise the blood sugar level on a fasting blood test," says Sassower.