What to eat on a vegan diet

From soy to seitan, get ingredients, recipes and tips for making delicious vegan dishes.

A guide to eating vegan

Some chose to avoid animal products for health reasons, others for ethical ones, but all vegans eat a diet consisting of only plant-based foods. Unlike vegetarians, who might eat dairy, honey or eggs, many vegans will drink milk made from soy or other plants, drizzle agave nectar into their tea and eat scrambled tofu at breakfast.

Veganism as a way of life began to take hold in the 1940s, and over the last few decades, it (along with vegetarianism) has attracted millions of people worldwide. But merely giving up animal products doesn't automatically create a healthy diet.

Certain nutrients, including calcium, vitamins B12 and D, iron and omega-3 fatty acids, are less abundant in plant-based products. Highly processed vegan convenience foods can be just as full of fat, sugar, and sodium as their non-vegan counterparts. So make sure you’re in the know about what substitutes provide a healthier alternative for a plant based diet.

If you’re going to eat a vegan diet you’ll need to familiarise yourself with certain key foods. These delicious, satisfying ingredients will help you get the nutrients you need.

Beans, peas, and lentils are vegan staples — they provide protein, fibre and a host of vitamins and minerals. Some are also a good source of iron, which is a mineral that may be lacking in a vegan diet.

In soups, salads, mixed with grains or as the base for homemade veggie burgers.

Soybeans are a type of legume that transform into a variety of fundamental vegan products.

Often used to make mock-meat products, seitan is a block of wheat gluten, formed by rinsing all the starch and bran from a basic flour dough. Making your own seitan can be easy, yet time consuming. Many people buy it ready-made, sometimes pre-seasoned. Read nutrition facts carefully, since as with any processed food, seasoned seitan can be high in sodium.

More than just a filling nibble, these versatile foods play several roles in the vegan kitchen.

While any type of grain can be part of a vegan diet, wholegrains, in particular, provide B vitamins as well as fibre and protein which will help you feel fuller for longer. Quinoa, brown rice, barley, bulgur, corn, and spelt are just a few options you could try.

Wholegrains can be cooked like pasta, boiled in a large pot of salted water, then drained; leftovers freeze well too.

Umami, the complex, funky 'fifth taste' (after sweet, salty, sour and bitter) that seduces you back for one more forkful, is easy to find in animal products like parmesan cheese, fish sauce, and cured meats. Vegans turn to nutritional yeast, mushrooms and sauerkraut, among other substitutes, for that satisfying flavour.

Generally speaking, vegetables add colour, crunch, and variety of nutrients, so you’ll want to keep a wide range in your fridge. It’s no secret vegetables are an important part of a vegan diet, however some are more crucial than others.

In addition to being the perfect portable snack, fruit helps adapt countless recipes to be vegan-friendly.

Taking butter off the table might seem like a challenge, especially for baking, but there are some fantastic vegan substitutions:

Depending on how the eggs will be used, you have several options.

Because they’re all plant-based, herbs and spices are used liberally in vegan cooking. Spice mixes from around the globe liven tofu and bean dishes, while fresh herbs add a burst of flavour to salads, soups, and stews. Try spices like curry powder, Chinese five-spice powder, and chili powder.

You may already know that honey is not an option for most vegans - it goes against the vegan ethos to exploit bees - but did you know that white, powdered and brown sugar can also cause problems? Cane sugar varieties may be processed using bone char, a charcoal derived from animal bones. To be sure your sugar is vegan, look for any of these terms on the label: evaporated cane juice, organic unbleached sugar, raw sugar or beet sugar. Maple, date or coconut-palm sugars are all vegan options. To replace honey, try maple syrup, molasses, rice malt syrup, agave nectar, golden syrup or concentrated fruit juice.

Because vegans don’t need to soften tough cuts of meat, many recipes cook quickly in a frying pan or wok. Try tossing a bunch of chopped vegetables, chunks of tofu or tempeh and your choice of seasoning — soy sauce or your favourite spice mixture — over medium-high heat and 10 minutes later, dinner is ready.

Another quick-cooking technique, steaming has the advantage of using no added fat. Steaming is often the first step in preparing tempeh, and it streamlines the process of making seitan from scratch.

You may think of carnivorous classics like pot roast when you hear the word “braising,” but this slow-cooking technique works wonders with vegan recipes, too. This technique calls for browning food in a little-added fat, then pouring in a bit of liquid, covering and simmering for a long time. This adds tremendous amounts of flavour to blander vegan proteins like tofu and turns vegetables into exquisite, melt-in-your-mouth gems.

A relatively short time (usually half an hour or less) in a hot oven transforms vegetables from average to spectacular. That high, dry heat caramelises the outside of the vegetables, lending a hint of sweet nuttiness, to virtually anything. Come holiday time, impressive roasts made with seitan or tempeh grace many vegan tables.

With an increase in popularity, vegan baking has improved over time. Butter can be replaced with vegan fats and as much as half the amount with pureed fruits, vegetables, even beans. As with any low-fat baking, take care not to over-mix, or the finished product might be unpleasantly tough and chewy. Vegan egg substitutes are sold in most natural-foods stores, or you can make your own using the techniques described above. Milk options are endless, with soy, almond, coconut, even grain-based varieties widely available. 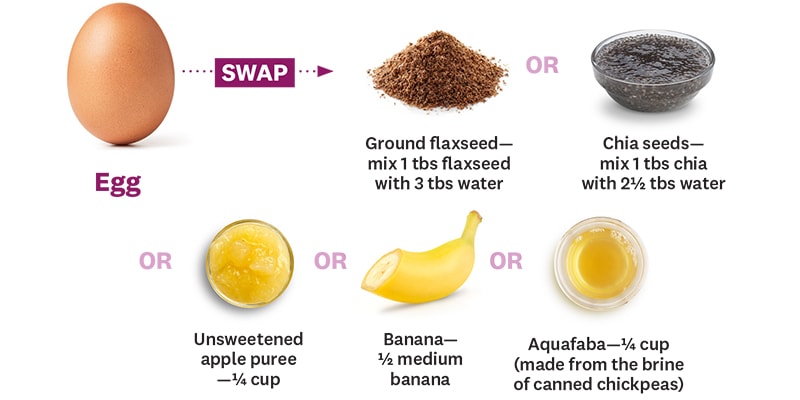