The most important things to know about diabetes

Processing a diabetes diagnosis is hard enough without having to manage all the misinformation. We’re cutting through the confusion to deliver the facts—about everything from symptoms to treatment. So you can stress less and enjoy more.
Article by Krista Bennett DeMaio

Affecting around 1.8 million Australians and over 250,000 New Zealanders, diabetes is a chronic condition that, on the most basic level, develops when too much glucose (blood sugar) is circulating in your body. To illustrate how this happens, let’s start with a little physiology. We get glucose from two sources: the foods and drinks we consume, and the liver.

If your glucose level dips—say, between meals—then the liver converts glycogen (a form of sugar stored in the body) into glucose for an energy boost. In order for that glucose to get distributed to the body’s cells and get to work we need a hormone called insulin (made by the pancreas) to help transport it.

When you have diabetes, however, your pancreas may not produce enough insulin. Or it does produce enough insulin, but your body just doesn’t respond to it. In fact, “most people who have type 2 diabetes actually have very elevated insulin levels,” says Dr. Shabina Ahmed, M.D., an endocrinologist and an Assistant Professor of Medicine at Johns Hopkins University, in Baltimore, United States.

As a result, you wind up with an excess of glucose in your bloodstream, which, if left unchecked, can lead to inflammation, triggering additional health issues.

What are the types of diabetes?

Type 1 diabetes (T1D) is an autoimmune condition with a strong genetic link. In people with type 1, an overactive immune system attacks the pancreas, damaging its insulin-producing cells (known as beta cells) until they no longer make enough insulin to manage blood sugar levels. Because of the genetic predisposition and the underlying autoimmune component, T1D is typically diagnosed in childhood (you may have even heard it referred to as juvenile diabetes), but an increasing number of people are getting diagnosed in adulthood. Recent epidemiological data have shown that more than half of new T1D cases occur in adults. (More on the rise of adult-onset T1D in a minute.)

With type 2 diabetes (T2D), your pancreas can produce enough insulin, but your body is insulin-resistant, meaning it can’t absorb and use glucose properly—the result of a perfect storm of genetic and lifestyle factors, such as carrying excess weight and living a sedentary lifestyle. The most common form of the disease, T2D affects up to 95% of all people with diabetes. It's often referred to as adult-onset diabetes, but just as the rate of T1D in adults is escalating, so, too, is the rate of T2D in children, rising 4.8% per year between 2002 and 2015, according to SEARCH for Diabetes in Youth, a multicenter study in the United States.

Often considered a precursor to T2D, prediabetes means your blood sugar is elevated, but not yet elevated enough to be considered diabetes.

“When you have prediabetes, your blood sugar levels are not necessarily going to be consistently high,” says Dr. Joshua Miller, M.D., the Medical Director of Diabetes Care at Stony Brook Medicine, in New York, and an Associate Professor of Endocrinology and Metabolism at Stony Brook University. “And so you may not be symptomatic.” Meaning the most likely way to get a diagnosis is through a regular checkup with your doctor, like an annual physical exam and corresponding blood tests. While prediabetes puts you at a higher risk of developing T2D, it isn't inevitable: Consider it a heads-up to prioritise healthy habits and get blood sugar levels back on track.

As the name suggests, this type of diabetes occurs during pregnancy—which also means it’s temporary. When someone is pregnant, their placenta produces hormones that can cause higher levels of glucose in the blood. In roughly 10% of women, this leads to insulin resistance and excess blood sugar. Luckily, gestational diabetes typically goes away after delivery, but it can be a precursor to prediabetes and/or T2D.

What are the risk factors for diabetes?

That trigger, notes Miller, can happen at any age, which could explain the rise in adult-onset cases. T1D may potentially be set off by viruses (including COVID-19) and stressors such as surgery, and it can also occur when the pancreas is damaged or removed due to another health condition, such as chronic pancreatitis. A family history of T1D and other autoimmune diseases can also up your risk; “you may have a family member with hypothyroidism or multiple sclerosis—autoimmune diseases tend to run in families, but they don’t always present in the same way,” says Ahmed.

Like T1D, experts believe both genetics and environmental triggers play a large role in T2D. “If you talk to someone with T2D, they will probably tell you of at least one relative who also has the disease,” says Ahmed. But having a genetic predisposition doesn’t mean you’ll definitely develop the disease. Other factors raise your risk, including:

Since prediabetes can act as a precursor to T2D, the risk factors are primarily the same, including family history, lack of physical activity, and excess weight.

Your blood sugar levels should return to normal after you give birth, but having gestational diabetes does put you at a higher risk of developing T2D in the future; according to Diabetes Australia. 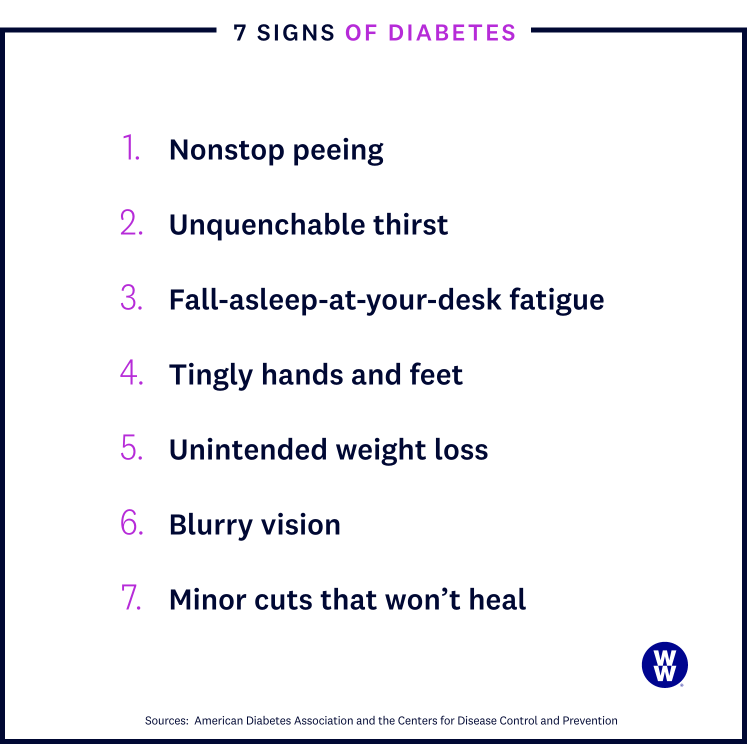 What are the symptoms of diabetes?

While there are different types of diabetes, the signs and symptoms are the same, and that’s true for both men and women. If you're experiencing any of the below, it's time to check in with your doctor.

It's worth noting that for some people, the symptoms of T2D are absent or so mild that many don't even know they have the disease; according to Diabetes Australia. The American CDC notes an estimated one in five people with diabetes don’t know they have it. Likewise, prediabetes and gestational diabetes often occur without symptoms, so many people aren’t initially aware they have these conditions.

How can diabetes be prevented?

Researchers don’t know enough about T1D yet to advise on how to prevent it—or whether it’s even preventable. The story differs for prediabetes and T2D. Research shows that even losing just 5% to 7% of your body weight reduces your risk of developing T2D.

One way to do that is through a customised weight-loss program. In a clinical trial in the American Journal of Public Health, the WeightWatchers program helped adults with prediabetes lose weight and significantly improve their blood sugar levels at six and 12 months, holding off T2D.

How is diabetes diagnosed?

Doctors rely on several blood tests for diabetes—the fasting blood sugar test being the most common. This test measures the amount of glucose in your blood after an overnight fast (i.e., not eating). The scoring goes like this:

There's also an oral glucose tolerance test, often used to diagnose gestational diabetes. During this test, your blood sugar levels are measured in regular intervals over three hours after you drink a glucose drink.

What are the complications of diabetes?

When blood sugar stays elevated for too long, it leads to inflammation that damages your organs. How long is too long? On average, about 10 years. Here’s what can happen over years and decades when glucose levels go untreated:

What is the best diabetes treatment?

Your treatment will depend on your type of diabetes and its severity. Are you destined to be on meds? Not necessarily. Your doctor will push lifestyle changes, which may help hold off meds. “If a patient’s blood sugar levels aren’t too high when newly diagnosed, I’ll give them three months to turn things around through diet and exercise,” says Ahmed. “If they have moderate to high hyperglycaemia [high blood sugar], then we'll do lifestyle changes plus medication right away,” she adds. Here are the treatment options.

Diet and exercise alone can't reverse T1D, but healthy eating, exercise, and prioritising sleep can help you better manage the disease and its symptoms. For patients with T2D, eating well, exercising, and losing weight may help you avoid medications, including insulin.

For people with T2D who are overweight or have obesity, the recommendation from the International Diabetes Federation is to lose at least 5% of your weight and keep it off. "Weight loss is very unlikely to happen with exercise alone," says Ahmed. Exercise has been shown to reduce insulin resistance, but you'll need to make dietary changes if your goal is to lose weight.

With T1D, your pancreas doesn't produce enough insulin, so supplementing with insulin is a must. However, insulin is less common in treating T2D. Insulin can be taken in a few different ways:

In Australia there are several classes of medicines used to treat T2D, including:

Is there one diet that’s best for people with diabetes?

Experts say no. You don't have to go no- or low-carb to manage your diabetes (phew!). Still, reducing your intake of carbohydrates—particularly processed, sugary foods—while boosting your fibre intake (which includes beans, peas, and lentils) is helpful. High-fibre foods break down more slowly, so your system doesn't get the flood of glucose that comes from sugar-laden foods.

If you need help prioritising quality, whole foods, WW’s program is a customised science-based plan to help you lose weight while still eating the foods you love.

Exercise can also help reduce blood sugar and A1C levels. Those with T2D who work out regularly tend to have better blood sugar control than those who don’t, a 2020 study in Medicine & Science in Sports & Exercise showed. Here’s what you want to do:

While diabetes is undoubtedly complex, getting it under control doesn’t have to be. By levelling up your diet, squeezing in more movement, and working in partnership with your doctor, you can help minimise the complications of diabetes, so you can feel your best—and live your best life possible.

The WW program and guidance are not intended as a substitute for medical diagnosis, treatment, or advice. You should always consult your healthcare provider about any healthcare issues.