Increased fitness and good times are just two of the perks of netball. Here’s everything you need to know about the game.

Are you keen to start a team sport, or looking to get back into a game you haven’t played for years? Netball might be a winner.

Numerous advantages were reported with the most common being increased wellbeing and reduced stress. Club or team sports were the most beneficial, thanks to their social nature. “Social interaction is such an important part of netball specifically and sport in general,” says former Australia National Netball captain and netball coach Anne Sargeant. “There’s a euphoric hit when you exercise the body and mind, made even more fun in the joyous company of people.

Team camaraderie is a very important component of netball.” Social benefits aside, netball is also an amazing way to stay fit. “Because netball involves so much starting and stopping, it’s like interval training so it’s really good for weight loss and cardiovascular fitness,” says exercise physiologist Neil Russell. “It’s also terrific for leg and arm toning, core strength, balance, coordination and spatial awareness. It’s a fantastic way to exercise without really noticing you’re doing so because you’re working as a team and having fun along the way – it’s not just your own physical pursuit.”

With netball being so readily accessible to most people, Anne believes it’s the perfect sport for everyone. “Anybody in Australia and New Zealand can find a club near them, it’s cost-effective and very little equipment is needed,” she says. “And no matter what club or group you join, there are various divisions to suit your ability, making it a positive and satisfying experience.”

Get in the game 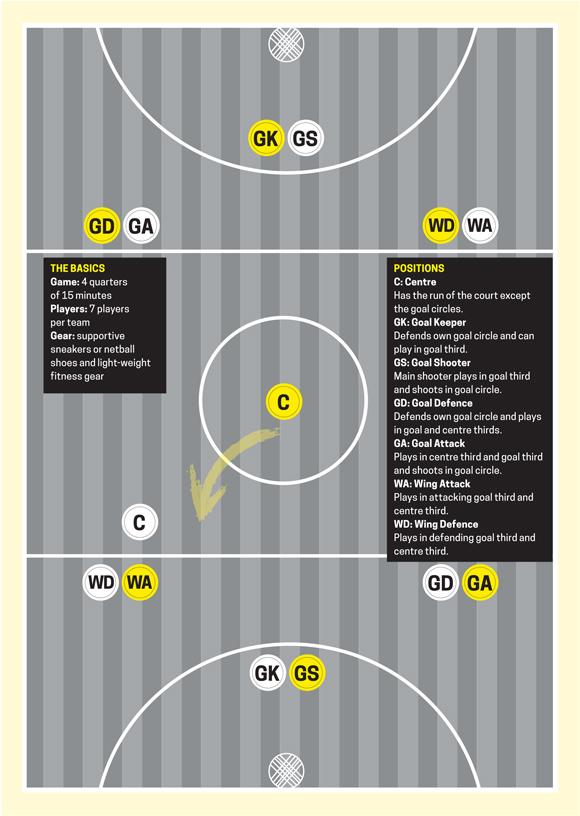 Training for the game

"The quick stop-and-start nature of netball can be very hard on the knees,” says Neil. So it’s important to improve your overall fitness and strengthen key muscle groups to help prevent injury on the court – especially since there’s a high incidence of injury among netballers. “Netball has one of the highest rates of anterior cruciate ligament (ACL) tears, which is a knee injury,” says Neil. Here are the exercises you need to get netball-ready.

“If you have good cardiovascular fitness, you’re less likely to fatigue and get injured,” says Neil. “You’re also more likely to keep up with the game and enjoy it. “Try sprints and HIIT mixed with some agility-style training. Shuttle runs – where you run from a starting line to lines that are progressively further away – cover this, especially if you vary the speed in between them.”

To prevent knee injury, do stability and strength work in your glutes while keeping your knees strong and correctly aligned. “Try squats, lunges and skaters (bounce on one leg and hop across to the other leg) while paying attention to your knee alignment. These exercises can also increase your agility, leg strength and speed, so they’ll improve your game as well as prevent injury,” says Neil.

"If your core is weak, another muscle group has to pick up the slack,” says Neil. “It then gets strained and injury ensues.” Try some planks to keep your core strong. “Being able to make fast contact with the ground and change your foot positioning quickly will improve your game,” says Neil.

There’s a lot you can do to work on your agility, such as drills with speed ladders.” Try the hopscotch drill: place a speed ladder on the ground – or draw one with chalk. Jump up with both feet and land on your left foot in the fi rst square. Push off with your left foot then land with both feet in the second square. Jump and land on your right foot in the third square. Push off with your right foot and land on both feet in the fourth square. Repeat.