A lifelong planner, I’d scheduled nearly every minute of my husband’s and my vacation in the Eternal City. But when he got sick, I had no plan B. That’s how I discovered a whole new side of myself.
By Melanie Mannarino

I’ve never been one to seize the day. Maybe that’s because I was raised by a single mom who bounced from moment to moment. She didn’t plan meals or believe in play dates (“Go see who’s outside!”), and when summer break began to feel too predictable, she’d load up the car, belt my brother and me into the back seat, and hit the open road for Vermont, Maine, or New Hampshire (she’d decide when we got there). We’d set up camp and eat scrambled eggs by the fire and hike down dirt trails to swim in the lake. Those trips were fun, but I hated their uncertainty. Even as a kid, I needed to know exactly what I’d be doing and when.

In high school, my friends and I learned that U2 was flying into our local airport on a weekday. We were all rabid fans—but rather than hop into a taxi with my pals Tami and Keira, I urged them to go while I covered for them at school. I envied their gutsiness but couldn’t muster it myself. True, I felt a pang when they came back gleefully waving The Edge’s autograph. But their scheme could so easily have gone awry. I preferred to stick with the program.

A decade later, I found myself in Italy on a long-awaited dream vacation with my husband. I’d pored over guidebooks to Venice, Florence, and Rome, marking restaurants to try, sights to see. Then, two-thirds of the way through our trip, as we checked into our hotel in Rome (steps from the Vatican, thanks to my pretrip reconnaissance), my husband was stricken with a stomach bug. I’d spent the train ride from Florence plotting romantic meals by the Spanish Steps, calculating the time we’d need at the Colosseum, and daydreaming about evening strolls on atmospheric side streets. His getting sick was not part of my carefully scripted scenario.

I paced the room. Peered out the window. And concluded the obvious: I’d be exploring Rome by myself. Before I could waffle, I gave my husband a quick kiss and walked out the door. 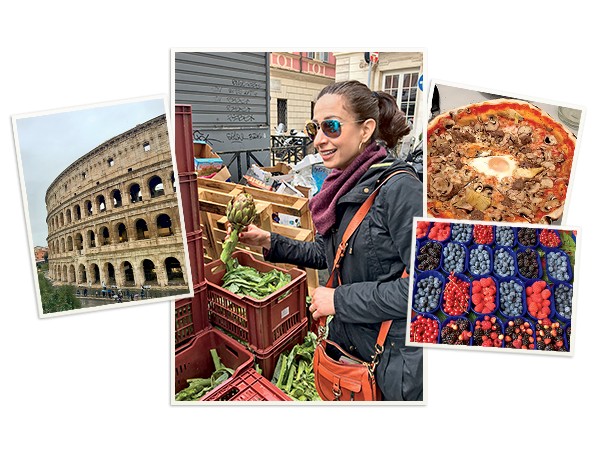 The April air had a chill in it, and I was glad I’d brought a scarf (perk of planning No. 243). As tiny European cars zipped by, I crossed the bridge to the heart of the city. My guidebook was in my bag, but I was determined to wing it.

As I navigated the narrow streets, my attention jumped from the ancient city walls, to rainbow displays of gelato, to what I assumed were locals striding purposefully while speaking rapid-fire Italian into their phones. I strained to understand them. I’d studied my Italian phrasebook for months, memorizing words and idioms, but I’d uttered none of them since arriving in Italy. I was shy about my pronunciation and got in the habit of whispering the phrases to my husband, who’d speak them aloud to waiters, concierges, and shopkeepers.

Now I was on my own. And craving an espresso. I spotted a caffè sign and ducked into what seemed like a grocery store. Finally, against a back wall, I saw a counter. Stepping up to it, I made eye contact with the man on the other side and said, Un espresso, per favore. He nodded and turned to make my drink. Just like that. Six days into my trip, I’d ordered my first espresso.

Outside again, I got caught up in a big group of American tourists. When I heard their seemingly knowledgeable guide say they were headed to the Trevi Fountain, I tagged along, listening to the tour guide describe various plazas and squares. We walked down streets lined with shops and divine-smelling trattorias. Then we rounded a corner and there was the Fontana di Trevi in all its travertine and marble glory. It was breathtaking—all the more so for sitting smack in the middle of a bustling urban extravaganza. I snapped a few photos, then peeled off from the group.

I peeked at my map and pointed myself in the general direction of the Pantheon, my stomach growling. In the spirit of the day, I resisted the urge to consult my guidebook for a restaurant; instead, I beelined to the first one I saw with outdoor seating and a heat lamp. My husband and I usually shared plates, so we could taste more dishes. Now I couldn’t decide between the carciofi alla romana (Roman-style artichokes) and the pasta cacio e pepe (a favorite I can never resist). So I ordered both— yes, in Italian!—and enjoyed every bite.

I popped into a bookstore, a jewelry store, a leather goods store, and even a designer boutique or two (I could hardly pass Gucci without looking). Whenever a sales clerk said, Buongiorno, I smiled and returned the greeting. When I finally reached the Pantheon, I lingered without worrying about where I needed to go next. I read every sign and plaque, examined every 2,000-year-old Corinthian column, and lost all sense of time as I stood in the shaft of late- afternoon light streaming through the oculus of that vast concrete dome.

I was wending my way back to the hotel when my eye fell on a huge tower with an angel statue on top, just across the river. Curious, I headed for it. That’s how I discovered Castel Sant’Angelo, also known as Hadrian’s Mausoleum. The emperor commissioned this cylindrical building as his tomb around a.d. 135, but over the centuries it has been a fortress, a castle, a prison, a papal residence, and, now, a museum. I roamed the levels, soaking up history, art, and a magnificent rooftop view of the city, and thanked the travel gods for guiding me to this treasure.

That day in Rome was a turning point. I tapped into my inner well of spontane- ity and didn’t mess up. The point, in fact, was that I couldn’t mess up. With each on-the-fly decision I made, I exposed myself to a new experience.

Eventually, my husband and I divorced, which threw a major wrench in my life’s plan. By then, however, I knew the value of rolling with the punches and staying optimistic. In time I remarried, had a son, and today my family of three follows a strict weekday routine, but on weekends we play it by ear. I’ve found the happy medium between my mom’s impulsiveness and the rigid structure I imposed on myself in reaction to it—and I like to think I’m instilling an appreciation of both in my 8-year-old.

Recently, I returned to Rome on business. The old me would never have left my family to travel overseas. How could our well-oiled household machine run without me? But I knew my two guys would do just fine if I disappeared for a few days; moreover, I’d be setting a good example for my son, showing him that opportunities should be grabbed whenever they arise. So I jumped at the chance to revisit the city that intro- duced me to the joys of spontaneity.

This time, I spoke to locals right out of the gate, even joining a group of them on an impromptu shopping trip for designer handbags. I didn’t, alas, score the perfect purse, but by day’s end—my faulty Italian notwithstanding—those strangers were my friends.

See essays about The Best Trip I Ever Took>>