How to create & maintain healthy habits

Help your brain get off the beaten track with these tips for creating healthy habits that stick.

What is a habit?

When we think about the word ‘habit’, we often think about unhealthy tendencies, like smoking or drinking too much but, in fact, much of what we do each day is habitual – such as brushing your teeth after breakfast or buying your morning coffee. “A habit is simply a behaviour you’ve repeated enough times that you no longer make a conscious choice to do it – it just kind of happens,” explains Sydney-based independent psychologist Emmaline Golding. It’s been estimated that 40 per cent of the things we do each day are habitual rather than conscious choices.

Developing habits is how our minds deal with the information overload that comes with everyday life. “If the brain had to pay attention to every single thought every day, it wouldn’t be able to cope,” explains Golding. “So it creates habits to free up space. Habitual behaviour is basically your brain on autopilot.”

The way it does this is by creating neural pathways your thoughts automatically travel down when you do something. The more you repeat an action, the deeper and more entrenched the pathway becomes – just like paths eventually form in grass if everyone walks the same route. For example, if every night after dinner you decide to have a biscuit and watch Netflix, doing that night after night eventually creates a pathway that means once you pick up the remote control, you’ll also grab the cookie without even thinking about if you really want it. That’s a habit.

How to identify unhealthy habits


“Identifying an unhelpful habit is the first step in breaking it, as it takes your brain out of this autopilot mode and brings the activity into your consciousness – a place from which you can make change,” says Golding. However, the biggest mistake people make at this point is to simply try to stop doing whatever their bad habit is – cold turkey. That doesn’t work because, if you’re still eating dinner and switching on Netflix, your thoughts automatically go down the rest of this well-worn pathway. To break a habit, you have to create a new neural pathway for your thoughts to travel down – and the key to this is what psychologists call ‘The habit loop’. “The habit loop describes the process our brain goes through to trigger habitual behaviour,” explains Dr Lillian Nejad, a clinical psychologist in Melbourne

The biggest mistake people make is to try to stop doing whatever their bad habit is – cold turkey. 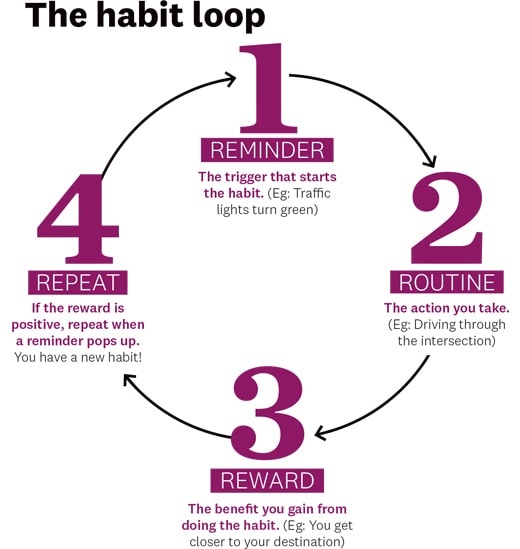 
First, there’s a cue that prompts you to do something habitual – in our example it’s switching on Netflix. Then there’s the action you’ve fallen into in response to that cue – having a biscuit. Then there’s the reward you gain from the behaviour – pleasure from the taste of your snack.

“To change a habit, you have to identify the cues, the routine and the reward that make up your specific habit loop – and then adjust one or more of them,” explains Dr Nejad.

Changing the cue can help because it actively alters the brain process before it starts the habit loop. So instead of turning on the television, you read a magazine to relax after dinner instead. Finding a way you can change the routine helps to stop the habitual behaviour. Don’t buy the biscuits so they aren’t there if you look in the cupboard. And knowing what reward you get from the biscuit helps you find a new way to feel good – and that tells your brain this is a habit we should keep.

“I suggest my clients keep a thoughts diary around their habits to help them with the habit loop,” Dr Carla Rogers, an independent psychologist based in Queensland, explains. “Look at what you were doing before you took part in your habit, what might have triggered it – and can you change that. Then look at what you do as part of the habit and think about how you might alter that. Finally, look at why you want to carry out the behaviour – what does it actually give you in that situation? – and think how you might replicate that in another way.”

This is important as, even if you think you know why you’re doing something, keeping a thought diary might surprise you. One the best examples of this appears in the book The Power Of Habit (Random House, 2013). The author, Charles Duhigg, had gained nearly 4kg by eating a biscuit in the middle of the afternoon every day. At first, he thought he was eating it because he wanted sugar to lift his energy, but by analysing his thoughts he realised that wasn’t it at all. The reward he was getting from his biscuit was actually seeing people when he went to go and buy it. Once he worked that out, he simply cut the biscuit out of the equation and just went to find someone for a chat instead.


What if your focus is not necessarily on breaking an established habit? Instead you’re keen on starting a fresh, healthy one, such as eating more fruit or going to the gym three times a week. Well, you can also use the habit loop to create brand-new healthy habits, too. “This is actually a bit easier to do as all you’re doing is creating a new pathway in the brain – you don’t have to get it to erase an old one,” explains Golding. But you use exactly the same steps.

So, create a cue for your new behaviour by adding it to something that’s already a habit in your life. Scientists call this anchoring. “And it’s a great way to get a new habit started,” says Golding. So, for example, if you want to drink more water, have a glass just before you clean your teeth each day. If you want to eat more fruit, take a piece with you to eat on the train to work every morning.

Once you’ve set up your new habit, keep doing it. Repeating the behaviour over and over again is what creates the habit pathway in your brain. “If you do slip up, don’t dwell on it,” says Dr Rogers. “That creates negative feelings – and the brain likes to create habits around things that make it feel good. If you slip up, just let it go and focus on successfully making the change the next day.”

When things do go right, celebrate that. As Dr Rogers says, your brain only creates habits around things that give you pleasure. Focus on telling it how good you feel with your new healthy routine. “This is easy for something like exercise, as you do get a clear positive boost in your emotions for doing it. But when it comes to something else like making a better choice for your meal at lunchtime, you might have to look a bit deeper,” says Dr Rogers. Focus on how pleased you are with yourself that you made the right meal choice for you; notice any positive changes in energy levels or in how full you feel across the afternoon. The more you tell your brain this is something that makes it feel good, the quicker it will build those neural pathways and the faster you’ll create your new healthy habit.


One thing to remember is that breaking or making habits won’t happen overnight. “You have to be repeating the behaviour over and over again to create a new automatic pathway in the brain,” explains Dr Rogers. “But the more you do this, the more it becomes your new normal.” How long will that take? Well, forget about that old adage that breaking a habit takes 28 days. In fact, when researchers at University College London in the UK asked people to change a habitual behaviour, it took anything from 18 to 254 days for their behaviour to become automatic, with 66 days the average. As such, it may take a bit of time to change how you act – but it will happen. So long as you repeat your behaviour and build that new brain pathway, eventually your thoughts will travel down it and everything will become easier. So easy you won’t even notice you’re doing it.