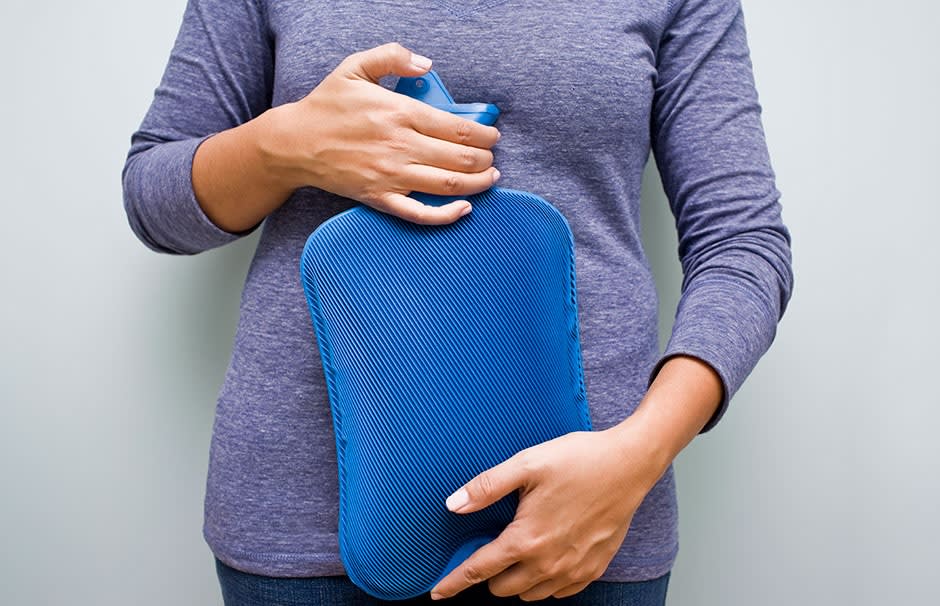 How menstruation can add numbers on the scale.

What causes weight gain during menstruation?

Like most things menstruation-related, the feeling that your period may cause weight gain isn't all in your head. In fact, there are several physiological and psychological reasons why menstruation adds kilograms that may last longer than the week of your period.


Feeling bloated is a common complaint during the menstrual cycle. Elevated levels of the female reproductive hormones estrogen and progesterone lead to a shift in the body’s set point for sodium and cause fluid retention. “This may be the most noticeable to women during the second half of their menstrual cycle, when both estradiol the most potent and common of the three estrogen hormones and progesterone levels are at their highest,” says Heather Huddleston, MD, associate professor, division of reproductive endocrinology and infertility, at the UCSF Center for Reproductive Health.

To keep fluid retention at bay, try to avoid salty foods during the second half of your menstrual cycle. Try to avoid diuretics, says Amy Stephens, MD, a doctor of obstetrics and gynecology at the Cleveland Clinic. “In severe cases some women may be prescribed them, but that should be something done in conjunction with your gynecologist,” says Dr. Stephens.


Your period affects how well your gastrointestinal tract works to push out waste from your body. “Progesterone causes some relaxation of smooth muscle, leading to a reduction in gastrointestinal motility, which may lead to bloating and constipation in some women,” says Dr. Huddleston. To reduce both, increase the amount of fiber in your diet, particularly in the second half of the menstrual cycle, she suggests.


Progesterone plays another weighty role during the second half of the menstrual cycle. It increases appetite, which may cause you to eat more.

To keep from overeating, gravitate towards foods that provide lots of essential nutrients and will keep you feeling fuller for longer such as fresh fruit and vegies, eggs and lean meats.


For most women, their monthly “cycle” starts with at least one of the host of symptoms known as premenstrual syndrome, or PMS, about one or two weeks before their actual period begins. Bloating, food cravings, and weight gain are among the most common symptoms. A study of 259 healthy women with regular menstrual cycles showed significant increases in appetite, protein intake, and total cravings, including those for chocolate, sweets, and salty flavors during the luteal, or premenstrual, phase before menstruation begins.

Experiencing depression or anxiety are also hallmarks of PMS, which is thought to be caused by cyclic changes in the brain chemical serotonin. “For some women, these mood symptoms can also lead to increased food intake,” says Dr. Huddleston. About 3 to 8 percent of women may experience a severe form of PMS known as premenstrual dysphoric disorder (PMDD), according to the American College of Obstetricians and Gynecologists. Food cravings or binge eating are one of the symptoms of PMDD. See a health professional if you experience significant depression or anxiety during PMS, says Dr. Huddleston.

To offset the serotonin drop during PMS or the second half of your cycle, increase exercise which is known to boost serotonin levels and focus on consuming healthy, nutrient-rich foods.


If you experience irregular periods and weight gain, it might be worth a checkup with your doctor. Polycystic Ovary Syndrome, or PCOS, is an imbalance of reproductive hormones that causes metabolism problems. It affects one in 10 women of childbearing age.

For most women, weight gain during menstruation is only temporary. Maintaining an overall healthy lifestyle and diet will keep those extra kilograms from becoming permanent.

5 Health issues than can impact your weight

How to keep motivated when losing weight