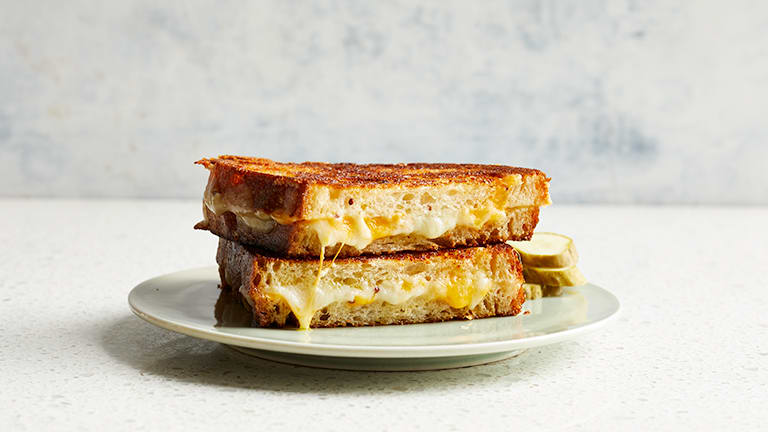 Supermarkets are stocking more plant-based cheeses than ever before—but are these cheeses good for you? And how do they taste? Here’s everything you need to know about the health benefits and flavor of vegan cheese.
By Cheryl S. Grant

The process for making vegan cheese is very similar to that of dairy-based cheese, Hotz says. Here’s how it works: Juice and pulp from a plant are combined with a fermenting liquid (often made from a grain) that causes solids to form. Next, stabilizers and emulsifiers—like carrageenan and xanthan gum—are added to prevent the solids from separating. The last part of the process focuses on taste: A combo of herbs, spices, and yeast extract might be blended in to give vegan cheese a desired flavor, Hotz says.

Love your bagel with a schmear? There’s a vegan cream cheese for that! Craving nachos? A queso-style variety might hit the spot. You can now find hard and soft vegan cheese—in slices, blocks, shreds, and tubs—in many of the same flavors as dairy-based cheese.

The primary ingredient in a vegan cheese contributes to its taste. For example, coconut-based cheese tends to skew a bit sweet, while a cashew-based variety may have a slightly nutty flavor. But manufacturers use salt- or acid-based additives—as well as spices—to tweak the flavor profile, so you can’t predict the taste of vegan cheese by its main ingredient alone.

Can I make my own vegan cheese?

There’s no shortage of vegan cheeses available at grocery stores, but you can also whip up your own with one of the many how-tos floating around online. Or, try a new recipe (you’ll find a few of our favorites below) that gives nutritional yeast a starring role.

The upshot: Should you try vegan cheese?

If you enjoy cheese but want to steer clear of dairy for health reasons or any other reason, sure—try a vegan version! Nowadays, many plant-based cheeses do a good job of mimicking the taste and texture of their dairy counterparts. Just note that vegan cheese and dairy cheese do have nutritional differences, so read Nutrition Facts labels to ensure you’re meeting your dietary needs.

Cheryl S. Grant is a writer, editor, and nutritionist. She has contributed to many publications and websites, including Reader's Digest, USA Today, BET, Glamour, and Family Circle.

This article was reviewed for accuracy in June 2021 by Angela Goscilo, MS, RD, CDN, manager of nutrition at WW. The WW science team is a dedicated group of experts who ensure all our solutions are rooted in the best possible research.